Pochven (Triglavian: POCHVEN) is a region of space controlled by the Triglavian Collective introduced in the "Totality Realized" patch of October 13 2020. It is often referred as Triglavian Space.

The region consists of 27 star systems split to three constellations of 9 stars. Other than the home systems, the gate connections form a simple loop with no branches or dead-end systems.

Triglavian systems are similar to wormholes with additional NPC stations and stargates. 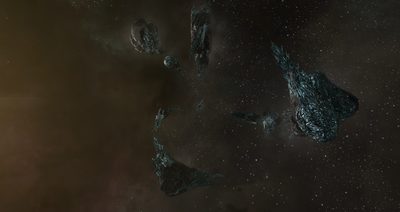 Wormhole to the Pochven Region. 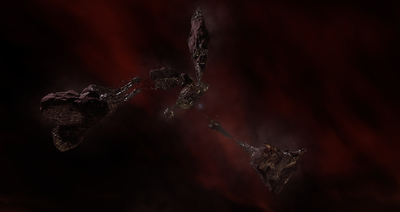 Wormhole leading out of Pochven.

Wormholes leading to and from the Pochven Region:

The forces guarding the wormholes to and from Pochven are different depending on which side you are on:

Note that players with positive (0.01 or higher, NOT 0.00!) standing toward both Triglavians and EDENCOM forces can get into or out of Pochven relatively safely this way.

Region-wide cynosural field jammers stops anyone from lighting a cyno, which means capital ships cannot jump into the Pochven region. Note that similar to how it works in high security space and in incursion constellations, this does not stop capital ships already in the region to jump out of the region.

Filaments allow a Fleet of up to 1, 5 and 15 subcapital ships to enter or exit Pochven.

Stations in Triglavian space have standing requirements for many of their services.

The LP store trades many items for use by players. They require a commodity called Interstellar Navigation Logs that drop from all non-Triglavian NPCs that spawn all over Pochven.

All blueprints are 1-run and are effectively consumed once used.

If players wish to gain positive standings with both EDENCOM and the Triglavians so they can travel through all of hisec without being bothered by them again, they can do so relatively easily in Pochven, provided they do not already have negative standings. Killing NPCs in Pochven other than EDENCOM or Triglavian forces will reward the player with a small standing increase with both factions. The easiest method to do so is to use a destroyer to kill a single weak Rogue Drone in Pochven. For more detailed standing guide see Getting positive Triglavian and EDENCOM standings.

Ore anomalies contain practically every single mineral available from K-Space, with the exception of Mexallon and Pyerite, which must be imported from K-Space in order to manufacture products requiring those minerals.

Asteroid belts do not spawn in Pochven systems.

Home systems will spawn higher-yield Spodumain and Mercoxit, as well as containing "Hadal" and "Abyssal" higher-yield ores that can be reprocessed for a 5% and 10% increase in mineral yield.

The ore deposits are named differently depending on the type of system.

There may also be Ubiquitous Mineral Fields that can spawn in system, which can be mined for reaction materials like Neodymium.

Ice belts can still spawn in systems that once frequently spawned them before Pochven was formed, though at a reduced rate than before.

IMPORTANT NOTE FOR MINERS: Roaming fleets of EDENCOM, Triglavian, Rogue Drone, Sleeper and Drifter ships can warp to these sites. If one does not have neutral/positive standings with the rats, immediately warp out unless you are confident that you can take on them.

In some situations, NPC fights can take place at these anomalies.

PLEASE NOTE: Wormholes in Pochven spawn FAR more rats compared to in combat anomalies. It is HIGHLY RECOMMENDED to clear out the wormhole sites with multiple people; the damage output can become very high, even if the guarding rats are Rogue Drones.

Wormholes in Pochven spawn multiple waves of rats on them. The roaming rats and perhaps the combat sites in the system depend on the spawned wormhole. The roaming fleets of rats are not to be taken lightly; they often include normal and stronger rats and very few scout-type rats. For example, if there is a wormhole leading to W-Space in a Pochven system, the roaming fleets will often consist of "Hypnosian" and "Aroused Hypnosian" rats, which are quite strong and are very difficult to tank and kill. Sometimes they can spawn with Drifters, which are extremely dangerous to deal with and are not to be taken lightly.

All Wormholes can jump up to Battleships and will not let capital ships through. They all last 12-16 hours before collapsing.


The C729 entrance is most common and spawns in high and low security space in systems within a few jumps of the destination system in Pochven (before the region was created). The C729 identifier is present on the K-Space side, and the default K162 signature is present on the Pochven side.

In most Pochven systems, C729s are static wormholes.

Clearing all NPCs spawned on a wormhole will award ISK from the Triglavian Collective when completed. Please note that the rats often warp around and are often significantly harder to clear than rats in combat anomalies.

The majority of the combat anomalies are almost impossible to run solo. The only exception would be Rogue Drone sites (which can be run in a smartbombing battleship or sniper) or Convocation Watchpost sites (about the difficulty of an Emerging Conduit).

The Incipient Drone Swarm, Convocation Watchpost, EDENCOM Scout Fleet and Torpid Sleeper Hive anomalies are ungated, while the rest are behind acceleration gates. All sites will pay out ISK (and DED LP in the case of the World Ark and the Stellar Fleet site) when they are completed.

Triglavian and EDENCOM roaming fleets will aggress players who do not have neutral or positive standings with them. Drifters, Rogue Drones and Sleepers appear hostile to all players regardless of neutrality or standings and will roam around systems periodically, switching locations every 10-15 minutes.

Rats can warp to planets, moons, stations, the sun, wormholes and ore anomalies.

Unlike NPC behavior in K-Space, the five main Pochven factions are extremely aggressive to each other and will attack each other on sight if they meet each other on grid. They will call in reinforcements if enough NPC ships are destroyed and often result in massive fights breaking out at random locations. These fights often attract players wanting to help destroy NPCs for standing ticks or for nabbing loot and salvage dropped from ship wrecks left behind at a fight location.

Important note: As of 4/5/21 Triglavian and EDENCOM ships have been confirmed to attack players during these multi-faction fights, even those friendly to those factions. This often happens when a player aggresses a target that the ships friendly to them are attacking already.

There also appears to be a bug in the NPC AI where hostile ships do not attack players until one of them is destroyed.