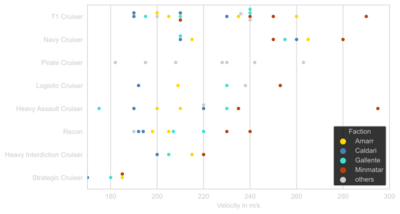 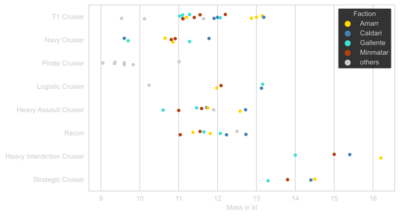 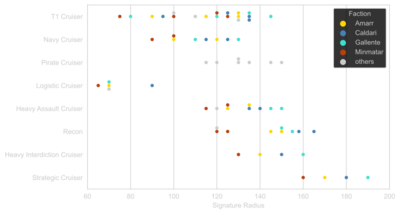 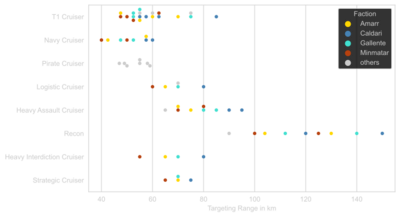 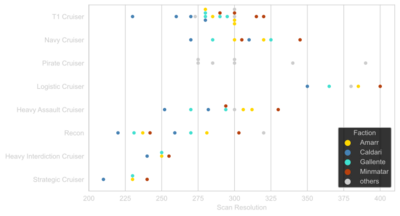 Cruisers are EVE's medium-sized ships, larger than frigates and destroyers but still much smaller, faster and nimbler than battlecruisers and battleships. Cruisers mount medium-sized weapons and modules. Tech 1 cruiser hulls cost around 10 million ISK and tend to be the first major financial step up from frigates for new pilots.

There are four classes of Tech 2 cruisers, which are more powerful, more focused on a particular role and much more expensive than their Tech 1 equivalents:

Cruisers and destroyers are the only ship classes that currently have a Tech 3 version, the strategic cruisers and tactical destroyers.

Each race has four tech 1 cruiser hulls, divided into several roles. One is an EWAR cruiser, one fills a logistics role, one is a tankier combat cruiser, while another is a speedier attack cruiser.

In PvP some tech 1 cruisers, such as the Gallente Thorax and the Minmatar Rupture, can bring surprising amounts of DPS to a fight. The electronic warfare cruisers can also be important in PvP, as they are slightly tougher ewar platforms than their frigate equivalents and in some cases can produce better ewar (the Caldari Blackbird, for example, can mount ECM with a longer range than the Griffin ECM frigate). In PvP cruisers can also fit tackle to provide some secondary tackling that's harder to scrape off than Tech 1 tackling frigates.

Tech 1 cruisers are the ships most commonly used to run Level 2 missions.

Each empire faction has two faction cruisers: one based on a T1 combat hull, the other based on a T1 logistic hull but now bonused for DPS. They can be bought through LP.

Pirate faction cruisers cover a wide range of specialisations. They all gain bonuses from two empire cruiser skills. Their blueprint copies can drop from certain NPCs or be obtained through the faction's LP.

Every T1 cruiser hull has a corresponding T2 hull which is even more focused on its specific role. As you need the T1 skill at level five, T2 cruisers can take a long time to train into.

Recon Ships are tech 2 electronic warfare cruisers. These come in two varieties, combat recons and force recons. Force recons can fit a covert ops cloak and therefore can warp cloaked, while combat recons are generally better in actual combat, either because they have stronger tanks, more damage, or better range for their electronic warfare systems. Combat recons are also invisible to D-scan at all times, and Force Recons are also able to light both standard and Covert Cynosural Fields.

In either case, whether through covert cloaking or D-scan invisibility, Recon Ships give their enemies no advance warning of their presence before they enter a fight.

Caldari recons only have bonuses to ECM, but consequently can mount the strongest ECM in the game.

Extremely long-ranged warp disruptors and scramblers (at Recon 5, can project a T2 Scram 18km or a T2 Disruptor 48km without overheating), and increased Sensor Dampener strength.

Extremely long-ranged webs (at Recon 5, can project a normal web out to 40km without overheating), and bonuses to target painter strength.

Heavy Assault Cruisers (commonly called "HACs") are extremely straightforward but powerful ships. They combine moderately high damage with extremely tough shields and armor, and can be used easily as fleet-issue short-ranged brawlers or long-ranged snipers. They are often slower than tech 1 cruisers, but still far faster than battlecruisers or battleships.

Besides their obvious PvP applications, some HACs are also useful PvE ships because they combine substantial tanks and DPS with unusual mobility. This can be useful in, for example, running exploration sites in lowsec or nullsec, where pilots might need to make a quick getaway.

Heavy Assault Cruisers can use the Assault Damage Control module, an alternative to the regular Damage Control which provides lower passive resistances but can be activated once every 2.5 minutes to provide around 9-11 seconds of near-invulnerability.

The role of Heavy Interdiction Cruisers ('HICs' or 'hictors') is heavy tackle. They have an extra 20% resist to increase their tank and are capable of fitting the Warp Disruption Field Generator, a module which can either project an Interdiction Field around the ship or be focused into an "infinity point", a single-target warp disruptor or scrambler that no number of Warp Core Stabilizers can resist.

In Wormhole space, HICs can also use the unique Zero-Point Mass Entangler module to nearly immobilize themselves but reduce their mass to that of a shuttle, for use in rolling Wormholes.

The Tech 2 Logistics Cruisers follow the same rules as their Tech 1 forms: Amarr, Gallente, and Triglavians repair Armor, Caldari and Minmatar repair shields; Amarr and Caldari ships rely on a Capchain, Gallente, Minmatar, and Triglavians rely on local cap regen. This means that Amarr and Caldari logistics cruisers are more vulnerable to ECM but that they are extremely resistant to Energy Neutralizers and can also send capacitor support to their allies; while the Gallente, Minmatar, and Triglavians are more vulnerable to Energy Neutralizers, and generally need to sacrifice some of their tank to maintain cap stability. The major functional difference between Tech 1 and Tech 2 Logistics Cruisers is that Tech 1 Logistics Cruisers are intended to only use 3 Medium Remote Repair modules, while Tech 2 Logistics cruisers are intended to use 4 Large Remote Repair modules.

Strategic Cruisers, or T3 Cruisers, are advanced and highly customizable ships that in many cases are more comparable to Battlecruisers than cruisers. Their choices in subsystems allow them to fill similar roles to almost any other type of cruiser or battlecruiser, potentially fill multiple roles at the same time, and reconfigure themselves to completely change roles, in space, using a Mobile Depot.