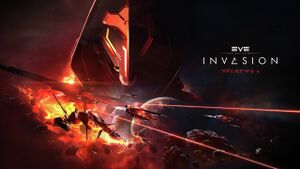 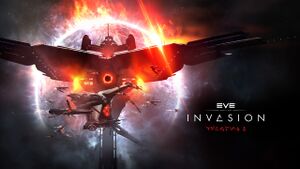 "A Triglavian Invasion is underway in your vicinity! Join the fight and help drive the invaders out, or relocate immediately if you are unprepared for battle. Any technology or equipment left by the invaders will be yours to loot."

Triglavian Invasions are a new type of PvE content introduced with the Invasion update in May 2019. The new content sees the Triglavian Collective taking over constellations of known space, and sending out patrols in these systems that will attack capsuleers. Attention: It is not even safe to warp from gate to gate - there may be a very strong fleet camping at a gate and destroy your ship.

With the release of the final chapter of the Triglavian Invasion, this content is no longer in the game. Visit the chapter 3 page for information on the current Invasion.

The skybox of a system under Triglavian invasion

The systems under Triglavian invasion will have wandering fleets of Triglavian ships. These fleets will attack player owned Upwell structures and hang around celestial objects or in deep space.

The fleets can call for reinforcements during fights. Fleet size and composition depends on the system status.

Triglavians that are on a warpable celestial can be located by a skilled d-scanner. But for serious Triglavian hunting you will want a dedicated combat prober.

There are six types of ships found in Triglavian fleets: the Damavik, Kikimora, Vedmak, Rodiva, Drekavac, and Leshak. All of these enemies deal Thermal and Explosive damage (usually around 60/40 TH/EX), and almost all of them have remote armor repair abilities. They have thin shields, thick armor, and are weakest to Thermal > Explosive > Kinetic > EM. However, beyond these constants, there are several named variations of each enemy type. Each name represents a specific extra ability that ship has. Not every variation exists for every ship size, but every size has several variants that appear.

The invaded constellation will also spawn Conduit sites. These will appear as combat anomalies in the probe window. Once a ship initiates warp to a site, the site will also appear as a beacon on the overview. When completed, the site will not disappear from the probe scanner, but the beacon will be renamed to "Sealed [site name]".

These effects do NOT decline as the invasion is run and are present at full strength for the duration of the invasion.