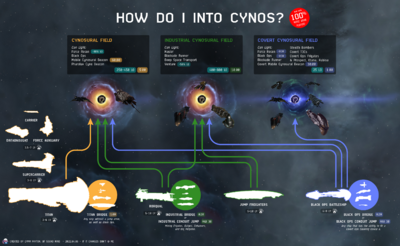 Jump Drives are a means of interstellar travel, and the main alternative to the standard network of stargates. Ships with built-in jump drives can use their drives to instantly travel to a friendly Cynosural Field or Pharolux Cyno Beacon in another star system, within a limited range and at the cost of consuming Isotopes as fuel.

All capital ships, Jump Freighters, and Black Ops Battleships have built-in jump drives. Jump drives allow for rapid movement and deployment of both subcapital and supercapital ships across long ranges, and are commonly used for defensive, offensive, and logistical purposes.

Unlike stargates, which are free to use, jump drives require fuel. The jump drive comes with a special fuel bay. The fuel required depends on the faction that constructed the jump drive, and can be produced by refining corresponding ice. The respective fuel type for each faction is:

The fuel cost for each jump does not depend on the number of stargate jumps to the destination. It depends on the straight-line distance between the two systems in space, measured in light-years. Each jump drive has a maximum jump range, and consumes a certain amount of fuel per light-year. These qualities are modified by skills:

Finally, activating a ship's jump drive consumes 95% of the energy in its capacitor (reduced by 5% per level of Jump Drive Operation). Because Jump Drive Operation level five is required for the Jump Drive Calibration skill, it is usually assumed to be at level five. At this level, 71.25% of the capacitor is consumed which rounds up to 75% in everyday communications and is colloquially called "jump cap". Because of the huge amount of cap needed for jumping capital ships usually have a capacitor booster fitted. But, in special cases you would rather fit cap rechargers and capacitor power relays to reduce the amount of time between jumps.

The amount of fuel used in a jump can be calculated with the following formula.

Cynosure (pronounced like "sigh no sure") is a little-used word outside of EVE. It means a guide, or a person or thing that draws attention towards itself. It originates in the ancient Greek name for the North Star, making it a very appropriate term for the cynosural fields of New Eden.

Cynosural Fields come in three varieties: normal or so-called "hard" cynos, covert cynos, and industrial cynos. The three types differ in important ways in their equipment requirements, in their fuel use, and in the ships which they can transport. 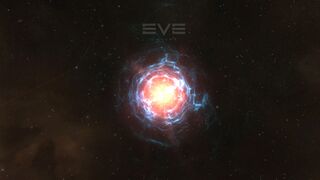 Ships with a jump drive can only jump to cynosural fields or beacons. Cynosural beacons are provided by a player-deployed navigational structure, the Pharolux Cyno Beacon (colloquially simply called "beacon" or "cyno beacon"). Cynosural fields are generated or "lit" by the ship module Cynosural Field Generator I. Cynosural fields and their generators are colloquially abbreviated as "cyno". A normal (or "hard") cynosural field can be seen on the overview from any place in the system and is "warpable". Further, it appears on the universe map.

Cynos can only be lit in null and low sec. Cynos cannot be lit in high sec, and while they can be lit in wormhole space they serve no purpose as jump drives cannot jump to systems in wormhole space. Mobile Cynosural Inhibitors prevent the activation of cynos in a 200km radius but do not remove existing cynos. Solar systems as a whole can be cyno jammed either through the navigation structure Tenebrex Cyno Jammer or a Sansha Incursion.

If you want to light a cyno you have to be in a fleet (only fleet members can jump to that cyno) and slower than 500 m/s. After you light the cyno your nominal speed becomes zero but you continue to drift and can also be bumped, but the cynosural field stays at the position, where you lit it. Further, you cannot dock in a station or structure and cannot eject, but you can self destruct. Indeed you can light a cyno after you initiated the self destruct sequence. This is used as a trick for extra safe traveling. The cyno needs several seconds until it appears on the universe map. If you light the cyno shortly before you self destruct and immediately jump to it, you can minimize the risk of being caught. But, be aware that if you jump to a cyno in the same moment as the cyno ship dies, you still jump but you land at the destination system's star, not at the former spot of the cyno.

As of the September 2019 release, cynos can only be fitted to Force Recons and Black Ops Battleships. Both Force Recons and Black Ops (except the Marshal) have 50% reduced cycle time for cynos (both normal and Covert), but Force Recons add an 80% fuel cost reduction on top of the reduced cycle time (reducing the duration to 5 minutes and only 50 Liquid Ozone). Because of this change, recent cyno vigils have typically been done with hulls that can fit an Industrial Cynosural Field instead.

Unlike a normal cyno, a Covert Cynosural Field is only visible on the overview if you are on grid and can be generated even in cyno jammed systems. The module to generate a covert cyno is named Covert Cynosural Field Generator and can only be fitted to certain ships. Those are Black Ops Battleship, Blockade Runners, Covert Ops Frigates, Force Recon Ships, Stealth Bombers, and Strategic Cruisers (with the covert subsystem); further, the single hulls Etana, Prospect, and Rabisu. As a rule all ships which can fit a covert cloak (except the Sisters of EVE ships) can fit a covert cyno.

Industrial Cynos are sometimes used for their visual effect during "cyno vigils" to remember eve online players who died in real life. If other pilots are aware of such an occasion, they usually don't attack those vigils out of piety.

A (Covert) Jump Portal Generator allows the user to create a bridge to another system. The Jump Portal Generator can only be fitted on a Titan, and the Covert version only to a Black Ops Battleship. They are high-slot passive modules which enable the bridge function of the ship. The module will visibly activate and cycle while the bridge is active, but cannot be manually activated.

As of the October 2014 Phoebe release, traveling using a Jump Drive, Jump Portal, Jump Bridge, Covert Jump Drive or Covert Jump Portal causes fatigue to capsuleers and a delay is required between successive jumps. This delay is determined by the jump fatigue mechanic. Jump fatigue is presented as a time value, indicating the time it will take to decay to zero, and can accumulate to a maximum of 5 hours. It decays in real time, whether logged in or not. Jump fatigue is recalculated after every jump.

These mechanics mean that ships can use their jump drives in quick succession twice, before going on a much longer delay before a third jump. This has huge implications for both defensive and offensive deployment of capital ships, and is a major factor in the so-called capital or supercapital "umbrella"s projected by larger lowsec and nullsec alliances: Any system within capital/supercapital jump drive range of an alliance's staging system can have capital ships jump drive in, and then a few minutes later jump drive out; but any system beyond one jump's range is essentially a one-way trip, as two jumps in quick succession are needed to reach the destination, and making a second jump forces a long delay before the third jump. The result is that any systems covered by the umbrella are extremely easily defended using capital/supercapital support (as a capital response fleet can jump in to rescue an ally, wait six minutes, and quickly jump back home and dock), while any ships beyond one jump's range are much more vulnerable to attack (as the 30-minute delay after the second jump means that any capitals which do make two jumps will be in space and vulnerable for a much longer span of time).