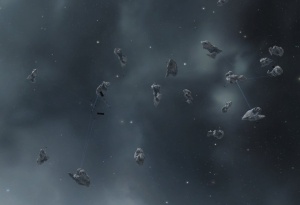 Ice harvesting is the process of obtaining resources from ice fields (commonly called "ice belts"). This mined ice can then be refined and used to fuel capital ship jump drives, manufacture fuel for player-owned starbases and structure services, and light cynosural fields. Ice harvesting requires specialized modules or drones, and so is generally only performed by the same ships used for regular mining: Mining Barges and Exhumers, Expedition Frigates, Industrial Command Ships, the Rorqual, the Capital Industrial Ship.

Unlike the various ore mining tools, ice harvesting tools always harvest one block of ice (with a volume of 1000 m3) per cycle; because of this, the best method of harvesting ice more efficiently is to decrease the ice harvesters' cycle times. 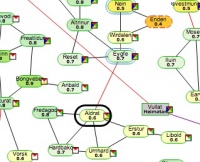 A map of the Metropolis region from dotlan. The Eygfe system has an ice belt, as shown by the thin blue ring around its box. 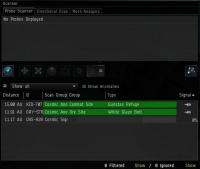 A scanner window showing an ice belt. Note that, since ice belts are Cosmic Anomalies, they can be warped to immediately (without needing to use scan probes).

Ice belts can be found in every region of New Eden, but only in specific systems,[1] and each system contains 1-3 ice belts. Ice belts disappear once mined out, and then respawn 4 hours later. This timer remains in force even across downtime; unlike asteroid belts, ice belts will not respawn immediately after downtime, and will instead continue to respawn 4 hours after they were last depleted. Also unlike asteroid belts, ice belts are a type of Cosmic Anomaly, meaning that they will appear in a different location in the star system every time they respawn, and can be found using a ship's onboard scanner, though they do not require scan probes to find.

Like asteroid ore, unrefined ice takes up a large amount of space and can therefore be time-consuming to transport. The best sub-capital ship for transporting ice (and ore) is the Miasmos, a Gallente industrial which can transport up to 63,000 m3 (63 blocks, or about two loads from a Mackinaw) of ice. If you need to haul even larger quantities, it may be worth training to fly a freighter (which can hold over ten times as much), or to ship the ice by courier contract.

Ice can also be compressed in Upwell Structures with active Standup Reprocessing Facilities, or by a Rorqual with an active Industrial Core. Compressed ice takes up only 100 m3 per block, and like compressed ore, compressing ice does not change its reprocessing yield.

Like asteroids and ore, different types of ice spawn based on the racial quarters of space. Faction ice (both normal and enriched) will spawn only in that faction's quarter. As with asteroids, more valuable ice spawns at lower security ratings, and each system can spawn all ice types of higher-security systems in the same quarter.

The core skill for ice mining is the (appropriately named)

Ice Harvesting, which reduces the cycle time of ice mining modules by 5% per level. Train this to level V to use the Tech 2 ice miner.

Mining Upgrades is needed to install mining upgrade modules (which further decrease the cycle time of ice miners). Lastly, the

Exhumers skills are needed to fly ice mining ships; training higher levels of these skills also decreases the cycle time of ice mining modules (depending on the bonuses of the ship being flown). Since most mining modules are fairly CPU-intensive (and fitting ice mining upgrades only makes this worse), you will probably need to train some fitting skills to take full advantage of your ice mining ship.

The Prospect and the Endurance can both fit Ice Mining Lasers, but the Endurance has bonuses that reduce the cycle duration. They are much more maneuverable and can fit cloaking devices, making them well suited to operating in dangerous wormhole space.

Mining Barge). As with standard mining, each hull is suited for a different style of mining, but none have any particular focus in harvesting ice resources. For example, the Covetor has an extra role bonus to ice mining yield (25% reduction in cycle time and activation cost) and 5% bonus to range, the only one with such a bonus amongst the three barges, but however it also has a fairly small ore hold (7000 m3), and will fill up fairly quickly. The Procurer and the Retriever have a bonus of 2% each and the same ice mining yield, and each ship has a different strength (the Retriever has a very large ore hold, and the Procurer a very tough tank). While all Barges now use two ice harvesters, the Procurer only has two low slots, while the Covetor and Retriever each have three allowing for an additional harvester upgrade. As when using these ships for ore mining, the choice depends on your play style. Flying in a dangerous region of space? Use a Procurer. Want to mine for long stretches without returning to a station? Use a Retriever. Want to get the absolute maximum amount of ice you can? Use a Covetor.

Exhumers are straight upgrades from their Mining Barge counterparts, and the same reflections hold true for them. One small difference is that both the Skiff and the Mackinaw get a smaller (2%) reduction to ice harvester cycle time per level of

Exhumers (the Hulk gets a 3% reduction per skill level). The Skiff also gets an additional low slot giving all three Exhumer three low slots, unlike its Barge counterpart the Procurer.

With the release of the Ascension, the Orca, Rorqual, and the newly-introduced Porpoise all have bonuses to ice harvesting drone cycle time. As a result, these ships have become viable ice harvesting platforms post-Ascension.

Ice harvesting drones do exist, and are in fact the only way for the Porpoise, Orca, and Rorqual to harvest ice. However, ice harvesting drones use considerably more bandwidth and drone bay space than their ore mining counterparts (50 vs 5 Mbits/s / m3), so most ships can only field a single drone of this type and the Rorqual, with the maximum amount of bandwidth (125 Mbit/s) can only utilize two at a time.

In contrast with ore mining, all ice mining modules mine exactly one unit (1000 m3) of ice per cycle; therefore, the only way to increase your mining efficiency is to decrease your modules' cycle time. This can be done by training skills (see above), installing more advanced ice mining and mining upgrade modules, fitting Ice Harvester Accelerator rigs, flying more advanced ships (Exhumers instead of Mining Barges), or using implants (the IH-100x Inherent Implants 'Yeti' Ice Harvesting series). Additionally, if you are in a fleet, you can receive further bonuses through fleet boosts.

While each bonus may seem small, when taken together they can make a significant difference:

A beginning ice miner with very basic skills (Mining Barge I and Ice Harvesting I) fits her Covetor with two Ice Harvester I modules and goes looking for ice. Once she finds a suitable ice field, each of her two miners can mine a block of ice every 2 minutes and 28 seconds.

If she then spends some time training her Mining Barge and Ice Harvesting skills to level IV, she will have lowered her cycle time to 2 minutes and 13 seconds, an improvement of about 12%. Wanting to improve her yield further, she installs two Ice Harvest Upgrade modules on her Covetor (with some training to Mining Upgrades IV), which drops her cycle time to 2 minutes.

She then upgrades her ship to a Hulk (with some training to Exhumers IV), and installs an Ice Harvester Accelerator rig for good measure, which brings her cycle time down to 1 minute and 53 seconds. Going for broke, she upgrades all her modules to their Tech 2 variants, adds a third Ice Harvest Upgrade II and trains her skills to level V, dropping her cycle time down to 1 minute 17 seconds, for a total reduction of 48%.

As mining ice often turns into a race, with large number of miners competing to mine as much ice before the belt is emptied, having short cycle times can be an advantage beyond simply mining more ice in a given period of time. This allows you to beat your competition to those last few pieces of ice in a belt (as, if two miners are attempting to mine the same asteroid with only one unit of ice left, whoever finishes their cycle first gets that block of ice, and the other gets nothing). Using a survey scanner can be very helpful, as you can see how much ice is left in each asteroid.

Because of the popularity of systems that contain ice anomalies, they have become targets of regular and perpetual ganking activities. The following tactics may be useful in particular by Ice Miners:

Below are the systems that spawn ice anomalies within empire space, organized alphabetically.