Note that it is the stat bonus that is affected, not the module itself. For example, if you fit both a Nanofiber Internal Structure (boosts agility and velocity) and an Overdrive Injector System (boosts velocity), the Nanofiber's velocity bonus would suffer a stacking penalty, but not its agility bonus. Similarly with armour or shield resistance modules: if you fit an EM hardener, an explosive hardener and an omni-hardener (Multispectrum Shield Hardener or Multispectrum Coating): the EM/Explosive resistances from the omni-hardener would be stacking-penalized but the Kinetic/Thermal resistances would not. 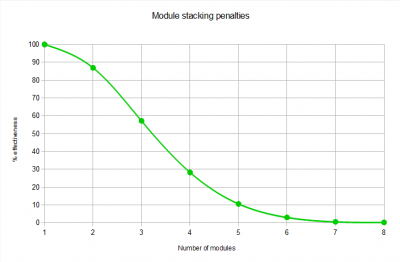 Bonuses from overheating sometimes follow same stacking penalties as normal bonuses. But this is not always the case.

Many overheating bonuses are not stacking penalized simply due to the fact that there are no modules or effects that would modify the same stat as the overheat bonus.These modules are considered to be not stacking penalized until an effect that modifies same stat as the overheat bonus is released.
Modules with no overlaping effects: