From EVE University Wiki
Jump to: navigation, search
This article should be cleaned up or improved.
The reason is: This page is written like it's a guide but its style should be that of a wiki page.

Jump freighters are the Tech 2 Freighters that use cynosural fields to move between systems, which allows ships to move around the universe in nullsec and lowsec without the use of stargates. Jump Freighters contribute notably to the availability of modules and items into the outreaches of the universe, and represent the way those items are primarily moved between empire space, nullsec, and player-staged systems. For a well-experienced pilot, they are also one of the most safe ways to transport goods into and through the harshest conditions. For most people however, it is best suited to contract the services of reputable player-operated hauling services, or lean on their corporation-provided jump freighter services should they offer them.

Jump freighters have much larger potential tanks than freighters when properly fit, but at the cost of a much reduced cargo bay. All jump freighters can exceed 500,000 EHP in tank, which makes ganking them in highsec extraordinarily difficult and expensive. At the same time their value makes them attractive targets for gankers.

The four Jump Freighters are:

Before getting started with Jump Freighters, you should already have a comfortable familiarity with hauling concepts and the mechanics of operating Freighter-class ships. This article should be considered an advanced guide that is built on-top of a number of existing articles, and it’s recommended that you become familiar with general hauling concepts before focusing on the content in this guide:

The use of jump freighters requires a significant initial capital cost between the skills necessary to train operating the ships, the cost of the jump freighter itself, as well as appropriate selection of modules. As of 2021, this cost is approximately between 15 and 20 billion ISK depending on the jump freighter that you end up choosing. Sophisticated jump freighter operations also involve a dozen or so alternate characters, all of which require Omega clone status for their use. As such, the characters involved in the entire operation require notable investment, both initial and operationally.

In the context of Jump Freighters, there are at least three roles frequently discussed:

To operate a jump freighter most efficiently, you should have more than two EVE accounts where one account you have a jump freighter trained, and on the others you have 1 or more cyno alts. Those that invest in multiple cyno alt EVE accounts generally optimized that investment by performing other activities on those characters, such as passive skill farming and using those cyno alts for activities like planetary industry and reactions.

Other players can take on the roles above, but it makes the logistics of conducting a jump plan more difficult.

The following are the minimally required skills. While it may be possible to pilot a jump freighter prior to achieving these levels, it is not recommended.

These are your core jump freighter skills that make the most impact on the availability of your routes and operational efficiency.

To train the above skills you need at least:

While not specifically required, these are also recommended, and make up a subset of the Magic 14 skills:

Other modules used during fits may also require skill investment.

The alternate characters that will serve as your jump destinations have far fewer requirements:

Jump clone skills will be helpful considering you will want to place clones in strategic locations for all your cynosural alts, and gives you more versatility while reducing the necessity to invest into multiple cyno alt EVE accounts:

The table below outlines the four current Jump Freighters, as well as the associated commonly cited statistics when the relevant skills are fully trained.

There are three low slots in every jump freighter. Each slot is generally fit with the same module depending on the use case and objectives:

Generally you want to carry a set of three for all four modules with you at all times.

The most frequently used ship for a cynos are Ventures. These are small mining frigates that are agile, but only hold enough fuel to light a single instance before having to go refuel. Otherwise, any T1 hauler works, or more specifically, any other ship that is able to fit the Industrial Cynosural Field Generator. When choosing a ship as well as fitting for a cyno, you should also bear in mind that you should expect to lose cynos frequently, so it’s recommended to use cheap ships and cheap fits.

The key components that are necessary when fitting a cyno are:

You might consider insuring the cyno ships as well, or at least the ones in your lowsec exit.

If you’re prioritizing efficiency, what saves you the most time is the acceleration, deceleration, and time spent in warp. However, getting off-grid more quickly will keep your ship safer. 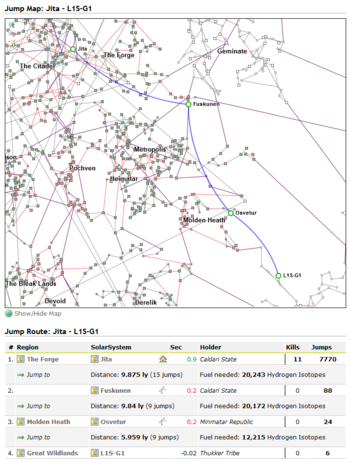 An unoptimized Jump Freighter route between Jita and an arbitrary system in nullsec using DOTLAN's Jump Planner tool for demonstration purposes. Even though it is optimized for the shortest route in terms of travel distance, the midpoints lack NPC stations. It may also be preferrable to select midpoints with highsec entrances even though the Jump Freighter would be moving outbound. Lastly, there could be adjacent midpoints that are more suitable based on their activity levels.

Jump freighters cannot use their jump drives and cynos to jump into highsec space, but they can jump out of highsec space. Thus, whenever you want to bring a jump freighter into high security space, you need to jump the freighter into a system adjacent to another highsec system and pilot your way to your destination as you would in a normal freighter. The travel beginning from your highest exit to your destination in highsec is the riskiest part of the journey.

When developing a route, especially between highsec and lowsec / nullsec, system choice is important. In the context of the route, these systems have special names:

You have much more freedom when selecting systems between your origin and your highsec exit, but there are still a handful of considerations when choosing any station along your possible route.

If you’re reading this guide, each system along the way through any security space that you choose should contain an NPC station. This enables station reliability as well as the means to log off should something occur outside of EVE. As you become more experienced, you can be more considerate of your route while acknowledging additional risks that it brings (e.g., relying on systems with player-owned structures, etc). When viewing a station in game in the Solar System Information window, and when you view the “Structures” tab, if you see a station listed on that tab you are able to dock there. If you jump to a player-owned citadel, make sure you trust the operators so they don’t lock you out after you light the cyno.

Likewise, there are certain station designs that make them unsuitable or risky for use as midpoints. In particular there may be station models that make it more difficult to plant a reliable cyno tactical, but more importantly are stations that are known to be kick-out stations. These are stations that give you little to no time to redock after undocking since it “kicks” you out of the docking ring very quickly.

You might also want to consider having one or more midpoints also having a highsec exit, in case you want to refuel or enable your cyno alts to have easier access to highsec, such as when they are popped or if you want to be bringing in additional cynos.

In summary, your midpoint selection should be a function of system activity, station availability and design, and consideration of fuel costs.

One of the most important parts of your planning is selecting a highsec exit. DOTLAN Jump Planner is a nice tool for routing purposes, but it will not choose a decent highsec exit system. This will have to be done through your own investigation, for which you can subsequently add as a waypoint into the jump planner. However, other functions on DOTLAN are beneficial for the purposes of selecting a highsec exit.

Before you begin to make a selection of systems, you should also become familiar with the general topography between your origin and destination, particularly around the highsec / lowsec boundaries while optimizing for distance. A mix between the DOTLAN map and the in-game map may be most useful for getting a sense of system orientation for this specific purpose.

The range tool on DOTLAN is helpful to finding highsec exits near a specific highsec system, but they may not be in the direction of your travel. Once you select a set of candidate highsec exits, there are some characteristics you should evaluate for each candidate:

Once you’ve planned a route you need to now work on ensuring you have the appropriate bookmarks for each station in the systems you have along your route for all characters involved, both cynos and the jump freighter. For example, both the jump freighter and cyno alts require insta-docks for every station. These are bookmarks immediately on the undock that guarantees your ship will be able to dock to the station. Using the “dock” command that involves your ship warping may cause you to be put outside the docking ring. These bookmarks will place you within a 2.5km radius of where the bookmark is placed, so make sure they are also placed where you will not bump off the station. These are used most frequently as the landing point of your jump freighter when navigating it, and reducing the time between landing on-grid docking.

The most important set of bookmarks you need are those for each station on your cyno alts that represent the *specific* location that you will light your cyno. These need to be clear of obstacles (the station) while remaining in the docking ring of the station. More specifically, the center of the bookmark plus a spherical 5km radius, or 10km diameter, must be fully within the docking ring and the radius of the sphere must not intersect with any component of the station. Your jump freighter will be landing on any point within that sphere when you jump to your cyno. Every station in EVE is a different model, and collision model. Stations of the same model can have the same tactical location in their respective locations. Be aware of towers and other components of the stations that can intersect with the sphere. As described above during the station selection, some stations have notably small docking rings, while some of those stations with small docking rings may also be kick-out stations, and some docking “rings” are not actually fully spherical.

Important Note: This is not a complete summary; It only serves to introduce the importance of cyno placement. If you’ve reached this point it’s required to detour and read a very useful guide on Reddit about cyno placement for jump freighters.

There are a common set of threats you should be mindful of when piloting your jump freighter. Outside threats generally occur, or initially triggered, after you have jumped into a nullsec or lowsec system (as your cyno makes your presence to the rest of the system known), or during gate transitions within Highsec space or on your Lowsec exit. Threats of your own are generally due to being ill-prepared for your journey.

At this point, you should already have your route planned, with your cynos, their equipment, and jump clones staged. Some of these take the form of establishing habits, and are important to continue doing especially when you feel comfortable.

Before you execute a route on Tranquility for the first time, make sure you have practiced much of what is discussed in this guide on the test server.

Before you leave your initial station, you should:

Here are other useful recommendations during your journey, and tactics to employ: