Players can freely create up to three characters on each account, but because only one character per account can be logged in at a time, some players choose to pay for additional, separate accounts in order to use multiple characters simultaneously.

How to create an Alt

To create another character on the same account, log out of EVE Online. When you log in from the launcher you will first see a page where you can select which character you want to log in with. If you don't already have three characters on your account there will be an option to Add Character (see the thumbnail to the right). This will take you to the character creation screen.

Players can create as many accounts and they want. Since the Ascension expansion in November 2016 players have been able to create Alpha Clones, which are characters on an account with no active subscription (i.e. "free to play"). Characters on accounts with paid subscriptions are now known as Omega Clones. However, Alpha Clones have some restrictions, notably if a player is logged into an Alpha account they cannot log into any other account at the same time, whether Alpha or Omega. They also have slower training speed and heavy restrictions on the skills they can learn and ships they can fly. This does somewhat limit the usefulness of Alpha Clones for Alts for some tasks. To create a new account go to CCP's Create an Account page and select whether you wish to create an Alpha or an Omega account.

While having an Alt can be useful, there are a few notable restrictions to using multiple characters on the same account. Firstly, you can only log in to one character per account at the same time. So if you want to switch from one character to another players need to log out and then back in to EVE Online. The same restriction applies if either of the characters is on an Alpha account. It is possible to use two characters at once if both characters are on separate Omega accounts.

A second restriction is that normally a player can only train one character per account at any one time. So to train one character a player will need to pause training on all the other characters on that account. This means that players often have to carefully plan training on their Alts, to avoid taking too much training time away from their other characters. An exception to this restriction is if the player pays for Multiple Character Training, as below.

If a player has an Omega account, they can opt to purchase 'Multiple Character Training' for their account, which enables them to train an additional character on the account at the same time for a limited period. Players can purchase up to two 'Additional Training Queues' per account, so they could potentially train all three characters on an account simultaneously. Players can purchase this from CCP's Multiple Character Training page.

Each Additional Skill Queue allows the players to train an additional character simultaneously for 30 days. This is 30 days in real time, not 30 days worth of skills. So if a player purchases an Additional Skill Queue and then does not use it to train any skills, the timer will still count down. When the 30 day limit expires, the character with the lowest overall skillpoints will have its training paused automatically. Multiple Character Training can only be done on Omega accounts. If the player's subscription expires and their account reverts to Alpha status, the Multiple Character Training will be paused and will resume when the subscription is renewed.

Note that in many cases, it is more expensive to use Multiple Character Training than it is to create a separate Omega account with a single character. Players looking to create multiple Omega characters should carefully calculate their payment options. 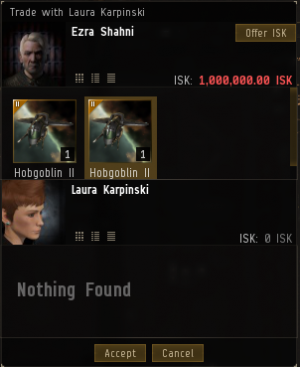 People and Places, click the three bars to the top left of their portrait and go to "Give Money":

The other character does not need to be logged in to receive ISK; it will go straight into their wallet.

There are three options for transferring ships or items between characters.

If the characters both have access to the same Upwell structure where the items are held, then a character docked in that station can right-click on the item in inventory, and select "Deliver to." The items will be instantly transferred to the other character's Deliveries Hanger. The other character does not need to be logged in.

If both characters are on separate Omega accounts and also in the same station in game they can use the station's Trade facility. Both characters will need to be logged in at the same time. To use this, right click on the name of the other character in the list of Guests under Station Services, then select Trade:

This opens up a trade window on the screen of each character (see image to the right), and each can drag items into the window to add them to the list of items to be passed over to the other character. Once both characters have clicked the Accept button the items will be transferred. ISK can also be transferred by this method.