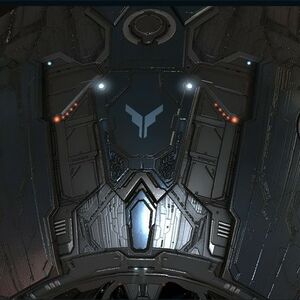 EoM logo on the Avatar SKIN.

The Equilibrium of Mankind (typically referred to as EoM) is an Amarrian terrorist death-cult that players can face in various agent missions in EVE. Unlike "true" minor factions such as the Angel Cartel, Thukker Tribe, and Mordu's Legion, the EoM are a special type of minor faction like The Seven and Mercenaries that do not have faction equipment, agents, sovereignty, standings, or even a presence in the Neocom's corp list. While Amarrian in origin, the Equilibrium of Mankind are found as enemies of all other factions, including the four major empires and various criminal organizations.

Equilibrium of Mankind in PvE

The EoM have been given an extensive background, despite their status as one of the smaller NPC Factions in EVE. The text below is the description of the faction given when the player is given the storyline mission "A Case of Kidnapping":

Equilibrium of Mankind is a notorious, outlawed terrorist organization who believe the human race made a grave error by venturing through the Pathway into their current homeland. Formerly part of the mainstream Amarrian religious cult, "Followers of God", EoM were eventually exiled from their headquarters on Ardishapur Prime. Their founder, Ocilan Ardishapur, was actually part of the Ardishapur royal family over 5000(sic) years ago, and had close blood-relations to the Amarrian emperor of his time.

Ocilan grew up as any highborn child would, leading a very comfortable lifestyle, set to heir his father's stake in the vast Ardishapur Family wealth. But soon he became disillusioned by his protected and privileged life. He withdrew from the daily routines required by his status, and refused to take part in the ceremonies and gatherings his father wanted him to attend. This turn of events is believed to be linked to the formation of a new division in the respected religious cult, Followers of God.

This new division called themselves "The Equilibrium of Mankind". Ocilan became the self-appointed leader of this new division which had very different views than most within FoG (Followers of God), which is simply a law-abiding monotheistic sect that follows the writing of Aramon Khalid, who lived during the beginning of Eves history (or so they claim). Little is known of the life of Aramon, but a few fragments of his writings still remain intact within a museum in the great library in Ardishapur Prime. His teachings are officially approved by the main religious body of the Amarr and the Emperor.

However, other fragments remain from this period. Scorned by the religious leaders of the Amarr, they were long forgotten and almost vanished forever, if it weren't for the dedication of certain Amarrian historians who kept them intact and safe. These writings had a completely different message than the ones revered by the Followers of God. They were written in an almost chaotic manner, as if transcribed by a man beset by a mental illness. They tell of destruction and doom and the downfall of mankind as we know it, should the human race decide to remain within this new universe which had been forbidden to them by God himself. It warns all who read it that those who do not follow the path of the righteous will burn in the fiery depths of hell. Those who follow "the path of the righteous" in this case are those who aid in the reconstruction of the "pathway to heaven", a myth long forgotten or discounted by most scholars within the Eve universe. This path would lead to the salvation of mankind, and failure to ultimate doom. Those who choose to follow the path must commit every ounce of their energy to see their pledged fulfilled or risk eternal damnation.

So profound an affect did this scripture have on Ocilan that it changed him completely. His family and friends claimed he began to act like a man possessed, and he quickly withdrew from their affairs. It was during this time period that he also met another man, Paragyn Koreithis, a monk belonging to the sect Followers of God who had dedicated himself to these historical fragments. It is widely believed that it was Paragyn who originally introduced Ocilan to this new religion. And together they formed the Equilibrium of Mankind.

With Ocilan's wealth and inherit charisma, and Paragyn's wit, they drew countless new members into their offspring religion. Although officially they still adhered to FoG, they secretly turned their backs on Aramon's teachings, much to the dismay of the elders within the Followers of God. But the High Priest within the cult, Ramos Ardien, turned a blind eye towards the unfortunate situation within his own establishment. After all this new division within its ranks had created a flood of fresh blood entering the Church, and more followers meant more revenue and power which was much needed in the brittle political landscape of this period. But this was not to last. Eventually Ocilan grew tired of trying to hide his true beliefs from the general public and decided to go against the will of the High Priest, who he felt was using him to suit his own agenda. At this time Ocilan had also become so obsessed with the religion that he simply dared not lay low any longer, as it could compromise his place within Heaven. And so he held a speech, broadcasted to millions of Amarrian citizens, and directly in front of the High Priest and other elders within the Followers of God. Those who witnessed this historic event would recount the almost maniacal fervor which engulfed Ocilan during his speech, and how he seemed to wrench at ones very soul with a grip as tight as steel. So overwhelmingly profound was his presence that one would almost think that a being of divine power was standing before the crowd, instead of simply a man dressed in ornamental robes.

But as his deep voice reverberated through the long empty halls of the church, filled with sacrilege and insult to the Amarrian religious beliefs, the high priest had had enough. Raising his hands in anger, the furious Ramos ordered and end to this disgraceful speech and the arrest of Ocilan for blasphemy.

But it was too late. Already almost a fifth of the Followers of God had joined Ocilan's cult, and there was no turning back. Clashes could be heard within the sacred walls of the church, but none of the High Priests guards could prevent Ocilan from storming across the hall towards the exit and leaving the building for the last time, a free man, closely followed by a flock of his worshippers.

News of these events spread like wildfire throughout the Amarrian empire, quickly reaching the ear of the emperor himself, Armani Kador. Outraged, and terrified, at Ocilan's lack of respect for the ancient Amarrian religion and leadership, he immediately ordered his execution. Karon Ardishapur, head of the Ardishapur family, quickly complied with his Emperor's orders and sent a fleet of ships to fly directly to Ocilan's refuge not far from Ardishapur Prime. The battle did not last long, and the outpost was completely obliterated, resulting in the deaths of thousands of civilians. But no trace of Ocilan was found.

For a few years no news of Ocilan was heard, and although the public was still ripe with speculation, the general consensus was that he had perished along with most of his dedicated followers when their outpost was destroyed by the Ardishapur fleet.

The legacy of Ocilan still lived even when few thought him still alive, and the remnants of his cult secretly began to gather more followers into their ranks, led by Menuir, one of Ocilan's closest advisors. But as their numbers grew, so did the emperor's awareness of their presence, and eventually he proclaimed them officially banished from the empire, and a death warrant to whomever bears allegiance to this outlawed cult within the imperial borders.

Exiled from the Amarr empire, the Equilibrium of Mankind had a difficult time surviving extinction. Only its core followers remained, which barely numbered in the thousands, even after the brief revival after the destruction of their headquarters. So the ragtag band of zealots made their way to a pirate infested system far away from the reach of the emperor. It was there that they made their colony, but their fate still seemed grim, faced with the hardships of living in such a hostile environment.

However the light of EoM did not fade. Three years after the foundation of this new colony, called Ocillia (in honor of their founder), Ocilan reportedly appeared for the first time since his alleged assassination. Within days word of this reached the empire, and many of those that had turned their backs on the disgraced religion were again interested. But along with these tidings came news of something more alarming. Ocilan, apparently at the verge of insanity which some scholars blame on the death of Paragyn, his mentor, had decreed that all human beings not following the righteous cause of the Equilibrium should be put to death. He predicted that a revolution would eventually follow, and the empire would be overthrown, as God would surely not allow mortals to remain in these sacred lands forever.

A spree of high profile terrorist acts and marks of public dissent followed which shook the very foundations of the empire, including the slaying of Karon Ardishapur himself. The Emperor withdrew himself entirely to his palace on the capital planet. For many years this state of discontent continued within the empire. A minority supported Ocilan, but even more were angry at the Emperors lack of response to the terrorist acts which had claimed over a million lives over a mere decade, threatening rebellion. But eventually the political spectrum changed, sparked by the untimely death of the depressed Emperor, Armani, and rise of his nephew Queron to the throne, who was much more widely supported within the population of the empire than his predecessor. Most of EoM's followers within the empire were quashed with Queron's iron fist, and although occasional terrorist acts followed, nothing of the same magnitude as before.

The organization still lives, despite numerous attempts by the Imperial authorities through the eons to put and end to it. And some even claim Ocilan still lives, somehow evading death itself. But after lying semi-dormant for thousands of years, few even know what EoM stands for.

However for the last few years it seems that this organization has been making a comeback. Terrorist acts have been committed throughout the galaxy, and not only in the Amarrian territories. Minmatar, Caldari and Gallente authorities have also reported groups of "pirate" marauders, claiming allegiance to a fanatical organization going by the initials of EoM, have been destroying convoys, poisoning food supplies and even bombing stations. Even the formal pirate factions, such as Angel Cartel, Serpentis etc, have claimed to have been targeted by these terrorists. The threat of this organization is growing, and so is our awareness of their presence.