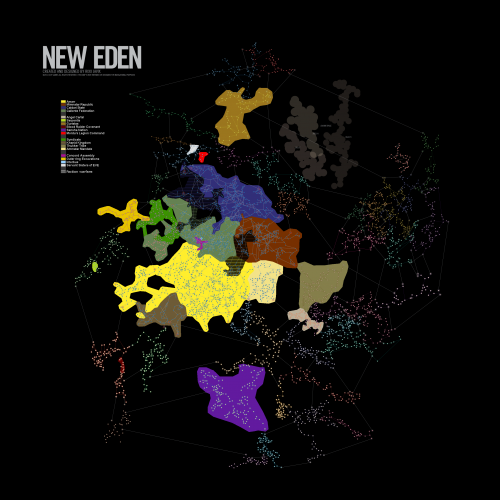 The Eve Online universe includes a series of five established governments. These include one government for each of the four dominant empires (Amarr, Caldari, Gallente, and Minmatar) as well as one for the fifth isolated empire (Jove). Each includes an established hierarchy, political system, and corporation membership.

Despite significant size and organization, some factions are not recognized by the five main governments as equals. These factions also differ in their sovereignty status: the Ammatar Mandate and the Khanid Kingdom are semi-autonomous client states of the Amarr Empire while the Thukker Tribe is an independent offshoot of the Minmatar Republic.

The Eve Online universe also includes a number of non-governmental or pseudo-political entities. Included among these are officially recognized entities designed to handle operations between various government factions (The InterBus) as well as on the behalf of all government factions (CONCORD Assembly).

Some large organized factions operate with little to no sovereign space. These groups usually operate both inside and outside of the five empires. Most are born out of corporations and their institutions.

Some factions are organized to perpetuate illegal practices outside the control of the five governments. Among these activities are piracy and drug manufacturing (Guristas Pirates and Serpentis) as well as banned religious and social practices (The Blood Raider Covenant). Sansha's Nation is a rogue state which none of the Empires recognize as legitimate and was destroyed in the past by an ad-hoc coalition of all four with the assistance of the Jove.

A tiny handful of civilizations survived the collapse of the EVE Gate, with the Jove being the sole example of such "precursor" civilizations that remained in New Eden. Recent events have seen the emergence of other organizations that can claim the title, such as the Drifters and the Triglavian Collective.

Some factions have little to no presence in the Eve Online universe; lost civilizations which only exist in the form of historical artifacts or long-silent creations.