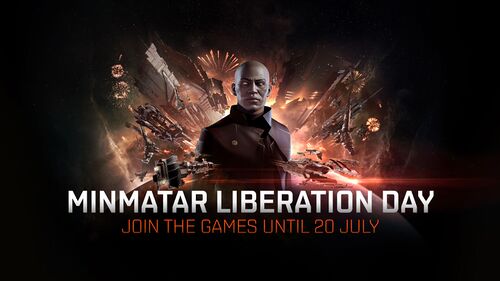 Minmatar Liberation Day is a limited time event running from 8th to 20th July 2021, downtime to downtime. During this period, capsuleers can log in to earn fireworks, SKINs and Boosters. This event features celebrations in select systems of Minmatar Republic high security space. 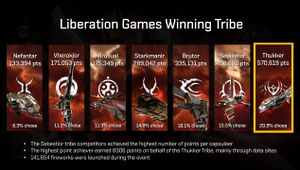 Final Result of the Liberation Games 2021

During the event capsuleers can choose their allegiance with one of the seven tribes using The Agency in-game. Fulfilling either Minmatar History Sites or following the Tribal Trail Monuments grants agency points for Agency Campaign Rewards and supports the chosen Tribe.

One of the following tribes can be chosen:

There are two slightly different combat sites, which reenact events from the Great Rebellion and can be found in Minmatar Republic space. During completion, the reenacted story is told with messages in local. Both sites allow T1/T2/navy faction frigates, T1 destroyers, T1/navy faction cruisers. A tank of 250 HP/s is recommended. The main damage types are EM/Therm. The Damage to deal is Exp. In Minmatar Republic Low-Security systems these sites spawn with the prefix Elite and are harder, but give higher rewards.

Small Deadspace Complex with an empty first pocket. All waves spawn in the last pocket.

This site has been constructed by the Minmatar Republic as part of the Liberation Games festivities. It uses training drones and holoprojectors to create a reenactment of a key battle of the Minmatar Rebellion: the Battle of Auner in BYC19 in which a hidden Minmatar base was discovered and attacked by Imperial forces. The heroic defenders succeeded in holding off the Imperial Navy long enough for the rebels to wipe the base computers and evacuate, preventing the discovery of important upcoming raid targets and the capture of several high-ranking rebel leaders.

When a detachment of frigates from the legendary "Vherakh's Raiders" responded to a coded distress signal near Auner VIII in early BYC19 they arrived to find this hidden rebel base besieged by an overwhelming force of frigates and cruisers from the elite Amarr 7th Fleet. Their goal became immediately clear: hold off the Imperial reinforcements long enough for the staff inside the base to remove any valuable intelligence and evacuate towards the relative safety of the Barvigrard constellation.

As the evacuation transports signaled that they were almost ready to undock, the hulking form of an Imperial Navy Prophecy exited warp within weapons range of the outpost. The only way to clear a safe window for the evacuation ships would be for the raiders to somehow destroy this powerful warship.

As the Prophecy began to explode, the evacuation transports took the opportunity to undock and warp to safety before the Imperial Forces regrouped. Had the raiders not been successful in holding off the Imperial Navy, the capture of this Auner base might have provided the Amarr 7th fleet with advance intelligence about several planned raids as well as the capture of several important leaders of the Rebellion including Clan Chiefs Idrald Rutuver and Jongar Evingod. This battle cemented the reputation of Vherakh's Raiders as one of the truly elite units of the Great Rebellion and is considered by many historians to be a key inflection point in the conflict.

Deadspace Complex with 3 Pockets. Destroying the present wave unlocks the Acceleration gate to the next pocket.

The warp-in is ungated and any ship can pass. Venturing deeper into the Deadspace Complex is only possible with the appropriate ship classes.

This site has been constructed by the Minmatar Republic as part of the Liberation Games festivities. It uses training drones and holoprojectors to create a reenactment of a key battle of the Minmatar Rebellion: the Mahti Jailbreak of BYC18 which freed many rebels who would go on to be key figures in the fight for freedom.

The Mahti Jailbreak was one of the most daring operations of the Great Rebellion. In BYC18 the maximum security Imperial detention facility in Mahti held numerous Minmatar prisoners who had been arrested for leading local slave rebellions on worlds across the Derelik region. In order to free these rebel leaders, a plan was hatched that involved a small group of elite Valklear warriors intentionally allowing themselves to be captured and brought to Mahti. These warriors then began a coordinated prison riot at a pre-arranged time just as a detachment of stealthy Thukker Tribe attack ships slipped across Imperial battle lines from Great Wildlands and started fighting their way into the prison complex.

As the Thukker forces entered the maximum security pocket of the prison complex, the Valklears inside the prison stations took advantage of the distraction to seize control of several levels and begin freeing many of their compatriots.

Although the chaos inside the prison slowed the scrambling of defensive ships, the Imperial forces were able to undock their deadly Prophecy-class warship to face the attacking Thukker vessels.

As the Thukker strike team cleared the field of Imperial forces, the escaping prisoners undocked with hijacked Amarr transport ships and took the opportunity to warp to safety before Imperial reinforcements could arrive. The Mahti jailbreak is widely cited as one of the most notable operations of the Great Rebellion, as numerous freed prisoners went on to serve with distinction in the late rebellion and the early Republic era. The list of rebels freed in this raid includes early parliamentary leaders Okell Waturger and Anniber Darine, as well as future Admiral Stelrakur Allsvert (grandfather of the modern head of the Republic Security Services).

These sites mimic the behavior of the new Ressource War sites from the Stargate Trailblazers event. Republic Mining Expeditions can be found in and around the following constellations: Ani, Odengsolf, Almur and 730-KH

This site - a Level III Data site - must be scanned down like any other signature and is called Liberation Games Data Complex. It contains three cans with a hacking difficulty of green, yellow and red, respectively, along with three Firework Launchers. The sites can be found in Minmatar Republic systems. Unlike ordinary data sites, cans will not self-destruct after two failed attempts and will instead allow multiple attempts until success is achieved.

Users can log in for seven of twelve days within the event to collect all the rewards.

During the event, capsuleers can fulfill various challenges to gain event points, which unlock several rewards and count towards the chosen tribe.

During the event, special event beacons with a Minmatar fleet (composed of static structures of various Minmatar ships) are spawned. They are named after the titan of the fleet, and appeared as a beacon in space as "RFS <titan name> Liberation Parade".

The systems where parades take place (alongside the titan name and in-system location) are:

Every day, all pilots get a task to shoot fireworks at a predetermined titan among the listed locations. Pilots receive 5k SP directly for their efforts.

Each titan has a description that provides background on their namesake.[1]

One of the event's challenges leads you to the Tribal Trial which consists of different monuments regarding the Minmatar Liberation. Every visited location contributes points to the chosen tribe and the Agency Campaign Rewards.

Build by the government shortly after the formation of the Minmatar Republic, the massive sculpture called "The Eternal Flame" is meant to symbolize the everlasting passion and resilient spirit of the Minmatar people. In particular, it has come to stand for the determination of the Minmatar to remain free and liberate all of their people from slavery.

The Scythe-class cruiser remains the oldest Minmatar ship still in use. It has seen many battles and is an integrated element of many Minmatar tales and the material heritage of the tribes. A significant number of Scythes found their way into the hands of the Minmatar resistance. Upgunned and armored by rebel crews, the Scythewas an important combat ship at the outbreak of the Great Rebellion BYC20.

A few weeks after the start of the rebellion in BYC20, the Minmatar met with the Amarr in a fierce battle. The Minmatar eventually withdrew, but not before dealing heavy casualties to the Amarr forces, Most importantly, the Amarr lost many capital ships and were left with considerably reduced offensive power in the frontlines of their attempt to defeat the Great Rebellion.

Shattered remnants of a formidable space fortress built by Lord Basad, the governer of the Ani constellation in early BYC19, during the time of the Great Rebellion, to hold off the rebel forces. This fortress stood for two months in orbit of Hjoramold XII and its ruins act as a reminder of both the cruelty of the Amarr and the spirit of the Minmatar.

The Battle of Fort Kavad in BYC17 was the final blow by Minmatar freedom fighters that prevented an Amarr counter-offensive and secured the territories of what would become the Minmatar Republic. Catching an assembling Amarr taskforce by surprise, the massed strike by Minmatar forces destroyed the core of the battleship fleets committed to reconquer the Minmatar. After Fort Kavad, the Amarr Emperor called a halt to such attempts and the Minmatar had won their freedom.

After his death in YC109, Captain Karishal Muritor has come to be seen within the Minmatar Republic as farsighted in his recognition of the reality that compromise with the Amarr Empire's expansionist ambitions is a trap the Minmatar cannot afford to fall into. His Actions may be seen as precipitate and rash by some but his cause is one the majority of Minmatar recognize as just.

In YC110, in order to free the survivors of the Starkmanir Tribe still held under Amarr rule, the Minmatar-Thukker Elder Fleet unleashed their forces on CONCORD, incapacitating their ability to deploy peacekeeping forces at speed. This stroke left Amarr space vulnerable and the Elder Fleet turned to launch an attack on the Empire that would free untold numbers of slaves.

Highest priority among the goals of the Minmatar-Thukker Elder fleet in YC110 was a massive assault against the Ammatar Mandate system of Jarizza. The survivors of the Starkmanir Tribe had been revealed as hidden on the planet Halturzhan (Jarizza VI) and the Elder Fleet destroyed a hastily-assembled Ammatar Fleet before moving to recover their kin. Many Nefantar defected alongside the Starkmanir they had hidden for so long.

With the return of the Nefantar and Starkmanir to the Minmatar fold, it only remained for the Thukker Tribe to rejoin for the Seven Tribes of Matar to be once more united. After negotiations that favored the Thukker in every respect, the nomads officially joined the Republic in YC111, with full autonomy in Great Wildlands. The Tribal Council of the Seven Chiefs and the Sanmatar was established to govern the new Tribal Republic of the Minmatar.

This filament allows a fleet containing a single capsuleer to enter an Abyssal Proving Ground for a fight to the death against three other capsuleers. The only ship allowed to enter this proving ground event is the Rifter.

Pilots equipped with modules or implants with a meta level higher than 5 will not be able to enter this proving ground. All ships within this proving ground will receive a bonus that doubles the benefits gained from overheating modules.