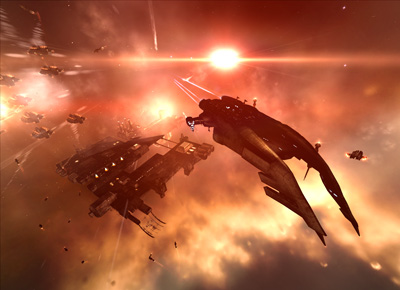 This article is about a game mechanic "Deadspace". See Abyssal Deadspace or DED complexes for the PvE content, DED for the NPC Corporation and Deadspace Faction Modules for the module category

Deadspace is an anomalous type of space usually encountered by players during missions or Cosmic Signatures. Deadspace has special mechanics that are present on the whole grid which distinguishes it from regular space.

A Pocket is a single Grid of Deadspace (other names being Room or Stage). In most scenarios, the player will encounter multiple deadspace pockets linked together by acceleration gates. These linked deadspace pockets form a so called Deadspace Complex.

The initial Warpin point provided by mission agents or successfully scanning a Cosmic Signature leads the player to the entrance of a deadspace complex. This entrance or Pocket 0 contains just a single acceleration gate but all further explained mechanics already apply to this grid. Once activated, the acceleration gate warps the player's ship to the next pocket of the complex. mission guides refer to these subsequent pockets as Pocket 1,2,... and so on, which again contain acceleration gates leading deeper into the complex (except the last pocket of the complex).

Warping inside a deadspace pocket

The warp drive can't be used inside a deadspace pocket. Neither warpable objects nor bookmarks can be used to warp around inside the pocket. When trying to initiate a warp the following message is displayed and also voiced by the ship's computer Aura:

You cannot warp there because natural phenomena are disrupting the ship.

Warping to a bookmark or object outside of the complex however is still possible.

Warping to a deadspace pocket

When warping to a bookmark, player, or beacon inside or on grid with the gate outside a deadspace complex, the ship will always be redirected to center of the outside pocket. This may be at 0km on the gate, or at 0km on a the beacon in some cases (for example, the Encounter Surveillance System gate is a few kilometers from the beacon).

The following are all examples of ways to end up at 0km outside a deadspace complex:

A deadspace complex spawns with all its pockets when a player initiates a warp command to the site at the latest. The complex despawns after the target conditions have been met and the last player has left the complex for at least 2 minutes. Reentering the complex within this time-frame resets the despawn timer. Cloaking inside a complex after completion and cloaked players in general do not prohibit the site from despawning.

With the complex all acceleration gates and other Structures despawn. The shipwrecks and cargo containers stay in space at their respective position and can be warped to freely. If the pilot wants to loot the complex after completion, bookmarks in all pockets are necessary.

There are a few restrictions regarding module usage. Cynosural Field Generators of any sort do not work inside deadspace. Mobile Structures that require anchoring like Mobile Warp Disruptors (Bubbles) can be launched, but not anchored.

When a ship inside a deadspace complex is scanned via combat probing, the resulting warpin is redirected to the gate in pocket 0.

Example topography of a deadspace complex. grid size and distance may vary. 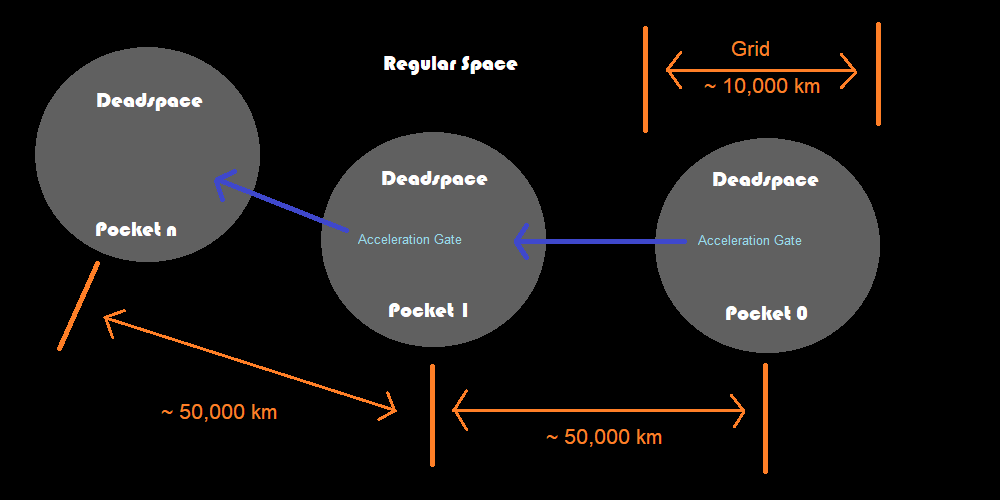 Deadspace is usually encountered by players in the following situations:

Some newer content has softened forms of deadspace in place, where the Warping inside a deadspace pocket mechanic does not apply. Known examples are:

There are reports [1] on at least one Level 5 missions, where scanned ships generate direct warpins inside a complex pocket.

During the early days of EVE, the usage of microwarpdrives was prohibited inside deadspace. Additionally player ships inside deadspace were much harder to scan, although this didn't apply to drones, so Ninja Salvagers and Mission Gankers took advantage of this.