Hacking is used to access Container structures in relic and data sites, chemical labs as well as mission given by Agents. 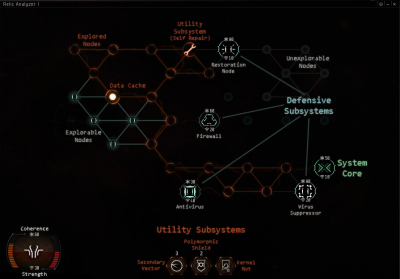 The hacking mini-game with systems indications.

The goal of hacking is to find and disable the Container’s System Core. You do this by maneuvering a Virus through the board of nodes that represents the Container’s electronics.

Clicking on a green node will reveal its contents: if the node is empty, it will turn orange and allow you to further explore adjacent nodes.

If the new node is empty it will briefly display a number between 1 and 5. The number is the distance to the nearest node with a System Core, Utility Subsystem or Data Cache.

The numbers 1-5 don't tell you how distant you are from the nearest Defensive Subsystem.

Instead of being empty a node may contain:

Finding and disabling the System Core is the goal of hacking.

System Cores, Defensive Subsystems and your Virus have:

When you click on the System Core or Defensive Subsystem your Virus will attack. Attacking is turn-based:

When you reduce the System's Coherence to 0, it is disabled and removed from the board.

You fail a hack when:

If you fail the hack:

Defensive Subsystems prevent you from exploring adjacent nodes until they are disabled.

Utility Subsystems assist you in disabling the System Core and Defensive Subsystems.

When you click the Utility Subsystem it will be added to a free utility slot.

Activate the Utility Subsystem by clicking on it in your utility belt. The number of utility belt slots depends on your Analyzer module.

Data Caches have a 50-50 probability of containing a Defensive or a Utility Subsystem.

Open a Data Cache by clicking on it. Open them only as a last resort.

Hacking can be done in any ship that has mid slots for Data and/or Relic Analyzers. However, exploration ships have a role bonus for both Virus and scan Strength.

Each Empire's Tech 1 Exploration Frigate has a role bonus of +5 Virus Strength to both Data and Relic Analyzers. These ships also get an 7.5% (37.5% max) increase to scan strength per racial frigate level, which helps in scanning down Cosmic Signatures.

Covert Operation ships are the direct upgrade from Tech 1 Exploration Frigates. They get a +10 bonus to Virus Strength, +10% (50% max) per level bonus to scanning, and can use Covert Ops Cloaking Device II.

Strategic cruisers can be fitted with the Covert Reconfiguration subsystem that gives them 10% per level scan bonus, +10 Virus Strength, and the ability to use Covert Ops Cloaking Device II. Strategic cruisers are very expensive ships.

Data Analyzer or Relic Analyzer allow you to hack Data and Relic Sites. There is no additional high, mid or low slot equipment to make hacking easier.

The slot 9 implants that improve Virus Coherence and Strength.