The Rogue Swarm Alert was a Rogue Drone-themed event that ran from June 13, 2017 and until June 27, 2017. The event consisted of combat sites that appeared as warpable beacons in the in-game overview. Finishing these sites awarded players with valuable loot such as PLEX, ship skins, drone componets and cerebral accelerators. 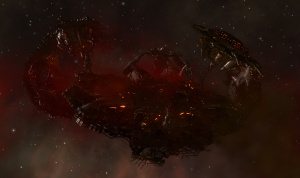 Sometime between the waves, a group of hostile faction drones will spawn. They deal negligible damage and killing them is not necessary for the commander wave to spawn.

The swarm overmind ship is guaranteed to drop one skin. The skins included this event are Justice, Kador, Wiyrkomi and Valimor Legacy. The overmind can also drop one Rogue Swarm Accelerator that gives +10 to all attributes for 24 hours. The duration can be extended with Biology to up to 48 hours. Additionally it is possible to gain BPC for drone faction drones, drone materials, drone alloys and PLEX.