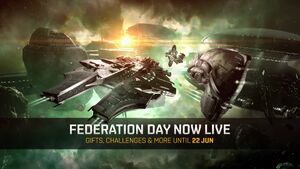 Users could log in for three of four days within the event to collect all the rewards. 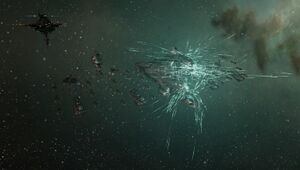 The parade fleet in Villore, with fireworks exploding near the titan.

During the event, special event beacons with a Gallente fleet (composed of static structures of various gallente ships) were spawned. They are named after the titan of the fleet, and appeared as a beacon in space as "FNS <titan name> Parade".

The systems where parades took place (alongside the titan/beacon name and in-system location) were:

On 20 June, Capsuleers were given a task to shoot fireworks at a titan in a select system for 5,000 skill points. The task was listed as "Federation Day Parade - <system>", with specific completion info only on hover-over. However, the task did not function correctly, and no immediate rewards were given for launching fireworks at the titan. CCP Fozzie and EVE Status posted on Twitter that day that the SP would be rewarded retroactively next week, and that they had records of everyone who shot fireworks at the titan.[1][2] On 22 June, characters that completed the task had the skill points added to their "Redeem Items" window.[3]