New Eden is divided by System Security into: high security, low security, null security, and wormhole space. High and low security space are also referred to as "empire space", because every system is claimed by either Amarr, Caldari, Gallente or Minmatar.

Null security (or nullsec) space is not claimed by the empires, and can be split into:

Infrastructure Hubs or I-Hubs are used to upgrade the system, allowing it to spawn more Combat Anomalies, Ore Sites, or Signatures, or allowing the owner to set up more advanced flex structures such as Jump Bridges or system-wide Cynosural Field Jammers. Maintaining an I-Hub costs an upkeep bill which is charged to the alliance wallet.

If a system does not currently have an I-Hub, or TCU a player may place one. Deploying an I-Hub or TCU involves buying or making one, and then launching it in to space (right-click and "launch" or dragging the structure to space). Once this is done the structure is in a neutral state and owned by the SCC. To gain ownership of the structure, a player must activate an entosis link on the structure to capture it. Other alliances are free to attempt to capture the structure while it is in this state.

Command nodes are objects that appear in space. They are shown on the overview and it is possible to warp to them directly. These nodes can spawn in any system within the constellation, regardless of the owner of that system. Their name in the overview identifies the system they are connected to as well as the structure in that system. They also have a unique ID to help identify which node in a system players are referring to. For example, a command node for the TCU in O1Y-ED may spawn in X36Y-G with the name "O1Y-ED Territorial Claim Unit Command Node NK17".

Structures that have been attacked but not reinforced and command nodes all have defensive regeneration. This means that if the structure is left uncontested, eventually the defending side will win. The maximum regeneration times are as follows: 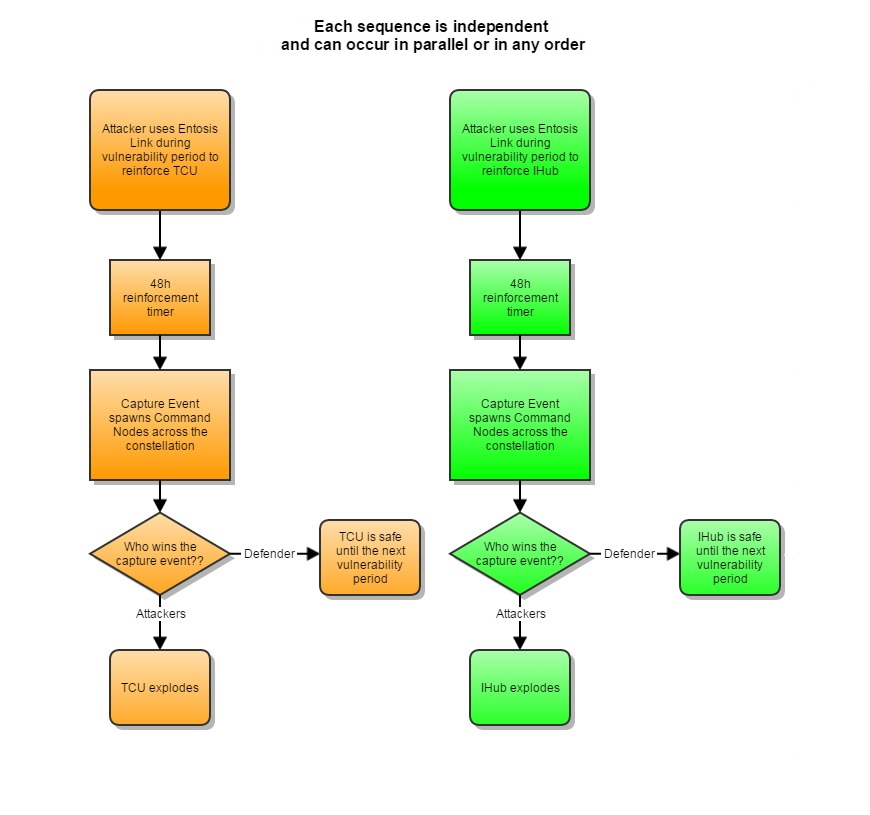 The length of time it takes to reinforce a structure or capture a command node depends on the Activity Defense Multiplier (ADM) for the system. This rewards an alliance for holding and being active in the system, making it easier for them to defend.