The Entosis Link module is the core catalyst of the Aegis Sovereignty system (commonly known as Fozziesov among EVE players in honor of CCP Fozzie, one of the lead developers of the system). It is used to destroy and defend Territorial Claim Units, Infrastructure Hubs, Stations and Station Services.

The Entosis Link replaces the "structure grinding" from Dominion Sovereignty, where players had to use weapons to attack structures and use remote repair modules to restore them before they were destroyed. CCP decided that this put too much importance on capital ships, fleet sizes, and indirect conflict via the structures themselves, and decided to shift the focus to direct ship vs. ship combat and pilot skill over numbers. For more details on how capturing a structure works, you can check out the links to the right of this paragraph or read this flow chart: 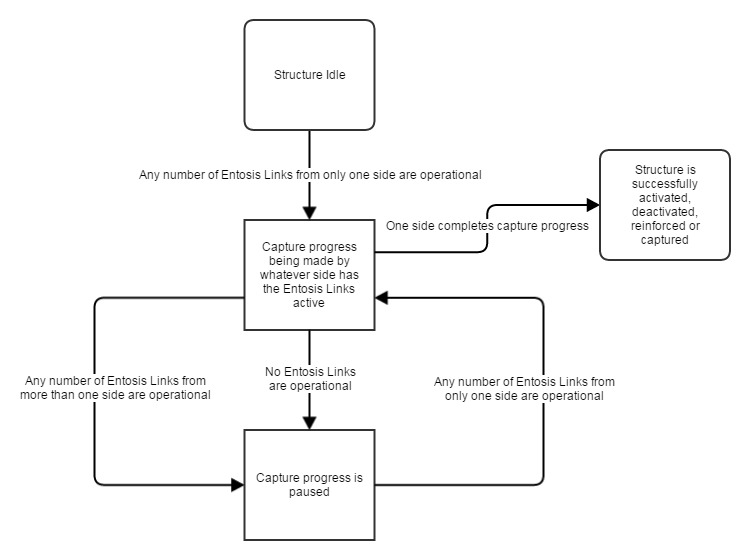 General Details of the Module

An Entosis link is a high-slot module, with a limit of one per ship. It is used by locking a target structure and activating the module. If the structure has a vulnerability window, such as Stations, Infrastructure Hubs (I-Hubs) and Territorial Claim Units (TCUs), the Entosis link will have no effect outside of this window. Each cycle of the entosis link consumes 1 Strontium Clathrate as fuel.

While the module is active, your ship is unable to cloak, warp, dock, jump or receive remote assistance (such as repairs or capacitor). There is no way to stop this effect early except for losing the ship. Capital ships have a role penalty that increases the module cycle time by 5x, forcing them to stay at capture points for longer. Your ship is also unable to exceed 4,000 m/s when online. This is to prevent players using entosis links from endlessly kiting opposing forces. Interceptors are unable to activate the module.

After the warmup cycle, the structure can start to be captured. The time this takes is dependent on the base capture timer of the structure and the Activity Defense Multiplier of the system. The cycle time of the entosis link itself has no impact other than the amount of time spent tethered to the structure while the module is active.

Structures only recognise the Entosis links of their owning alliance as "friendly". All other links (including allies) are considered "hostile" and will negate the links of the owners. If there is no owner of a structure (such as when anchoring an I-Hub/TCU, or a station is in freeport mode) each alliance is its own "side". IF two or more sides have any number of Entosis links active on a single structure, the capture timer will be paused. This is the case even if one side has more links active than the others.

A side activating more than one Entosis link on a structure does not change the time taken to capture the structure.

Both the cycle time of the Entosis link and the capture timer of the structure are affected by Time Dilation.