During large fleet engagements involving hundreds or thousands of players, lag usually occurs. The reason is that so many players are sending actions to the server of a system that the server can't handle all those action in a timely manner.[1]

Imagine a bunch of houses with roads connecting to a building in downtown. Each house would be a person in EVE and the building in downtown would be the server. Now let's imagine that a car from a house is an action, like turning on your missile launcher. Normally, if just a few people drive their cars on the road, traffic goes smoothly. But if you have a huge number, then you get a traffic jam.

The actions being received/sent do not arrive in a regular pattern. Imagine lots of cars one minute and the next just a few. Thus there would be times of fast traffic and slow crawls (lag spikes); and in extreme cases of slow crawls, some cars might not make it to the building on time (causing their actions to just not happen).

To combat these effects and to make large battles more fair and playable, CCP created Time Dilation. TiDi slows down almost all in-space actions. This is kind of like setting a speed limit on the road so that all the cars go at a steady, smooth pace.

TiDi affects a node, the hardware hosting a specific region in EVE space. When lots of players start to overload a node, TiDi takes place. This not only keeps a smoother pace, but helps prevent players from lagging out (where their client disconnects).

When TiDi occurs, everything happens in slow motion or "bullet time". Note that TiDi has no effect on EVE Server Time, or on things that depend on it like Industry, Skill Training, or, critically, Upwell structures repair timers; players in a time-dilated area will see the same time as everyone else in EVE, even though their actions are implemented more slowly. 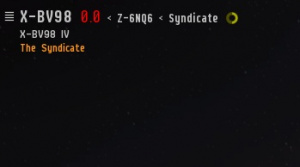 What time dilation icon looks like. Note the yellow circle

When a node has a certain amount of load (due to player activity) all systems on that node will show an icon representing the current Time Dilation. You can see the icon on the screenshot, in which the icon has a yellow colour. Hovering the mouse over that icon will display the current time dilation percent (the speed at which time is currently moving).

The rule of the thumb is:

The maximum time dilation speed is 10%, making one second in game become ten seconds in real time. Reaching this level of reduction usually requires thousands of pilots in space in the same system. Confusingly, this state is sometimes referred to as "90% TiDi", referring to the 90% reduction in the speed of time.