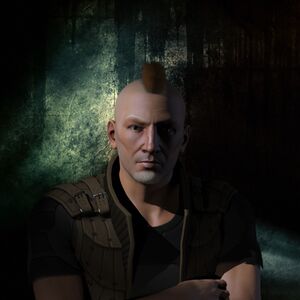 He can be found online most every day, at varying times throughout the day.

Hannibal first started playing EVE in the end of February of 2011, and joined EVE University for the first time March 8 of the same year. After nearly 3 months with E-Uni, real life caused a 6 month departure from the game. After returning to EVE in November of the same year, Hannibal returned to E-Uni. Shortly after his return, Hannibal applied for his first staff position. Since then, he has made it a goal to be a prominent and constant contributor to EVE University, both as staff and in other capacities.

Out of game, Hannibal is a 22 years old, married and soon to be a new father. He is from the United States and currently lives near Chicago. Hannibal currently works for the United States Postal Service, and contrary to popular belief likes to have fun sometimes. Some of his hobbies include PC gaming, storm chasing, rally car racing, and just generall tomfoolery. He has plans to go back to school and finish his degree in Network Engineering.

Hannibal has been playing games for as long as he can remember. RPGs have always been one of his favorites, include the Final Fantasy and Elderscrolls franchises. He also really enjoys strategy games, including Age of Empires and Command and Conquer. Hannibal's current game interests are EVE, Guild Wars 2, and Civilization 5.

Official Duties in the E-UNI

Hannibal is a former Senior Personnel officer with the Uni, resigning his title with his promotion to Records Manager. He is still capable of performing SPO-level interviews however. While he took the position very seriously, Hannibal was also a very light heart in the Personnel department. He really enjoyed training new personnel officers, and does all he can to make them feel welcome and ease their transition into their new position.

Hannibal also spends a lot of time in the E-Uni public channel, keeping the peace and chatting with the natives. He is well loved by all.

Hannibal often says that joining the Personnel Department was the best decision he could have made during his time in E-UNI, and his promotion to Senior Personnel Officer secured that decision for him.

Hannibal started in this department one of three newly created Student Relations Assistant positions. He served as assistant to Marius Labo, the University's Student Relations Manager, in dealing with issues and concerns that students may have. Hannibal was excited at the opportunity to serve in this position. He loves interacting with people and helping them out when they need it.

One thing Hannibal had taken to heart with his new Student Relations position is to aide in changing the University's view of the department. Most students with E-Uni know Marius as the one who talks to you when you broke the rules, and the one who deals the punishments. Hannibal wanted to the entire University to know that the Student Relations is much more than that, we are here to help protect the student body from themselves, each other, and to a degree Management. This goal has recently come to fruition, with the Records Department being renamed and refocused to the Guidance Department, and taking on new staff. The focus of the entire department and the staff is to educate those struggling members in order to help them resolve issues before they go on to be punished.

If you wish to contact Hannibal with any issues, feel free to find him on mumble, send a mail or convo in game, or even a forum PM. Sadly of late, communications via homing raccoon have become unreliable.

Hannibal served as a Mentor with the education depratment for a time with the Uni. It was one of the most rewarding experiences he's ever had in E-Uni, however real life commitments limit his play time. Hannibal felt that he could not give the time his mentees deserved, so he made the decision to step down from the department.

Hannibal encourages everyone who is interested in helping new members to check out the Mentor department.

Hannibal first started doing incursions in a lowly Brutix, and was almost turned off to them by his first experience. His Brutix was lost on the very first incursion site he ever did. Fortunately, he lost it to a glitch and it was reimbursed by a GM.

Despite this loss, Hannibal kept at it and quickly fell in love with incrusins, becoming a prominent member of the Uni incursion community. He quickly left the Brutix behind, and became one of the first pilots in the Uni to pilot a Rokh for shield fleets.

Hannibal made efforts to get on Uni Assault fleets whenever possible, eventually become an assault site FC. He was also present for the University's first HQ fleet.

Hannibal remains a known member of the Uni incursions community, and always welcomes questions about incurusions.

Hannibal has a strong interest in PvP as well as incursions, and he frequents the LSC. While he does not spend all of his time out there, he does enjoy spending time with the people in the LSC. Explosions are always, of course, welcome.

While he does not do it often, some have reported spotting Hannibal doing a mission. While this can neither be confirmed or denied, it is said he is knowledgeable regarding missions and mission fits. He welcomes questions about missions, so feel free to contact him.