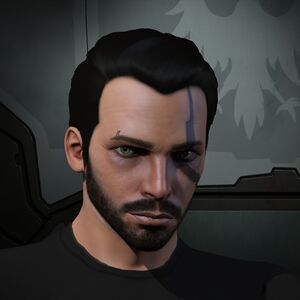 He is mostly online in the evenings (EVE time) as his timezone is GMT+1 (DTS applies every year, so in summer he is GMT+2).

Out of game, Joha is a 23 years old IT student whose dream is to become a game designer. He is from Slovakia and lives in it's metropole Bratislava. He loves chocolate muffins, snowboarding, women and PC Gaming. He is trying to start a blog, but he is genuinely too lazy to start writing properly. Joha is also a part-time game reviewer and critic. He is also looking for people who would be willing enough to start up a YouTube channel, focused on reviewing games and criticism.

Joha has been playing games since 1999. Many games have passed through his PC but hits such as Quake, Doom, Deus Ex are his favourite. From today's games he absolutely loves EVE, The Witcher games, is a big fan of The Elder Scrolls franchise (although the MMO version holds a big disgust in him) and Assassin's Creed franchise. He has also been a hardcore raider in World of Warcraft, however he left the game because of what has become of it.

Joha is the former Personnel Manager ( with his former assistants Sketchy McGillis, Rose Chanlin and Laura Karpinski). While he is usually open, friendly, helpful and all out for ocassional trolling and laughs he takes his role very seriously as well as he understands the work that needs to be done in the department.

He will also vigorously defend any Personnel Officer [4], be it ordinary PO, SPO or someone from management should you have any inappropriate comments.

He can also be seen in public E-UNI channel, either casually chatting or calling for applicants, so he can interview them. His calls cannot be missed as he is using (and is known for it) a famous "Angry Interview Bunneh".

He has also been one of the first Personnel Officers who started wearing the white officer uniform, making it mandatory for those in SPO position and who are cool.

If he would give advice on being accepted into the department he'd say: "Be honest, show me you are responsible, be cool, provide cookies... and then I may consider your application."

He often describes joining the Personnel Department was the best decision he could have made during his time in E-UNI.

Should you have any questions regarding recruiting of POs into the department, do not hesitate to contact him (or any of the other APMs) via the forum PM or EVEmail.

His own business (priority in descending order)

Joha is one of the first members of the youngest campus of all... and now a permament resident (along with almost every PO) of our most beloved Wormhole. His business there usually consists of doing PI, Mining but most of all: Sleeper Sites (which proved to channel some nice ISK to his wallet).

He can be mostly seen running the sleeper sites in his super awesome armour-tanked Talos, Purger Drake or an armour-tanked Cane. He is even leading the fleets sometimes but mostly can be seen taking part and giving advice to people Fleet Commanding for the first time.

As for people interested in leading C3 running fleets, he really recommends one of the following sites:

Starting out as a newbie in poorly fitted Brutix, Joha has moved up and have been ocassionaly leading incursion fleets in his shield-tanked Legion. Joha has considered incursions to be a main source of his income. However he is rarely seen doing incursions nowadays as he is living in a wormhole.

His fleets are mostly laid back and full of laughs, if done with correct people. He consideres Cassiel Seraphim [7] as his incursion buddy.

Used to be a part-time LSC member. You will not see him there nowadays, since he only takes part in official E-UNI fleets, but mainly because of his wormhole business, which proved to be challenging enough to be acceptable for his future.

Joha can be also seen running missions at various locations, due to the security issues, you can get more info by directly contacting him either via forum PM or EVEmail. You can even try to convo him if you feel lucky. He is flying a shield tanked Omen Navy Issue [8] and is more than open to an idea of running missions together with someone as he finds them quite dull if done solo.

Joha has also completed Sisters of EVE Epic Arc [9], so if you need any help, again, do not hesitate to contact him.