Focus Crystals (used by laser turrets), and Mining Crystals, used by mining lasers in EVE Online may receive "damage" and eventually be consumed (or in common terms, shatter). These crystals have a Hit Point value much like any other destructible object, and shattering occurs when enough damage is taken by the crystal to lower its hit points to zero. The life expectancy of a given crystal, i.e. the average amount of time it may be used before it shatters, may be calculated from its attributes.

As with most transportable objects in EVE Online, one may right-click a combat or mining crystal and choose Show Info. The information in which we are interested are within the Attributes tab of the Show Info window. 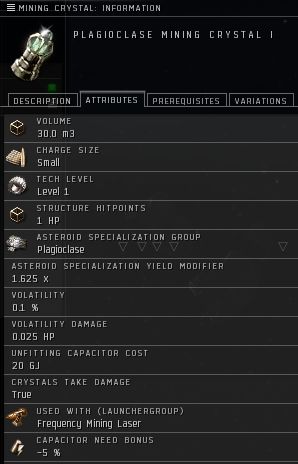 There are four different attributes that affect the life expectancy of a crystal. These attributes function identically for both combat and mining crystals.

This is the total Hit Points of the crystal. Currently, all crystals in the game have exactly 1 HP.

In terms of Volatility, an Activation Cycle is a single cycled use of a laser crystal by the turret within which it is loaded. With combat crystals, each time the energy weapon is fired is considered one cycle.

This is the actual amount of damage the crystal may receive during an activation cycle based upon its Volatility.

This attribute is always either True or False. If it is True, then the crystal actually takes damage based upon the other attributes above, and it will eventually shatter.

Currently, the only crystals in the game whose Crystals Take Damage value is False are the Tech-1 combat crystals. These will never take damage and thus they may be used indefinitely. Note that if the value of this attribute is False, then it will not even be listed in the Attributes tab of the Show Info window.

The formula for determining average life expectancy of a crystal is simple:

One may then multiply the expected cycles by the cycle time to calculate a crystal's life expectancy over time. Remember that Volatility is a percentage, so for example, a crystal with a Volatility of 10% must use the value 0.10 in the equation.

The Plagioclase Mining Crystal I has a Volatility of 10%, which means that for every cycle there is a 10% chance that it will receive damage. The amount of damage it receives will be the Volatility Damage value of 0.025 HP. It will shatter when its total damage reaches the Structure Hitpoints value of 1 HP.

This means that, on the average, the crystal has a life expectancy of 1 / 0.10 / 0.025 = 400 cycles. With a standard (unbonused) strip mining cycle time of 180 seconds, one may estimate that a crystal will endure approximately 72,000 seconds, or 20 hours, of constant mining before shattering.

The Plagioclase Mining Crystal II has a Volatility of 20%. It has the same 0.025 HP Volatility Damage, and 1 HP Structure Hitpoints as the tech I variant. As a result, the crystal has a life expectancy of 1 / 0.20 / 0.025 = 200 cycles. However, a ship using these crystals will likely not be operating unbonused; it will likely be flying with significant improvements to its mining cycle time. So, while an unbonused strip miner cycle takes 180 seconds and a tech II would last around 10 hours, strip miners fitted to a max-skilled Hulk, enhanced by a Mining Laser Optimization Charge from a Rorqual, can cycle in as little as 42 seconds, thus reducing the crystals lifespan to a mere 138 minutes. However, to compensate, if further enhanced by an Equipment Preservation charge, the crystals volatility can be reduced by up to 60%, resulting in a new life expectancy of 1 / 0.08 / 0.025 = 500 cycles, which at 42 seconds per cycle comes out to 21,000 seconds, or just short of 6 hours of constant mining before shattering.