This article details how damage is calculated when a missile explodes near a ship. For details about using missile launchers, as well as other missile stats, see Missiles. For information about damage as it is received by a target ship, see Tanking. 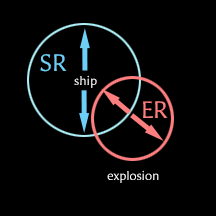 Of significant note, the Arcing Vorton Projectors used by EDENCOM Ships also use missile damage mechanics to determine their damage application. Most other properties of these weapons will not be discussed on this page.

Every missile has a Base Damage – which is listed as "explosive damage", "kinetic damage", or so on in the Attributes tab of the missile's Get Info window. 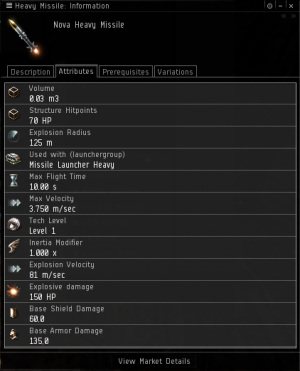 This amount may be augmented somewhat by certain skills and/or equipment, and when the term "Base Damage" is used here, it means the listed damage of the missile plus any augmented damage … in other words, the damage you expect the missile to do if it scores a direct hit.

In practice damage is usually reduced by the combination of these two factors.

In the simplest terms: big, slow ships can take up to 100% of missile damage. Small, fast ships often take less damage. It is NOT the speed of the missile that matters; but the speed and size of the explosion.

If you have been using missiles, this probably does not surprise you, and you may want more details, but since the actual damage number depends on target speed, missile speed, signature radius and so on, there is no way to give a simple summary or table of how much damage a particular kind of missile will do against a particular kind of ship.

Without going into the mathematical details (discussed below), the other factors that might come into play are these:

As an illustration, here are the basic statistics for the Inferno Light Missile. These are sorted on explosion velocity.

First, notice that the only difference between the regular Inferno and the Caldari Navy Inferno is a change in the base damage.

If that all makes sense, then good ... if not, then just keep in mind that, all things being equal, EVE has balanced the damage done by missiles among themselves as well as with the damage done by projectiles, beams and other types of weapons.

Skills and ship equipment can have a direct impact on missile damage. A number of implants do the same. In addition, modules such as Target Painters and Webifiers can affect the target's signature radius and speed, thus making missile damage more effective.

While various skills improve a player's expertise with missiles, these three specifically affect the amount of damage done when a missile explodes.

While there are additional items that affect missiles and launchers, those do not alter the missile damage as such. Here are the ones that do.

Ballistic Control System: Among other things, gives a bonus to base missile damage.

A variety of Hardwired Implants affect weapons systems. Only a few have a direct impact on missile damage creation.

Missile damage can be substantially increased by using Electronic Warfare Modules to change the Velocity and/or Signature Radius of the target ship.

The equation for missile damage is as follows:

Here are the terms in the equation. Except for the "damage reduction factor", these are the same as were defined in the Basic Picture section, above :

Unlike the turret damage formula, missile damage takes the absolute velocity of the target into account, not the angular velocity. To create missile damage, the game computes two values. These values are compared to 1, and the smallest is chosen. That number is then multiplied by the base damage to get the amount of damage applied to the ship.

Target signature radius [math]S[/math] is the effective size of a ship. It is affected by various factors, such as the ship type, modules, rigs, skills and/or implants. It cannot displayed in the Overview, but it is listed in the ship's Get Info Attributes.

The base damage of a missile [math]D[/math] can be found in the missile information under “EM damage”, “Kinetic damage”, “Thermal damage” or “Explosive damage”. Base Shield Damage and Base Armor Damage are not relevant for this calculation.

All three of these can be improved through the use of rigs and/or implants.

The “damage reduction factor”, or [math]\mathrm{drf}[/math], of a missile is not mentioned in the game, it is however included in the data that CCP publishes.

Analysis of the equation

The equation can be written in this format:

Since Ve and E are both attributes of the missile, Ve/E can be combined into a single "minimum velocity factor" for each missile class.

So, the target velocity at which the damage created begins to be reduced is equal to the signature radius of the target times the minimum velocity factor.

The equations also show that there is a minimum speed that a ship needs to fly before its velocity can reduce the missile damage at all. If the ship is moving below a specific threshold, the explosion velocity and the speed of the ship do not affect the missile damage. In that case, only the signature radius of the target and the explosion radius of the missile can have an effect, and further decreases in the ship's speed will not increase the damage. However, increases the signature radius can, until the damage reaches 100%.

As you see in the Formula (assuming the minimum is the third term), reducing the explosion radius by 20% means multiplying the explosion radius with 0.8 which is equivalent to multiplying the explosion velocity by 1/0.8=1.25. This shows that the first rigor (20% reduction to explosion radius) is flat out better than the flare (20% increase in explosion velocity). If you assume that the minimum is the second term then the rigor is better anyway and for the first term it doesn't matter. Now you have stacking penalties though, so does the flare become better at some point? For that purpose I calculated various combinations of rigs always as a multiplicator of the term inside the drf bracket. If you rise that multiplicator to the appropriate drf you get the damage multiplicator compared to no application modules (Assuming you stay in the third case).

Note that all examples assume all 0 skills. Higher acceleration control will result in propulsion mods being significantly more effective at mitigating damage.

Since the speed of the Drake (140 m/s) is below the required speed (191.16 m/s), the speed does not affect the missile damage. The damage is determined by 1, the lowest of the three factors and the missile does full damage.

The Heavy Missile has a MVF of 0.648. The Drake fits a 10MN meta afterburner, increasing top speed to 273m/s; signature size is unchanged.

The required speed stays the same. As the drake is now significantly faster than the required speed (273m/s vs 191.16m/s) some damage is lost (the missile does approximately 72.6% of maximum damage).

The Heavy Missile has a MVF of 0.648. The Drake fits a 50MN Quad LiF Restrained Microwarpdrive, increasing top speed to 675m/s and signature radius to 1622.5m.

Since the speed of the Drake with a MWD (675m/s) is below the required speed (1051.38 m/s), the speed does not affect the missile damage. The damage is determined by 1, the damage is 100% of the possible damage and it is no different than the damage the ship receives without the MWD.

The Heavy Missile has a MVF of 0.648 and explosion radius E of 140m. Griffin frigate has signature radius S of about 42m

Since signature radius of Griffin is smaller than missile's explosion radius, we are limited by the second term in the missile damage formula - S/E, which is 0.3. That means that at the best we are able to do only 30% of Heavy Missile's damage when firing at Griffin, even when Griffin is not moving at all. Also, we can notice that in this case, Griffin's speed will take effect much later than at required speed. While required speed is 27.216m/s (42 * 0.648), at this speed third term in the missile damage formula is 1, however, it still does not have any effect because second term is 0.30. We will need to solve different (and more complicated) equation to get the speed of Griffin which will lower damage further below those 30%. After calculation we see that speed of the Griffin needs to be at least 141.89m/s to have further effect on reducing damage, which is more than 5 times more than required speed of 27.216m/s.

When fired, a missile will leave the launcher, quickly accelerate, and then proceed at its best speed directly at the target until it runs out of fuel. If it encounters the target during that time, it will explode - otherwise it will vanish. The approximate maximum distance that a missile will travel can be found by multiplying the speed of the missile by the number of seconds that its fuel will last. (The approximation is due to eve running at 1 second intervals while missile flight time may not be a whole number. Also the missiles start at slower speed as the missile accelerates .) 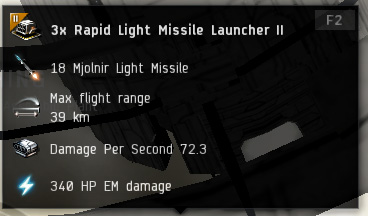 There are two special cases to missile flight time.

This information, as modified by your skills and equipment bonuses, along with the missile's dps and type of damage, is shown when you move your mouse over the icon for a missile launcher while in space.

If the target is moving directly at the missile, then the missile will reach it much faster than it would reach a stationary target. In this case, the target may be "in range" even when it seems too far away to hit.

In most cases, however, the target will be moving in a curve with regard to the missile ship - possibly in an orbit, possibly curving towards or away from the launch. It is hard to specify the range, exactly, in these cases, but as always, the missile will head directly for the target, and it will continue as long as it has fuel. Its path is likely to be some sort of a spiral.

There is no way to control the path of a missile once it has been launched. It will point itself at its target and follow the target until it hits or runs out of fuel.