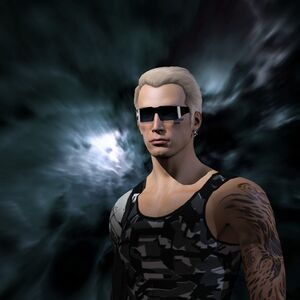 Cerulean Ice began his EVE career in the world of small industrial corps with missioners and miners, under the alter ego Vecana Rayne. Within a couple years, he decided it was time to seek out grander things. Recreating himself, Cerulean Ice was born and began to seek out larger corporations, quickly learning of EVE University in the process. He went for the bait and wound up immersed in classes and wiki pages.

Cerulean spent his first stint in the uni behind the scenes, not really putting himself out there aside from forum posts and joining fleets or classes. He did frequently show up to Neville Smit's introduction classes to help with linking items or names. He keeps every manager and director on his watch list, after all.

On 2012.06.05, Cerulean Ice joined Repercussus, part of the RAZOR alliance. He was there until 2013.03.04, when he left the corporation and returned to highsec. He reapplied to the university to become a teacher. Since then, he has been teaching classes, recording classes for the library, and posting on the EVE University forums.

On 2013.09.01, Cerulean Ice began work as a Personnel Officer. During January of 2014, due to time constraints, he left the PO department.

All syllabi are property of EVE University under the Creative Commons. UniWiki:Copyrights

Syllabi extensively edited, at one point, by Cerulean Ice.

Cerulean Ice also has the following other medals.

Cerulean Ice got onto his first supercarrier kill while in RAZOR.

He also killed himself while in RAZOR.