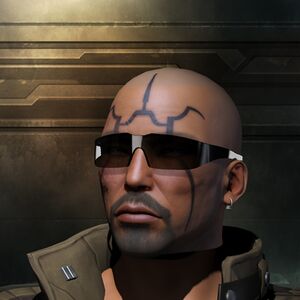 Jameson [1] is an EVE University Graduate and currently serves as Assistant Personnel Manager.

He can be found online daily at various times. His time zone is GMT-6 (DTS applies every year, so in summer he is GMT-5).

Jameson joined EVE on 2012.04.21 and E-UNI on 2012.05.17. Coming from the Minmatar tribe of Vherokior and from a family of Retailers, this was not the path Jameson wanted to pursue. His eyes were on the roids and the value of obtaining them. He began his studies with in game classes and utilizing the class library to achieve his base goals. Hearing of the Amarr Mining Camp, (AMC for short), Jameson went questing to find this place. The AMC took him in and he has begun to succeed. He moved to the AMC Solitude Camp in September 2012 but still maintains assets and a Jump Clone in the AMC Home System.

After a brief LOA in late 2014 due to RL Business, Jameson returned to Eve, the Uni and the Personnel Department in the Summer of 2015. He once again served as a Senior Personnel Officer (SPO). Taking a break from Mining and Missions and wanting to experience something new, Jameson has joined the NSC and currently does PI. With top Skills in PI, Mining, Refining and Industry, Jameson manufactures Fuel Blocks and other mats.

February of 2016 brought a brief, temporary appointment to the Teaching Department as an Assistant Teaching Manager (ATM). His main responsibilities were to recruit and develop E-Uni Teachers and Guest Lecturers. Jameson still wore the SPO hat and thoroughly enjoys both duties. He resigned this position with the appointment to Assistant Personnel Manager (APM) in April of 2016. As APM his main responsibilities is the recruitment and training of new Personnel Officers.

Out of game, Jameson was born in Monroe Louisiana in December of 1947, self-employed and semi retired - owning a web design and hosting company, and he is an ex US Naval Personal and Weapons Officer who served during the Vietnam era. He graduated from UCLA with a BA in Business and resides in Dallas Texas with his life partner, as well as a pug - Winston Churchill, a traditional Scottish Terrier, Maggie and two Wheaten Scottish Terriers, Skye and ... wait for it.... JAMESON! (Named of course after the whisky because Jay has a blonde streak down his back and when mixed with his white coat resembles a shot of Jameson.), and our latest addition a little Maltese/Chihuahua mix rescue named Maisie.

Jameson has two passions, computers and video games. Jameson has been playing video games since the Radio Shack TRS-80 made its debut. He favors RTS, RPG and some FPS. His current playlist consists of Eve, Elite Dangerous: Horizons, Jurassic World Evolution, Planet Coaster, Cities: Skylines and numerous others. He has, of late, gotten into VR with the help of the Lenovo WMR headset and enjoys Elite, Subnautica and Arizona Sunshine in this medium. Visit his Steam Profile for other interest. He recently built his "dream system" with the help of Asus Republic of Gamers.

Jameson serves as the Orientation Manager who is responsible for overseeing the operation of the Orientation Department, including recruiting new Orientation Officers, monitoring the quality and quantity of Welcome Letters, keeping the department's documentation up to date, and making changes to the EVE University Portal.

Jameson served as an Assistant Personnel Manager until July 2018. As an APM he was primarily responsible for recruitment and training of new Personnel Officers. A Naval PO for many years, Jameson brings to the table experience in dealing with new recruits as well as the old timers. He may be found in the E-Unit Public Channel as well as other University channels.

Jameson joined the AMC in June of 2012 and with the help of the AMC Ship Loaner program, he obtained a fully fitted Retriever. He mines with the Shared Can and BYOC fleets that operate in the AMC home systems.

Jameson has the skill sets necessary for joining the ranks of Perfect Refine and is working towards those.

Currently Jameson is grinding for Perfect Refine and busting roids. He welcomes questions about missions, so feel free to contact him.

Taking a break from Mining and Mission running, Jameson is currently active in the NSC. He also does PI in Null.

Jameson is very proud and honored to have been awarded these medals: