Singularity (also known as "Sisi") is CCP's public test server. New code, features and various tests will be held and conducted on Singularity prior to their implementation onto Tranquility. Very often it is on Singularity where players will be able to catch the first glimpses of what new expansions will bring. The test server also has every single item listed stocked on the market, except for faction items such as ammo and ships, for 100.00 ISK. This makes Singularity a great platform to test out ship set-ups without risking millions of ISK.

Players are able to log in to Singularity through the normal EVE launcher and test upcoming game changes.

Unlike Tranquility, Singularity is not continuously updated, so characters on Singularity are not identical to their counterpart on Tranquility. Characters, accounts and player owned structures are periodically mirrored over to Singularity, usually when the next major release moves into Beta. Activities done on singularity have no effect on Tranquility.

Connecting to Singularity via Steam 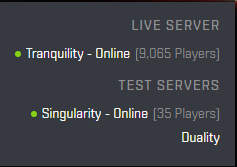 Unlike Tranquility, Singularity has additional slash commands for normal, non-GM characters to help facilitate player testing and the general use cases of the server. These will help you better orient yourself as well adapt to your desired situation primarily given that the database copies from Tranquility to Singularity take place at an irregular frequency. CCP has outlined the list of support commands on their support page for Singularity.