The New Eden Store (NES) is an in-game store where you can buy various cosmetic items for both your character and your ship, as well as various account service tokens. 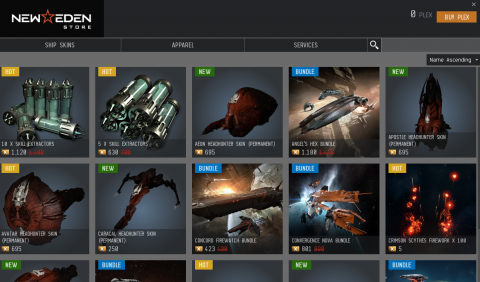 The New Eden Store has various items available for PLEX.

The store was first introduced as the Noble Exchange (NeX) with the Incarna release back in 2011, but this new version of the New Eden Store was introduced in the Kronos release in 2014. Originally a place for purely cosmetic items that had no real effect on your performance ingame.

The choice to open up for skill trading with skill injectors and skill extractors in February 2016 changed that. Additionally the store changed from using Aurum to PLEX as of the removal of Aurum as a currency and the introduction of the PLEX vault in May 2017.

Items available in the store

There are currently three categories in the New Eden Store: