From EVE University Wiki
Jump to: navigation, search
This page should be updated due to game changes.
Reason: #ECM drones need some attention. Only the Procurer and the Skiff appear to have 100m3 drone bays.

Main article: Averon Mining Campus
This guide is designed to detail the use of ECM Drones and AMC assigned ECM Griffins for the purpose of defending yourself and other AMC members who may need assistance. For detailed guide about drones, electronic warfare, or ECM, see Drones, Drone mechanics, Electronic warfare and Electronic Countermeasures.

The information contained within this guide are designed to be use for defensive operations only. It is not intended to be a guide to instigating or participating in combat operations in AMC space.

AMC Search & Rescue Operations are intended to give members of the Averon Mining Campus who may not be experienced in EWAR or combat operations a set of tools that will enable them to maximize their chances of escape should they be unfortunate enough to find themselves under attack during AMC Mining Operations.

Electronic warfare at the AMC

An unfortunate reality of life in the AMC and of mining in general is that, generally speaking, miners make easy targets. The majority of ships that are used in both solo and fleet mining operations simply cannot withstand the DPS that a well flown, well-fitted combat ship can put out. Once tackled, it is usually just a matter of time before the attacker is able to burn through the defenses of even a well-tanked mining ship. This often means miners end up on the wrong end of a killmail.

This aggression can come from either normal gankers or enemy war targets (WTs).

EVE University often finds itself at war with various player corporations. Despite our best efforts, some of these corporations are aware of the location of the AMC, and during times of war unexpected visits from war targets are not uncommon.

War targets can attack you without any interference from CONCORD or act of aggression from you.

The AMC discourages engaging war targets in open combat, as doing so often encourages more frequent enemy visits to the AMC area. The AMC officers instead recommend that all members of the AMC be capable of defending themselves and, if they wish to do so, their corpmates, using Electronic Countermeasures (ECM).

ECM (also known as jamming) is a type of electronic warfare that, when successful, will break any active targeting lock the affected ship has. Further, it will also disrupt the targeting systems of the affected ship after the lock has been broken, making it impossible for the affected ship to re-target anything else for a period of 20 seconds. However, ECM does not prevent the use of weapons and systems that do not require a target lock to function, such as smartbombs or unguided missiles.

How does ECM help ships escape?

Generally speaking, the successful destruction of another player's ship relies on the aggressor's ability to keep it within range of their offensive weapons. To do this, the first thing most hostile players will do when attacking another ship is disabling that ship's warp drive via a Warp Disruptor or Warp Scrambler module. However, the weakness of warp disruption and other movement-impairing modules is their reliance on a stable target lock on the disrupted ship. By breaking that lock, any movement impairing effects that were applied to disrupted or impaired ship will be removed, leaving it free to warp to a safer location.

AMC pilots will sometimes find themselves alone and not part of a fleet, such as during solo mining operations or other solo activities. In these situations, the easiest way to retain some ECM capability without fitting EWAR modules is to use ECM drones.

All Mining Barges and Exhumers have drone bays that can fit ten light drones, with the exception of the

Retriever which has a smaller drone bay and can carry only five.

What this means is that in the majority of cases you can carry a full complement of 5 defensive Light Combat Drones along with 5 Hornet EC-300 Light ECM Drones. Or if you would prefer you could carry more of any one type, however the amount of drones you can fly at any one time depends on the capabilities of the ship you are flying.

Using any drone requires the pilot to have the necessary prerequisite skills.

The Hornet EC-300 requires the following skills to use:

Some of these skills may take a little while to train for newer pilots – however the obvious advantage they give in terms of defensive capabilities make it a worthwhile investment.

The EC-300 is used in the same way as any other drone - simply lock the target that has locked onto your ship, and send the drones to attack that target. Once deployed the EC-300's will attempt to jam the target repeatedly. If successful, the enemy ship will lose their lock on you and you can warp away to a safer location, generally a safe spot you have previously set up in the system you are mining in. It is recommended that at all times during ECM you are aligned to your safe spot. The use of drones means there is no need to break the alignment to your place of safety, this dramatically reduces your warp out time if your drones are successful.

Once successful, it is generally considered wise to leave your deployed EC-300's to their fate, as they are cheap and easily replaced. Trying to collect them or waiting for them to return to you uses valuable time that could be better spent making your escape.

During general operations, and particularly during fleet mining operations, it may become necessary to help a corpmate who has been aggressed and tackled by a ganker or war target.

Assisting a corpmate in trouble is entirely optional. Sometimes doing so will involve putting yourself in harm's way. However, the AMC strongly recommends that, if you are in a position to help a corpmate in distress, and are prepared to help, you should do so.

There are two main ways you can help a corpmate in danger: the first, as discussed above, is to target the enemy attacking your corpmate and launch your flight of Hornet EC-300 drones at the target. Once the lock is broken you and your rescued corpmate can warp to a safer location. The second and more effective way is via the use of an AMC

Griffin, as detailed below.

The skill requirements for flying the Griffin are relatively low for a ship that is so effective against enemy targets. The only skills that are necessary in order to be able to fly the Griffin are:

These two skills represent a total training time of approximately 25 minutes. However, these skills only enable getting into the ship, and do not cover the use of ECM or other piloting capabilities. The additional skills necessary for basic effectiveness are:

Some of these skills will develop a pilot's ECM skills far beyond what is required to be effective as a Search & Rescue Pilot within the AMC. Looking at the skills purely from the perspective of return on time invested, Caldari Frigate, Long Range Targeting, and Long Distance Jamming are worth training to at least level III.

The skills detailed above allow you to fly a Griffin at a basic level of proficiency. Additional skills are required to operate all of the modules that make up the AMC Griffin Standard fit. These are detailed below.

The fit as shown includes one of each type of ECM module. When acting as part of an actual AMC Search & Rescue Operation, however, pilots will usually fit four of the same type of ECM module, assuming the target's ship is known.

There are four different sensor types that ECM can target, and each is individually favored by one of the main racial factions. Using the correct racial ECM module against enemy ships will greatly increase the chances of successfully jamming the target ship. However, the race-specific modules are not named in a way that makes it obvious what race of ships they are most effective against. Instead, pilots should remember that the color of ECM module matches the background color of the racial ships against which it is most effective.

Modules should be fitted for the correct target before undocking. Each AMC Griffin comes with four of each type of racial ECM module – enough to fill four of the five midslots on the Griffin and give the best chance of a successful rescue.

Here is a typical search and rescue scenario:

All of this information will allow you to determine if a rescue attempt is sensible or even possible. For example, if there are many ships attacking your corpmate and he is several jumps away, chances are you will never get to him in time. Even if you are close or in the same system, would rescue be possible? How many enemy ships are there vs. how many available AMC S&R pilots willing to engage? Even 1 to 1 is an extreme risk if there are many enemies, as the AMC Griffin lacks offensive capabilities. If there is a reasonable chance that by attempting a rescue you will be giving the enemy two killmails instead of just one, do not attempt a rescue.

Rescues should only be attempted if there is a reasonable chance of success.

To continue the above scenario, assume that the attack is being carried out by a single war target. There are two S&R pilots available and the rescue will be in the current system. You decide to go ahead and attempt a rescue. 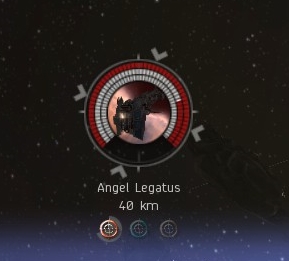 What if it all goes wrong?

In general, it shouldn't. If you follow the rules above, you should be fine. However, things change in combat all of the time. If anything changes even slightly to affect the pattern of the engagement you should warp to your place of safety immediately. This could include:

Any change to the scenario that may introduce an additional risk to you and your Griffin should result in an immediate abort to your place of safety.

What if I am the one under attack?

First and foremost, don't panic. Do the things and only the things that will increase your chances of survival.

The availability of AMC Griffins does not give any miner an excuse for flying a badly-tanked, badly-fitted or inappropriate ship. You must ensure that your ship has the best tank possible. In this scenario, . Time is your friend and your enemy when tackled, have enough of it to be rescued and all will be well. Have too little of it due to an inadequate tank, and no amount of ECM pilots will get to you in time to save you.