Anyone can create a fit, right?

Yes, anyone can create a fit. Whether or not that fit is good, or even works at all, is debatable. You can't expect to join EVE and be making alliance level doctrine fits within a week. It's a long process that requires understanding the basic items you should probably fit (such as prop, tank, mods to fit the role), right up to the slight differences in various types of the same mod and the repercussions fitting that mod will have (fitting space, stat alterations etc).

One thing I will state here is that if you think a theorycrafter and an FC are the same thing, you are very, very wrong. You can be an amazing analyst, able to decide what meta MWD you will fit on your Machariel and why you're going for 800mm ACs instead of 650s, but at the same time be terrible at commanding a fleet of said ships. The inverse is also the case. (You can also just be terrible at both, of course)

We'll assume that you already know the ship you will be creating a fit for. Some of you are probably sitting there scratching your head right now wondering in what scenario you would be creating a fit when you don't know the hull. That's for another day though.

So, let's take this situation. You have been asked to create a fit for an ARMOR FLEET BRAWLING TEMPEST. That's most definitely enough to go by.

I strongly suggest you download one of the out of game fitting tools, such as PYFA. The in game fitting is ok, but nowhere near as easy and quick to prototype new fits.

Back to fitting, we'll start with the hull itself first. You want to analyse the bonuses this ship gets and we can see the Tempest gets:

So, let's start with the best form of flattery: copying. We look at what people have been flying.

https://zkillboard.com/kill/62308245/ - Hmm, not what we want, this is a self repping fit, we don't want that for fleets at all. Also, the guy died to war targets in Jita so maybe not best mimic that fit (what is that rig for?). We'll ignore this one for now.

https://zkillboard.com/kill/62070065/ - Ok this is more like it. He died with a group of his friends and had logi, if you check related kills.

So looking at the above fit, take note of what it has fitted:

We'll start in Pyfa (or EFT), by fitting a few basics to our empty Tempest then. The balance between tank and damage is important, I personally prefer to fit tank first, so I can ensure the ship will actually stay alive longer than a few seconds.

We know we need tank so we'll fit 2 armor plates like the fit above. (Most battleships will fit 2 x 1600mm armor plates for armor fleet fits). We'll also fit a Damage Control - a fantastic mod that does not get stacking penalised by other resist mods but provides shield, armor and hull resistance. (Hint: Don't fit a fleet ship without buffer) 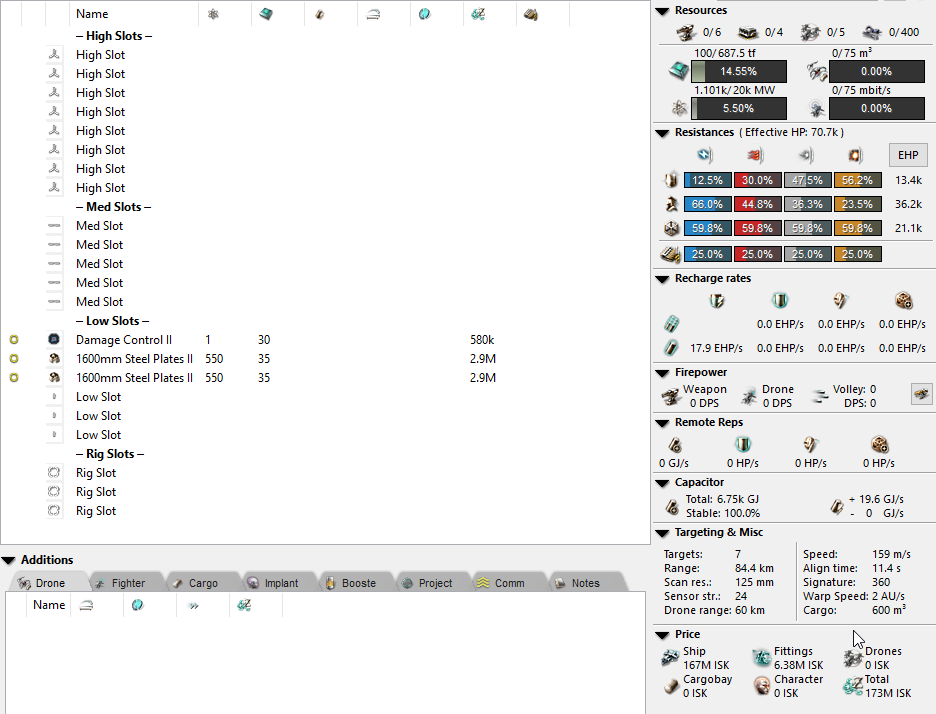 We have three low slots left now, perhaps we need some armor resistance? Let's throw on a few Energized Adaptive Nano Membranes. We only really want two on there because stacking penalties will hit us quite hard after that. Finally, our explosive resist is quite low, so let's throw on an explosive membrane on too. 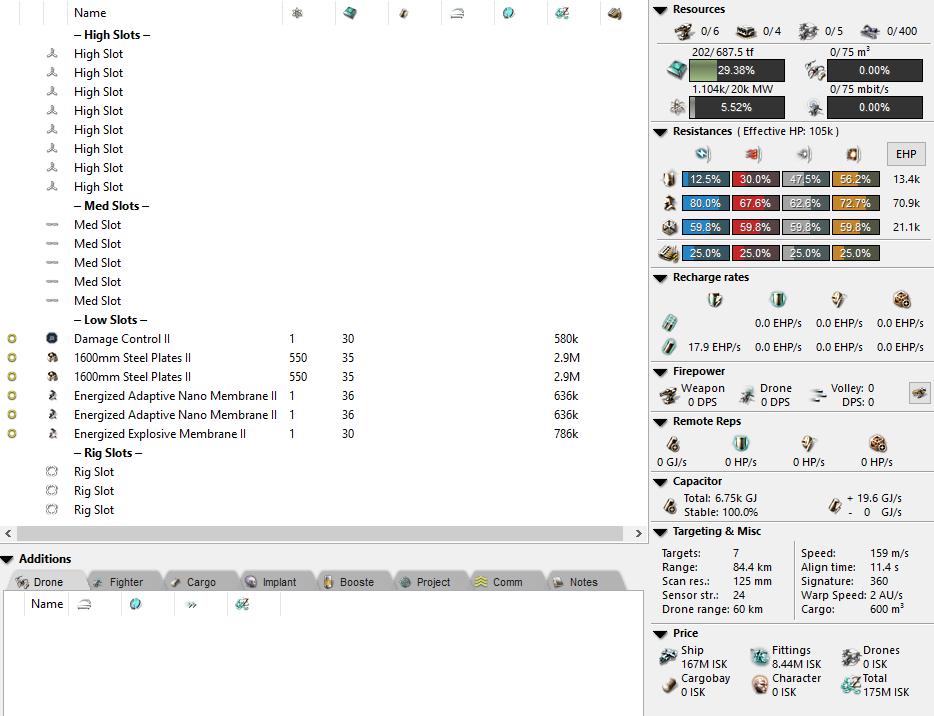 We probably need some weapons. So let's grab some 800mm autocannons. We definitely don't want artillery (the other form of large projectile) because they are not designed for brawling. Arty is better suited for longer ranges as its tracking is horrendous up close, it also has a huge cycle time. We've still got quite a bit of room left after we fit the 800s. 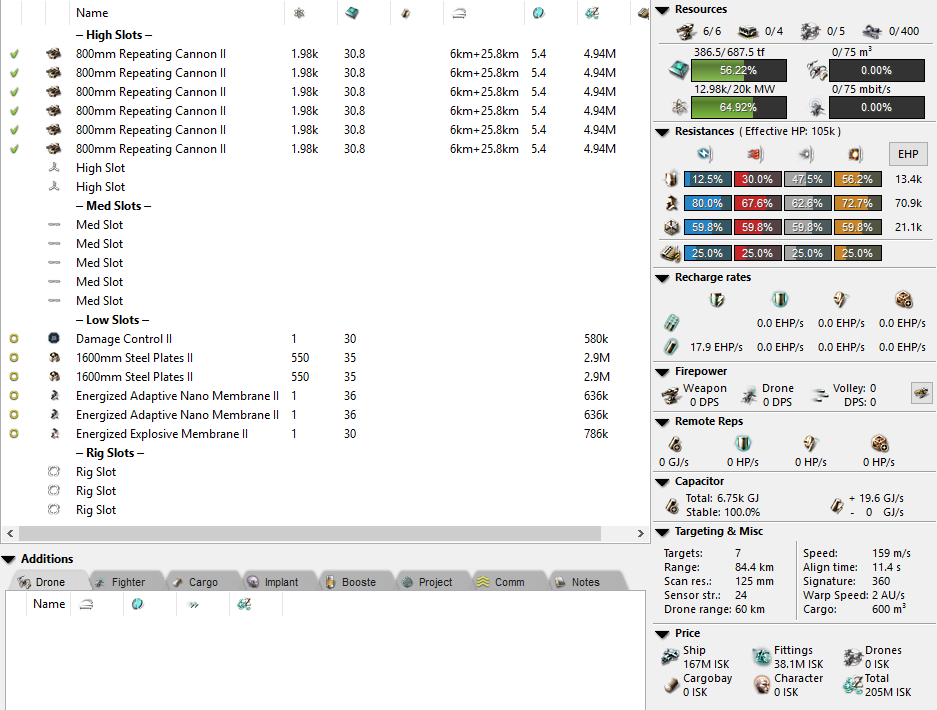 We'll probably want to fit a prop mod of some sort to get around the battlefield. I personally prefer ABs on my brawling battleships, though some use MWDs. The downside to the MWD is it has a big drawback to your capacitor pool (-25%) with most MWDs up to T2. You are also prone to being scrammed and having your MWD shut off. On the flipside, ABs are much slower. After we've stuck a prop mod on, we need to decide a few other things in our mids. Usually, for this type of fit, we'll have several 'refits' for our mid slots that are designed to be switched around depending on what you are fighting. For now, we'll add a scram (for tackle or boosh resistance), a damp and a tracking disruptor. I'll also add some refit mods to the cargohold just in case. The reason we fit these is that they apply additional pressure to our enemy and in reality, what else are we going to fit there? You could fit something like a Tracking Computer if you wish though. 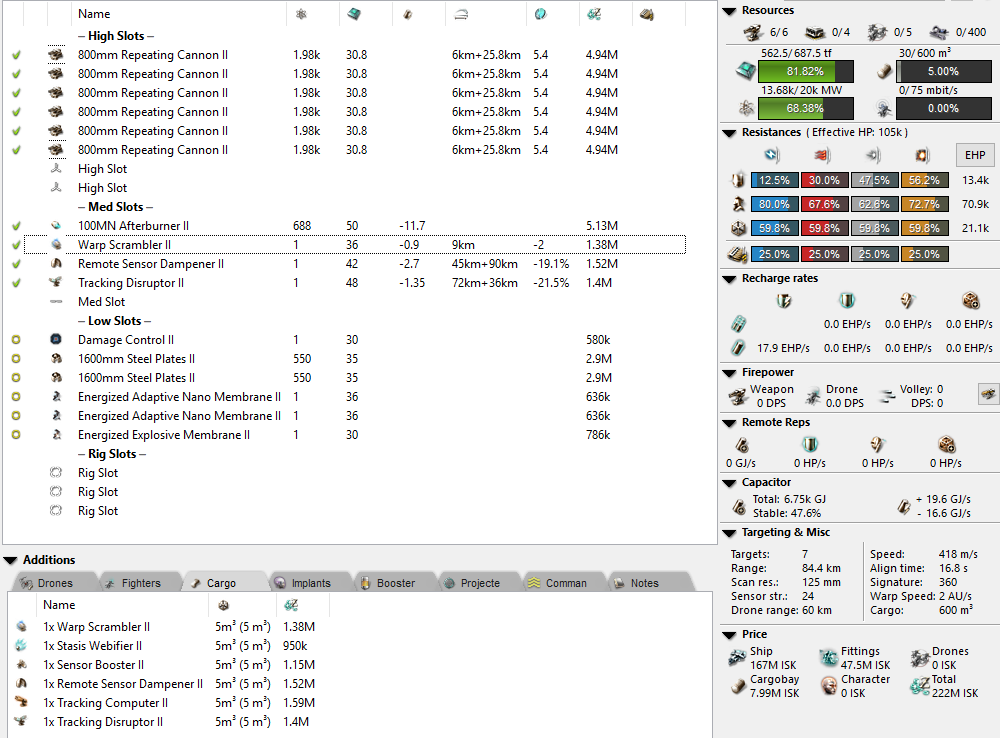 Now, you'll notice that I've left a midslot empty for now. There's a very good reason for that. If you can see, there are two empty high slots on the Tempest, that you cannot fit guns on. Sure, you can put missile launchers on there, but remember what we said about bonuses? Instead, it's going to be incredibly powerful to have mods like energy neutralizers fitted there. So, let's shove on some heavy neuts as well. However, with two heavy neuts active, alongside our mids, we run out of cap in 3 minutes. 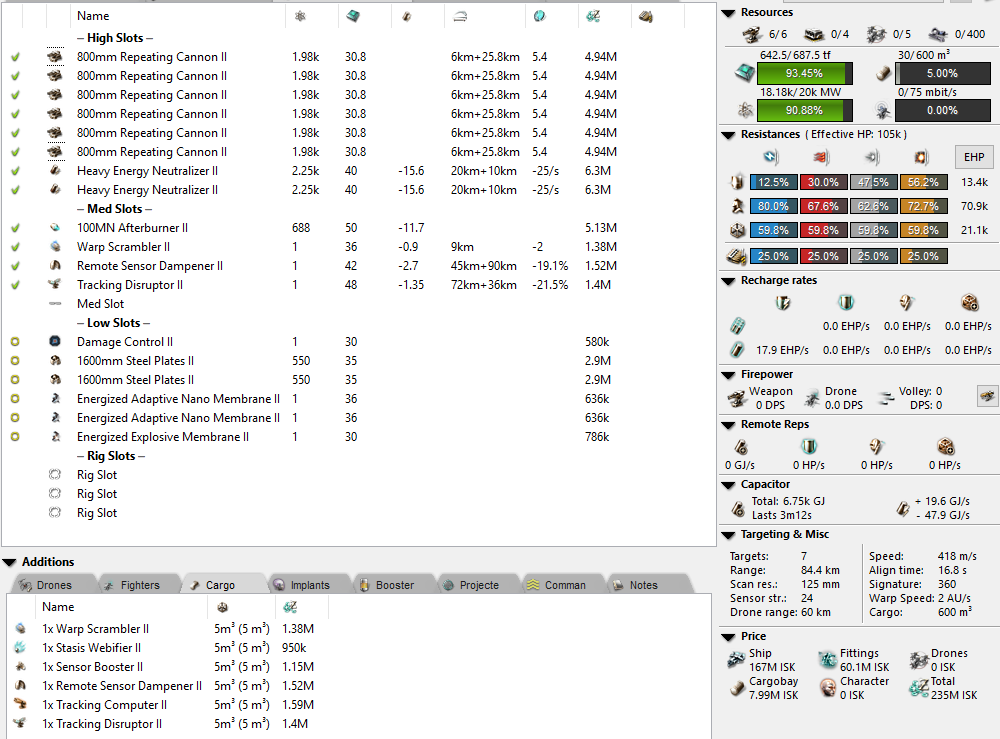 While that's not terrible, you also don't want to be in a situation where you are neuted back and you have to drop your tackle, ewar and prop mod. So, we'll throw a cap booster on there. It has to be a meta level one as otherwise you go over on powergrid. 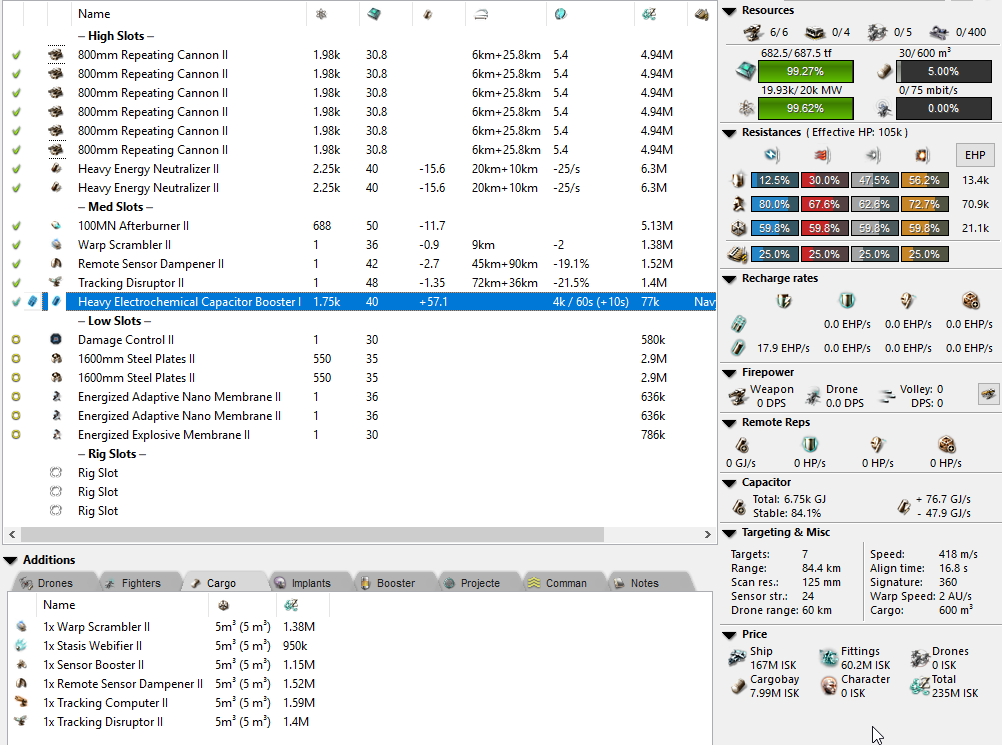 Looking good so far, we're just missing a few finishing touches. Let's load the guns with some default close range, high damage ammo, add some drones in, and finalise our rigs. I've gone here with the optimal drone choice for damage, 2 heavies, 2 mediums and a light. They will be prone to smartbombing so we need to be careful. The alternative is throwing sentries in. They do less damage, but you can drop them in a safer place and they'll stay alive longer (and no travel time). I've gone for full buffer rigs. And here we have our first iteration of a fit. 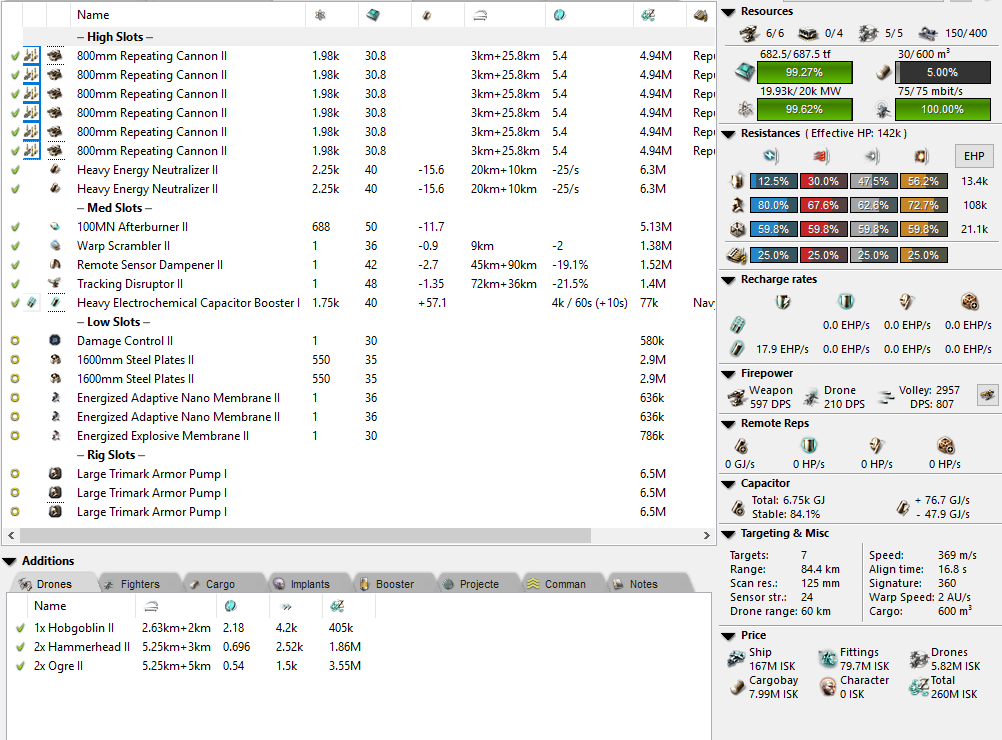 Once you have what you think is a complete fit, you must play devil's advocate and decide whether it is truly "perfect".

I've purposely chosen a simple ship to work with here, as there's really not a huge deal wrong with the original fit at all. What you could say, however, is that dedicating all of your available slots to tank is quite considerable. The damage output is also not fantastic. So, let's have a think what we can do in a situation where we wanted to increase our damage.

We could remove a plate to fit a Gyro, but that would significantly reduce the raw armor hp on the ship, giving the pilot and logi less time to react to a target switch. Not something we want to do. We could also remove one of the Energized Adaptive Nano Membranes. But that leaves us with very low resists for thermal/kinetic. How about that explosive membrane? If we remove that, our explosive resist drops from 72.7% to 55.1% and our overall EHP from 142k to 128k. Not ideal. What what else can we do with that? How about if we remove a trimark, and fit an anti-explosve pump instead? Then throw a Gyro in its place. 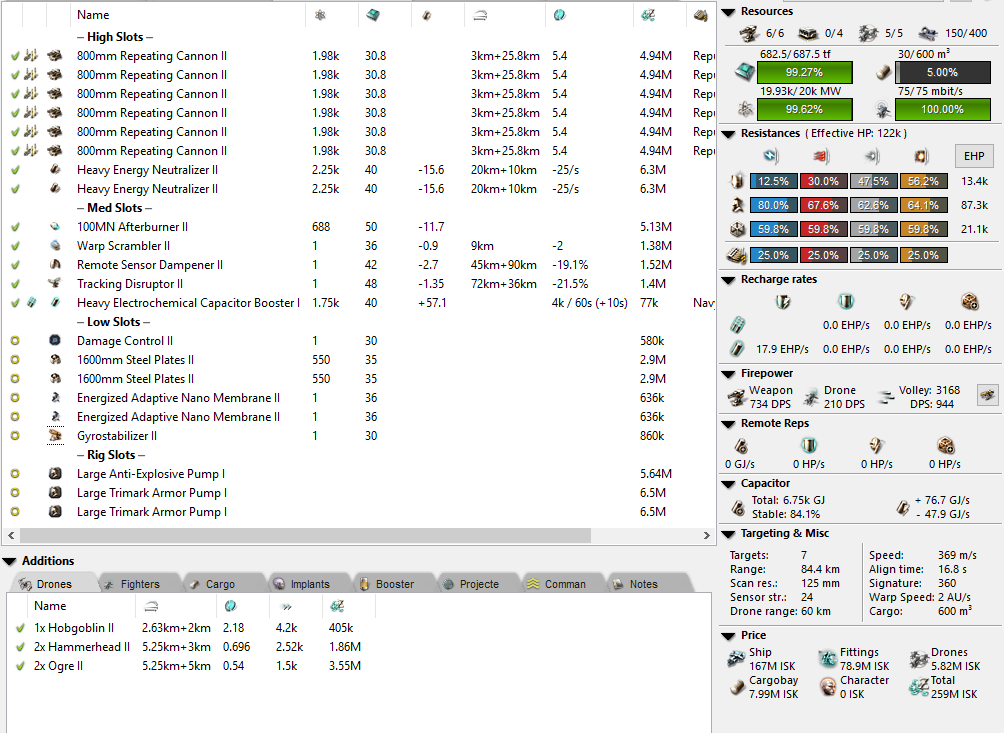 So our dps has gone from 807 to 944 combined. An increase of 17%. However our tank has dropped a bit to 122k EHP from 142k, a 14% drop. We could argue that our resists are much closer together now and the high explo resist would really not have helped us much in the previous iteration. We did lose some buffer by making this change though as we had to replace a trimark. This is probably a more well balanced fit, however, as the damage output is significantly higher.

So, did we achieve what we set out to do? I think so, yes. We made a perfectly capable armor fleet fit brawling tempest. Someone else may have come up with a slightly different fit, but that's the joy of EVE. Nothing is ever 100% correct and even in the example above, there will most likely have been a time where you wished for that extra buffer over the increased damage the gyro gave you.

Why did I not fit green/blue mods? Well, there is no real answer to that that can cover all situations, unfortunately. For this instance I could well have fitted a few. Take the fit below as a good example. It's not overly pricey, but the extra expense isn't totally wasted. We gained some good resists and 8k EHP for 60mil ISK. 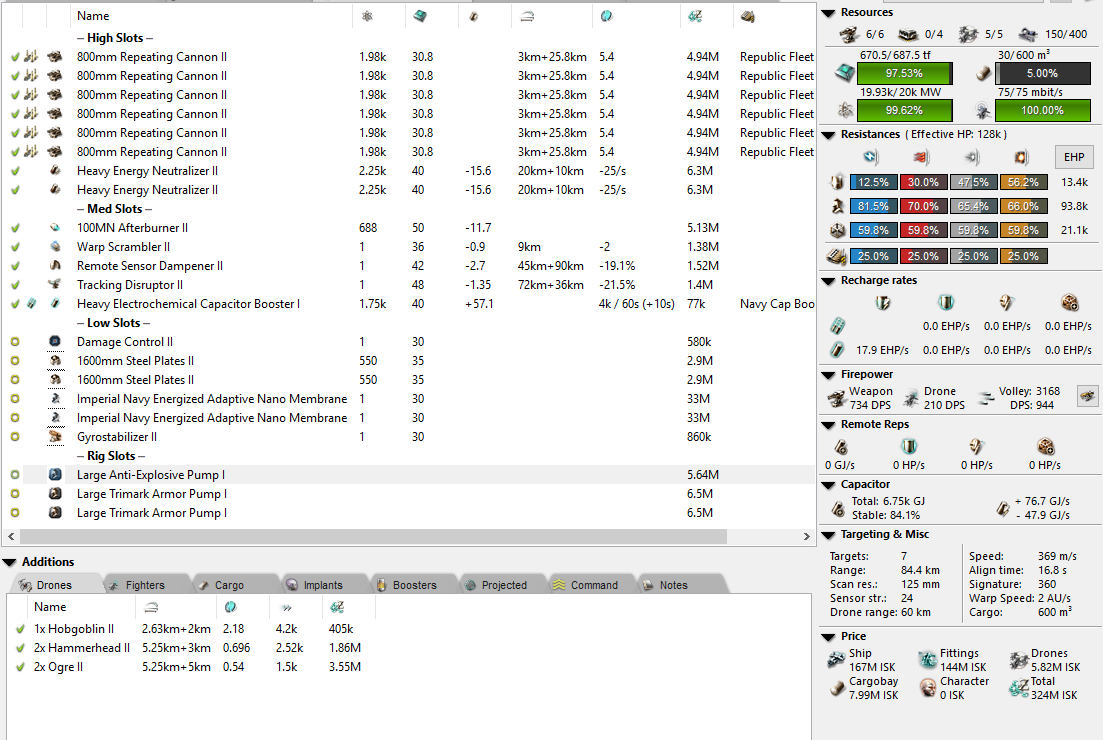 When you make decisions like that you have to ask yourself if the increase is really worth the expensve. For something like a T1 battleship, you wouldn't really go all out on bling. Faction battleship, perhaps yes, I wouldn't hesitate fitting A type deadspace mods to a Machariel, but not to a Tempest. Maybe not even to a Tempest Fleet (I'd probably stick faction on however).

As a rough guide, if you're spending around the same on mods as you are on the hull, you're in the right ballpark. If that number starts creeping up, you just need to make sure you know what you are doing.