An offensive gatecamp is formed with battlecruisers and larger ships tucked into the gate at 0m and cruiser and smaller craft orbiting the gate between 1000-2000m. Fleet interceptors and destroyers specifically fitted for fast locking can sit at 0m with 0m/s speed with MWDs on in order to quickly give chase to hostiles jumping through. Offensive gatecamps allow the fleet to remain mobile, able to jump through the gate in pursuit of an enemy.

The fleet will set up with tacklers orbiting at 1000-2000m and all other craft spread in a sphere around the gate at their optimal ranges. This puts EW and snipers in their best positions, spreads the fleet out and puts the fleet at 100% effectiveness for range. Fleet interceptors and destroyers specifically fitted for fast locking can sit at 0m with 0m/s speed with fleet drones (if deployed) assigned to them. It is not suited for mobility however, since most ships will require warping to a celestial object and then back in order to jump through the gate. This type of gatecamp is useful when you know the enemy is coming to you. 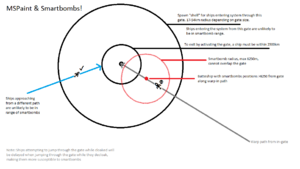 A special form of Gatecamping utilises Smartbombs as a way to deal damage to enemy ships when they either land in a Bubble or directly at the gate. Battleships are commonly used, as they can fit a high number of Smartbombs and can tank the gateguns in Low-Sec.

As can be seen in the picture, Smartbombs at the gate are usually set up at >6250m, so they do not overlap with the gate. Any ship warping to a gate will have a short period between landing and jumping the gate. This time is utilised by the smartbombing ship(s) to deal damage. 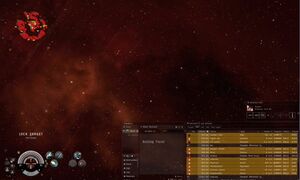 Hostile gatecamps are common throughout New Eden. Pipes from high security space going into low security space are some of the most common routes that are camped. There are multiple types of gatecamps to be on the lookout for, a few include:

A Gatecamp with bubbles

You will only find these kind of Gatecamps in Null-Sec(0.0 space). Some of the techniques used for Low-Sec Gatecamps can be applied to these. The difficulty with Null-Sec camps is that multiple gates in the system can be camped using drag bubbles.

As you can see from the image, warping in on the axis of the bubble with drag you into it, catching you off of the gate, making you a very easy target. Remember: Bubbles prevent you from warping, but they will not deactivate prop mods, so you can still burn out of them. Never give up hope!

A bounce or Tac is used to counter drag and catch bubbles. It allows you to warp to a gate off of the axis that bubble is placed on so that you will land near the gate instead of the bubble, then from the bounce you warp to the gate and jump. The reason why bubbles pull you out of warp like this is because when you warp EVE draws an invisible line between you and your destination, the line also extends beyond your target location by about 90km.

When there's a bubble on that line, even the extra 90km, the game says "You've been caught in a bubble!" and warps you to the bubble instead of your target. That's what makes it possible for the bubble to "drag" you past the gate.

A "bounce" can be a celestial in-space that allows the player to route around the bubble alignment. It can also be a bookmark in space, on or off-grid from the gate itself, used for the same purpose. These bookmarks are sometimes called a "ping", a "tac" (short for tactical bookmark), or simply, a bookmark.

Setting up a Bounce

Several third party websites are useful in scouting ahead along your path.

1. Use https://eve-gatecheck.space/eve/ to check your route before and during your journey. This tool will scout your route using ZKillboard and identify any Gatecamps along the route, coloring the camped system in red. If Smartbombs, Interdictors or Heavy Interdictors are present on the kill reports for the Gatecamp it will post a large warning for that system. Since this website pulls from ZKillboard it can be delayed for 15-30 minutes in reporting a new Gatecamp.

2. Interrogate each system along your route individually using https://zkillboard.com. This is the method that gives you the most up to date details about a system, however is the most labor and time intensive.

3. Map your route using https://evemaps.dotlan.net/route. This tool will provide you intel along your route, including recent ship and pod kills, but not immediately identifying a Gatecamp like the first link above. This tool updates hourly, so will not identify a newly camped system.