From EVE University Wiki
(Redirected from Odyssey Exploration)
Jump to: navigation, search
This page should be updated due to game changes.
Reason: November 9, 2021 patch (Version 19.10), added new types of Exploration sites. Add to main Explo page, and any other relevant page (e.g. Data and Relic sites) as appropriate. 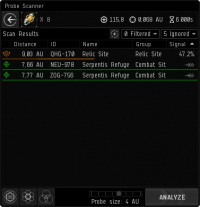