Tech 3 ships - Strategic Cruisers and Tactical Destroyers - are made using materials obtained in wormhole space, some of which need to be processed in Refineries in Low/Null or WH Space and can be constructed in Upwell structures anywhere. As can be seen from the following flowchart there are 4 distinct manufacturing stages: 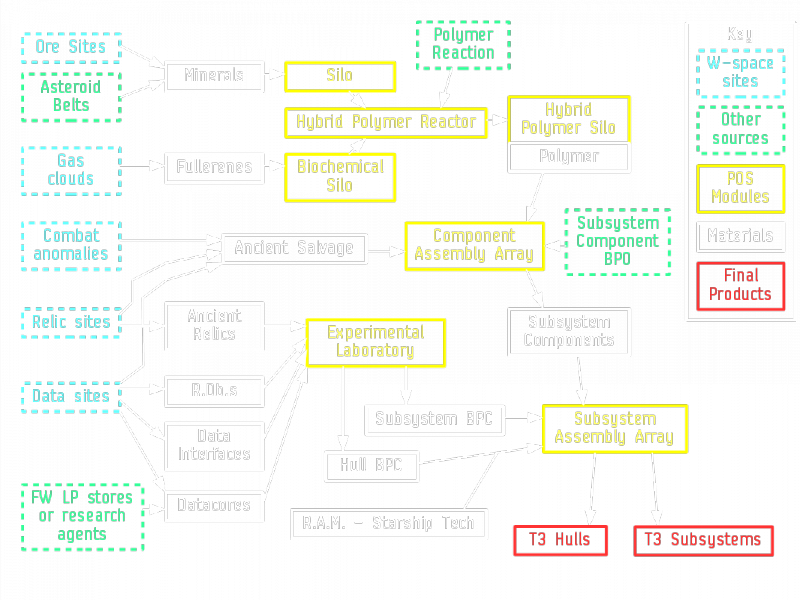 Reactions in Refineries now work just like normal industry jobs. The refinery needs a Standup Hybrid Reactor I service module online and can be rigged for material and time efficiency using T1 or T2 rigs. Please ignore the silos shown in the above flowchart, they refer to the old reaction mechanics.

Despite the name, these components are used to construct both the subsystems and the hulls. You can manufacture these in station facilities in k-space, or at a Component Assembly Array (contains major benefits for time and material efficiency) at a POS. The BPOs are available under Blueprints > Manufacture & Research > Components > Subsystem Components and may be researched & copied as normal.

Since Upwell, T3 components, subsystems and hulls can me manufactured in any Citadel or Engineering Complex with a Standup Manufacturing Plant I service module online. It works like any T1 industry job:

As you are now in no doubt, T3 construction is one of the most complex manufacturing process in EVE. Most of the T3 production activity in EVE is carried out by wormhole-based corporations at their own structutes in w-space (although a fair amount is also done by sov null based corporations). The additon of Upwell Stuctures made it possible to assemble a T3 ship inside a wormhole. Previously the finished ship hull needed to be shipped out to k-space, assembled in station, and flown back into w-space for use since it was impossible to assemble a ship inside a POS.

T3 ships are therefore very expensive, with prices for a hull and all four subsystems (currently, June 2018) around the 300m-400m ISK mark.