From EVE University Wiki
(Redirected from Passive Shield Tank)
Jump to: navigation, search
It has been suggested that this article or section be merged with [[:|heavy overlap between tanking, Shields and Passive shield tanking]]. (Discuss)

Passive shield tanking (often shortened to simply passive tanking) is a method of tanking that relies on the ability of shields to recharge without the need for active modules. Instead, passive shield tanks rely on modules that increase this recharge rate, as well as the absolute amount of shield hit points a ship has.

In particular, passive shield tanks can be effective on ships built for kiting or long-range combat tactics, both of which keep shield damage relatively low. As above, it can also be used when employing hit-and-run tactics as well.

Without any modules, and assuming the pilots had the same skills, the

Drake would rebuild its shield almost three times faster than the Kestrel. The Raven would rebuild about twice as fast as the Corax, but slower than the Drake. All other things being equal, the Drake, with its large shield capacity and very fast recharge time, would make the best candidate for a passive shield tank.

These cruisers and battlecruisers provide a representative sample comparison of ships by faction.

The Caldari and Minmatar tend to have the larger shield capacities and higher shield recharge rates. Thus it is not surprising that ships of these factions are more likely to be shield tanked.

In fleet situations the assigned combat role may be a factor. If the ship is to be tackling other ships, for example, its mid power slots may be needed for e-war modules, and it may be exposed to high, brief peaks of damage - so an armor tank will likely be preferable.

The usual starting point is to try to fill several low slots with Shield Power Relay modules, several mid slots with Shield Extender modules, and to fit all three rig slots with Defense Field Purger rigs. Of course, this will need to be modified to fit slot availability, resists and other considerations, but it is a good place to start.

With that in mind, although Shield Power Relays reduce capacitor recharge rate, they have no stacking penalties, and they are the most powerful modules in terms of increasing shield regeneration.

Shield Extenders increase the capacity of the shield, and, because recharge time is a constant, this in turn increases the recharge rate. These modules have a Signature Radius penalty associated with them, and they impact on the power grid, but they have no stacking penalties, and their benefits outweigh these costs. In addition, it is often possible to "upsize" Shield Extenders ... putting Large Shield Extenders on a Cruiser, for example, or Medium Extenders on a Frigate. The increased buffer will also allow the ship to survive for a while even if incoming dps is higher than the recharge. This way the pilot can kill the dps enough to survive further.

Finally, Defense Field Purger rigs are almost always more effective than Defense Field Extender rigs in a passive shield fit. The extender increases the capacity of the shield, which does have the effect of also increasing its recharge rate. However, the Purger directly increases the recharge rate by enough to make a difference. The Purger does, however, have a larger impact on Signature Radius.

Without the use of modules that incur stacking penalties, the calculation for passive shield regeneration rate is multiplicative; the more fittings added, the greater effect each fitting has.

Consider the Hurricane, a Minmatar Battlecruiser.

Why put a passive tank on a Hurricane? As an L3 Security Mission runner:

Shield power relays increase the recharge time directly. They have no stacking penalty, but they do reduce the recharge rate of the capacitor. 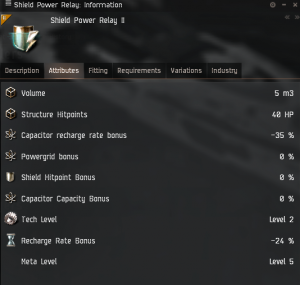 While this illustrates the power of the module, fitting six of them to a ship would be unrealistic. Three modules is a common fit, with the other slots used for other purposes. Thus, with no other skills or fittings, three Shield Power Relays would increase the Peak Recharge Rate to 17.3 hitpoints per second.

Shield extenders add hitpoints to the Capacity of the shield. The do not have stacking penalties, but they do increase the Signature Radius of the ship. 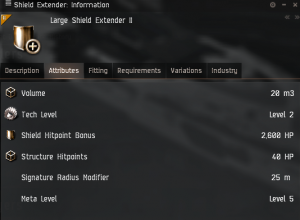 The original base Peak Recharge Rate was 7.6 hp/s. So adding a large shield extender increases the recharge rate by 4.7 hp/s; an increase of 62%.

These rigs produce a percentage increase in Shield Recharge Rate. They have no stacking penalty, but they do increase the Signature Radius of the ship. 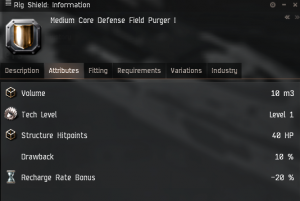 Since these are usually the last items to be fitted, this example will build on a fit that includes one Large Shield Extender II and three Power Shield Relay IIs.

The bare ship had:

After one Large Shield Extender II (see above):

The Core Defense Purger Rigs impact on Recharge Rate in the same way that the Power Shield Relays do ... by reducing the Recharge Time by a percentage.

So with this fit in place, an no pilot shield skills, the Peak Shield Regeneration Rate will be 54.4 hp/sec.

Any pilot considering a passive shield tank would want to train these to at least Level IV. At that level, their effect would be considerable. 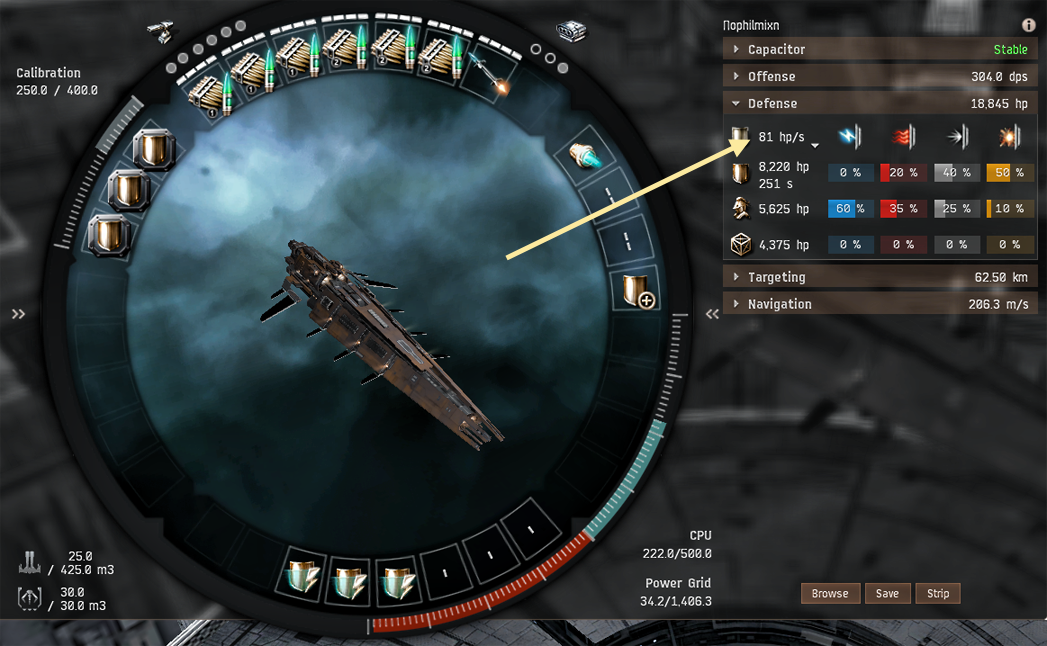 If you have come this far, it may be worthwhile pausing to think about what all this might mean. Keep in mind, first, that the shield begins recharging at the Average Rate and then builds towards the Peak Rate, which it only achieves when the shield is 75% gone. That means that these numbers are not very helpful in combat, they simply give a way of comparing a passive fit against a more active one, or against armor.

Passive fits more or less assume that you will be kiting, or at least firing from longer range, and that by so doing, you will not come under intense bursts of heavy fire. In other words, the shield needs time to rebuild itself as you fight.

The advantage of this approach lies in its avoidance of stacking penalties, which gives you more benefit per module fitted, and which in turn should give you extra strength in areas other than defense. This may come from having room to fit an additional module, or by savings in power or CPU that let you install more highly rated equipment.

Certain ships are often fit out with passive tank. Rather than copy those fits here, this article links to their Wiki pages, where you can see the full information, including a sample passive shield fit, for each ship.