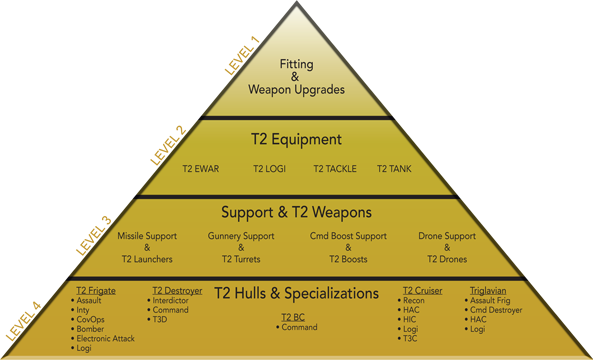 The first level of the Pyramid needs to be completed in its entirety and acts as the keystone that supports and ties together what follows; however, after this each level allows for specializations if so desired. For example, on Level-2 of the Pyramid you could choose to focus on T2 Logi and then move to Level-3 to work on T2 Command Boost Support & T2 Boosts without having completed T2 EWAR. This would benefit an Incursion runner interested in logistics and boosting as well as anyone looking to provide fleet support functions in any other kind of fleet. Some careful consideration will be required at each level to ensure you are gaining the skills needed to do the activities you are interested in.

In this way you will become an expert pilot that can provide unique capabilities in fleets and over time expand your portfolio of functions at this higher level.

Level-4 of the pyramid has no specific skill plans associated with it at this time. It is assumed that by the time you reach this level you would have a solid understanding of the requirements needed to specialize and choose a class of hulls and role within it.

Please note that NOT ALL of the skills on this plan are covered under EVE University's Skillbook Reimbursement Program Particularly those in Pyramid Level-4. The majority of skillbooks are covered but because this is a more advanced skill plan you will want to verify the individual skill book cost before assuming EVE University will reimburse you for it per the program guidelines.

The total costs for each stage of the plan are as follows (at the direct injectable price):

(All prices were Jita Buy at time of documentation and are subject to change with the market; does not include skills previously injected for Short Skill Plan)

If you have the Freshman title in EVE University you can reimburse yourself for the cost of these skills by following the instructions on the Skillbook Reimbursement Program page. You can also check in the hangars for the campus you are based in, to see whether they have any of the skill books available.

If you are in EVE University but don't yet have the Freshman title you can still obtain reimbursement for the cost of the skills. You will need to copy and paste the prepared messages (below each shopping list) into the Corp channel so someone with the Freshman title or above can reimburse you from the Skillbook Wallet. Remember to remove from the list any skills you already had trained.

Given the higher price of empire-specific drone specialization skills - newer pilots may want to select 1 or 2 skills to start, based on the tier 2 drone types they plan to use most frequently.

No Skill Plan is being provided for this level of the pyramid as this is where massive divergence and serious investment of training time will need to occur to achieve the desired end state.