Upwell Structures are large player-made structures. They provide services and docking facilities which in many ways mirror those provided by NPC stations, but they differ somewhat in their mechanics. In some respects they are more useful than NPC stations, but on the other hand they can be destroyed.

In high- and low-security space, Upwell structures are useful tools for corporations; in null-security space and even more so in wormholes, they can be essential bases and semi-permanent homes for players.

Much like anything else, Upwell structures are manufactured out of sub-components. Structure components can be either bought from the market, built in stations or in Component Assembly Arrays. The final assembly of the structures can take place in either a station or Equipment Assembly Array. Structure components are distinguished by their usage of a good bit of Planetary Industry materials in their construction.

After construction the structure needs to be taken to the desired location in space and deployed. Certain solar systems are blocked including Trade Hubs, Career Agent Systems, New Player Starter Systems, Shattered Wormholes and Thera. As for placement, the structure must be at least 1,000 KM away from other stations, gates, etc. To fully deploy the structure in an online state, a quantum core, at least one service module, and fuel blocks are required.

The three citadels are Astrahus (medium), Fortizar (large) and Keepstar (extra large). They have exactly same structure bonuses so the difference is only how many things they can have fitted and how much of a status symbol they are.

There is also a special Upwell Palatine Keepstar extra-large citadel. This citadel has ridiculously high material requirements, estimated at around 100 Trillion ISK and only one can be deployed at any given time. As of 2022 no one has anchored a Palatine Keepstar, however the primary structure on the Singularity test server in M-OEE8 -- the combat testing system -- is a Palatine owned by CCP.

The advanced Faction upgraded Fortizars are special edition structures released in limited numbers to capsuleers by the Upwell Consortium as part of their outpost migration project of YC120. During the outpost migration event all Outposts and Conquerable stations were converted into these new faction Fortizars, and after that event no more copies of these structures or their blueprints have been made available to capsuleers. Faction Fortizars still existing in their original spot and never unanchored or destroyed have special unique rigs with enhanced bonuses.

There are 5 types of Faction Fortizars, one for each of the four former outpost types (Null-Sec stations deployed by player alliances), and one for the Immensea conquerable stations.

Moon mining can take place only at refineries anchored within 250 km of a mining beacon and fitted with a Standup Moon Drill I service module, which appears on the outside of the structure as a giant laser turret aimed at the moon. A single cycle takes between 6 and 56 days depending on setup. The steps are as follows:

The three engineering complexes are Raitaru (medium), Azbel (large) and Sotiyo (extra-large). The Raitaru can only build and dock subcapitals. The Azbbel can build up to capitals, but it can only dock subcapitals, so once a built capital leaves, it cannot go back in. The Sotiyo can dock up to capitals, but it can also build supercapitals. However, built supercapitals cannot reenter a Sotiyo after they undock.

As these services require an active module to stay online, the service will go offline if there is not enough fuel. Offline service will pause all manufacturing jobs, stop market activity and lock any clones installed at the structure; the materials and clones that were inside are not destroyed but they can not be recovered unless the service is brought back online. The industry/research jobs can be cancelled but this will not return any of the materials.

Moon mining, reactions and (super)capital manufacturing services are the only ones with restrictions. All others can be installed in any Upwell Structure. The clone bay has additional limitations if fitted in wormhole space. You can not jump into a structure in wormhole space so the clone bay is limited to clone swapping (this includes medical clones). 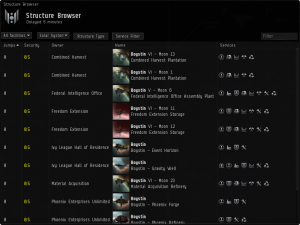 The Structure Browser is able to show you info on structures in same system, same constellation or same region as where you are. It has information about what structures and stations are accessible and what services they offer. You can find the structure browser in the NeoCom under "Utilities" or by hitting the Esc-button and setting up a shortcut for it.