From EVE University Wiki
(Redirected from Asteroids and Ore)
Jump to: navigation, search
This page should be updated due to game changes.
Reason: This page needs to be verified to make sure changes to ore locations are correct. 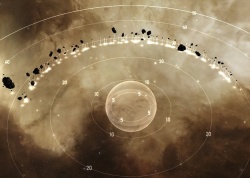 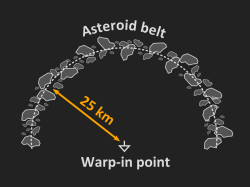 Virtually every star system in EVE (with the notable exception of Jita) has at least one asteroid belt. Most star systems have several -- up to more than a dozen in some cases. These belts are listed on the overview and the right-click menu, and can have two kinds of geometry: one is a rough semicircle of asteroids, approximately 50 km in diameter, the other being asteroids dispersed over a spherical volume with a radius of about 70 km. A ship warping to an asteroid belt's beacon (through the right-click menu or the overview) will warp to the center of the asteroids. Note that mining lasers have an (unboosted) range of only 10-15 km, so in order to mine asteroids a ship has to fly closer to the belt after warping in. If you want to save on travel time, you can warp to mining bookmarks instead.

A given belt will have a mixture of asteroids containing different ores. The mixture and size of the asteroids (i.e. how much ore each asteroid contains) is determined by the system's location in the EVE universe and its security status (see asteroid distribution below). Each asteroid belt contains a finite number of asteroids (which disappear once fully mined), but the asteroids respawn after downtime if there are no asteroids left. The website Dotlan has maps showing the number of belts per system.

Mineable asteroids can also spawn in deadspace pockets, such as the ones created for missions. Unlike asteroid belts, these are not organized into a set shape. Some are composed of dense clumps of asteroids, while others are scattered fields. For a list of which missions' deadspace pockets contain asteroids, see Mission mining or EVE-survival.

The following chart illustrates the makeup of cosmic anomalies. "Small", "Average" and "Large" are defined above:

There are no ore anomalies in high security space.

With the creation of Pochven, new ore types were added to the game which can only be found in these areas. Bezdnacine, Rakovene, and Talassonite are the new ores, while Spodumain and Mercoxit can also be found there, with Mercoxit only spawning in home systems. 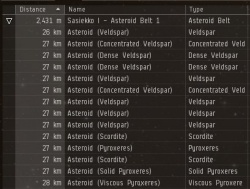