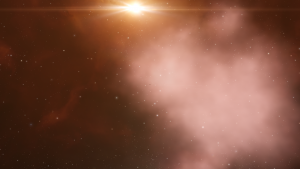 Flame Nebula is a gas site found in the region of Heimatar and Derelik. It's used in a reaction for creating Synth X-Instinct. Exploration - Gas cloud harvesting

Originally thought to be little more than a picturesque deviation from the monotonous emptiness of space, scientists and unscrupulous entrepreneurs alike have begun to appreciate the various gas cloud formations that have been discovered in recent years. Initial research into the properties of the gaseous phenomena revealed that when it came to facilitating the growth of certain types of crystal, they were one of the most conducive environments in the entire cluster.

At first the crystal byproducts were viewed as a potential military innovation, offering slightly improved cost efficiency in electronics and weapons manufacture. When their massive potential for use in booster production was discovered however, viewpoints shifted dramatically, and nowadays they are coveted as a fundamental resource driving the burgeoning booster industry.