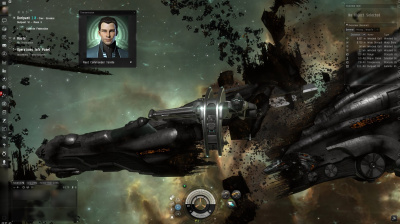 The EVE tutorial (also known as the "New Player Experience", or "Inception") is a story-driven experience which introduces you to the very basics of playing EVE and to the EVE universe. Unless you've already played EVE it's highly recommended that you follow the tutorial, as the game has many particular mechanics which you may not be used to, even if you've played other computer games. The tutorial is available to any brand-new character.

You start the tutorial in space in a corvette, the sole survivor of an attack on your fleet by Drifters. Through voiceovers, the game will introduce you to the basic concepts you need to play EVE. The tutorial gives you step-by-step instructions, you should follow them carefully. However, the tutorial is often a bit light on context (while it may tell you to do something, it often doesn't explain why or when you might normally want to do this). Therfore, if you'd like to know more about what the tutorial asks you to do, follow the list below, and/or click on the links for an even more in-depth explanation of the concepts covered by the tutorial.

For a more general guide to getting started in the game, see Getting Started in EVE Online.

Any friendly on grid in the final suicide mission will get killed and podded!

Topics covered by the tutorial