Each epic mission arc is a special series of missions tied together in a dramatic story. These are often more difficult than standard missions of "equivalent" level, but have better narrative and often better rewards. The last mission in each arc gives a significant faction standing boost - with no derived standings changes to other factions - and may also award a valuable item. Each epic arc has at least one branch point where your decision of how to continue will affect both the story and your rewards.

The epic arcs can involve a lot of travel, but many of the missions can be accepted and/or completed remotely to reduce travel time. Epic arc missions do not expire, and each arc can be repeated every three months.

"Penumbra" is the Caldari epic arc and as all epic arcs it follows a story that covers some inner dealings of its faction. You are initially hired by an agent of Nugoeihuvi, one of the seven megacorps that run the Caldari State. During the arc you will witness and participate in the power struggle between these megacorps and have the option to defect to the Hyasyoda megacorp.

"In the heartland of State space, inter-corporate tensions come to the fore as Nugoeihuvi makes a move for some quick ISK, and you must choose who to trust and who to betray. The moral ambiguity continues through to the end, as the player begins to unravel an even darker side to corporate self-interest and the ongoing conflict in Black Rise."

To start the Epic Arc you must have a standing of 5.0 or higher with Expert Distribution or the Caldari Faction.

These missions have great rewards, but do require some advanced skills and ships to complete safely. Recommended:

Penumbra is started by speaking with Aursa Kunivuri, at the Nugoeihuvi Information Center in Josameto ("Beacons" and "Agents in Space" must be visible on the overview). This requires 5.00 standing or higher with either Caldari State faction or Expert Distribution corporation. The agent will not speak to you if you are in the alpha clone state.

The missions in this epic arc are generally short. All the combat missions can be blized by only completing the single given objective. The epic arc requires you to do at least one hauling mission to either low or null security space.

There are also multiple branching missions so you won't need to complete all the missions listed here. 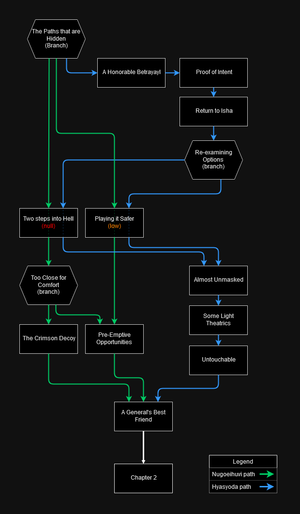 The branching nature of the first chapter. (click to enlarge)

Your choice in mission "Paths That Are Hidden" leads you to either Hyasyoda or Nugoehuvi path blocking the reward from the other corporation. In final chapter both these paths offer Caldari State path as third option.

The Hyasyoda path rewards you with:

The Nugoehuvi rewards you with:

The Caldari State path rewards you with