Jump clones are a technology used by players to transfer their consciousnesses from one body to another. Jump clones should not be confused with the Medical Clone that is stored in a player's home station.

Your medical clone is the new body that you wake up in should your capsule get destroyed for any reason. You only have one medical clone, but in addition to your medical clone, and depending on your skills, you may have up to ten jump clones. These will be located in places that you choose, and you can activate them whenever you wish.

An animated guide to how jump clones work (click to see animation).‎

You can only have one active "body", but by using clones, your body can jump from system to system regardless of the distance. In game terms, when you jump from one body to another, you take your skill points, standings, corporation membership, and cerebral accelerators with you. However, you cannot take any items with you, including implants - these remain with your old body. In effect, your old body turns into a new inactive jump clone - you can jump back into it later.

In order to create or use jump clones, you need at least one level in the skill Infomorph Psychology. Jump clones are purchased and installed at Clone Bay facilities in NPC stations for a moderate fee. Once you have installed a jump clone, it will continue to exist until you destroy it.

Not all stations have medical facilities, and there are a number of other locations that can create jump clones. You may install jump clones on board capital ships with Clone Vat Bays fitted (Titans and Rorquals), or in player-owned outposts in sovereign nullsec space and Citadels fitted with a Stand Up Cloning Center (fees may be set by the owner via standings).

Once you have a jump clone installed, you can activate it from your character sheet after exiting your ship. Jumping is instantaneous, but you must wait at least 24 hours between clone jumps (training Infomorph Synchronizing decreases this delay by 1 hour per skill level). 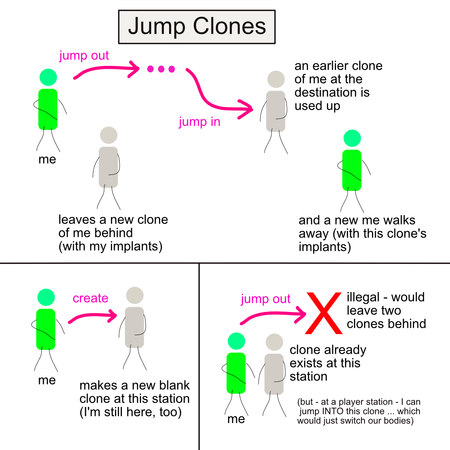 There are three main advantages to using jump clones:

Make sure that you meet the prerequisites:

Your map will highlight all the systems with clone bays, hovering over the system will tell you exactly which station.

You can also look for clone bays in citadels which are often cheaper than stations but you can lose access to them (see below):

The list will update with all the nearby structures with clone bays. The "Jump Clone Installation" column will show the installation fee for NPC structures.

The jump clone window (accessed from the character screen).

You can repeat this procedure as often as you'd like to create additional jump clones, with two restrictions:

Once you have installed/bought a jump clone, it is yours forever. Additionally, if you get podded, you will find yourself at your home station (the station where you last installed your medical clone), while all your inactive jump clones will still be available (although you will lose any implants that were installed in your active clone in the moment you were podded). This new clone you find yourself in is essentially now the jump clone you were just podded in, less any implants.

There are, however, three cases which would destroy one of your jump clones:

You can also destroy any jump clone you via the Jump Clone tab on your character sheet. This can be handy for freeing up a jump clone slot to then be able to install a new one at your current location, especially if the other jump clone was clean, and you don't need to have a clone at that location anymore.

Before Citadels existed, it was the case that if you had a jump clone somewhere, you could always jump to it (cool-down timer permitting). In particular, in Sov Null, if you left a jump clone in a station/outpost when you lost sov and evacuated, you could later jump back there, even if you no longer had docking (or any other) rights in that station/outpost.

However, Clone bays in Citadels are controlled by Access Lists, and if the owner of the Citadel changes them so that you have no access to the Clone Bay, then even if you have a jump clone in that Citadel, game mechanics will prevent you from jumping into it.

Also note that if a citadel moves into it's hull vulnerability timer or is low power mode, the clone bay will offline. This therefore means that the jump clone will still exist but you will not be able to jump to it while the structure is in this state.

Suppose you have the following clones:

Suppose that you fly your character from Dodixie to Rens. You will now have an active clone and an inactive jump clone in Rens.

If you try to install a second jump clone in Rens, the game will refuse to install it. You will not lose anything.

If you tried to jump clone from Rens to Jita, you would have ended up with two inactive jump clones in Rens, which is not allowed. The game will warn you not to do this and allow you to cancel; if you ignore the warning and clone jump nonetheless, your inactive clone in Rens (with a willpower implant) will be destroyed, but you will keep the inactive clone containing the perception implant.

At any time, if you are podded, you will wake up in Jita, at which point you will have an active clone and an inactive jump clone, both in Jita.

The Clone Vat Bay is a high-slot module which can only be fitted to the Rorqual Capital Industrial Ship or Titan class vessels. The skill Cloning Facility Operation to at least level I is required for operation.

Clones are stored in an invisible part of the ship and are not destroyed if the Clone Vat Bay is unfitted, however if the host vessel is destroyed then the clones installed are lost. Clones are visible to the host vessel with the "Configure Clone Facility" option in the capacitor doughnut, which lists the pilots with clones installed, the available clone space remaining and the option to invite or destroy a clone from another pilot. Only one clone can be installed per host vessel per pilot.

Let's assume a Titan pilot in an Avatar and another pilot who is currently in a Scythe Fleet Issue cruiser. First, the Titan pilot must fit the Clone Vat Bay and have it online, and he must have sufficient Liquid Ozone in the fuel bay, since the CVB uses 1 unit of Liquid Ozone per activation. Next, he must activate the clone bay, which, given the fact that it immobilizes the Titan and has a 5 minute cycle time, requires the usual safety precautions. (Tethering is not broken when activating a Clone Vat Bay.)

Clone Vat Bays are rarely used in the current metagame, although they can offer a specific advantage or utility in extremely specific circumstances. Titan Bridges are more effective means of transport to the battle field over remote distances.