Blood Hidden Hideaway is an unrated combat site belonging to the Blood Raiders pirate faction. It can be found via exploration as a cosmic anomaly within systems owned by the Amarr Empire and Ammatar Mandate. As an ungated complex, the limitations as to which ships can complete this site are tied to the security rating of the system where the anomaly spawns (T2 Battleships for high-security systems, and up to Titans in low-security and null-security systems). 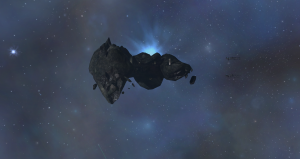 Single ungated area in space. Can be warped to at any range.