Serpentis Phi-Outpost is a DED Rated combat site belonging to the Serpentis Corporation pirate faction. It can be found via exploration by scanning anomalies in high security and low security systems. Battlecruisers (and their Tech 2 equivalents) are the maximum ship class allowed to enter the site. Completing this complex may award the player with valuable Corelum C-type and Shadow Serpentis faction modules. 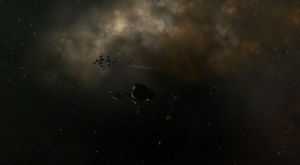 The electronically sealed container is unlocked after certain ships have been destroyed. The acceleration gate requires the stolen passkey to get through. The key is found in the sealed container and is consumed on use.

Note: The site has been known to despawn all NPCs except for the Phi-Operation Protector. 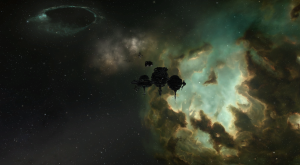 The Phi-Operation Protector battleship has a microwarpdrive, and will use it to close in on targets. On paper, its MWD can bring it up to 1000m/s, however in practice it usually will not exceed 850m/s. Its weapons are ineffective beyond around 30km, so if it can be outrun it should not be a major threat. Significantly, this battleship's armor has very high Kinetic resistance (80%) and it will actively repair itself. Its lowest resistance is Thermal (50%), which should be the damage used to kill it.

Spawns in a few seconds

Stats of the overseer battleship