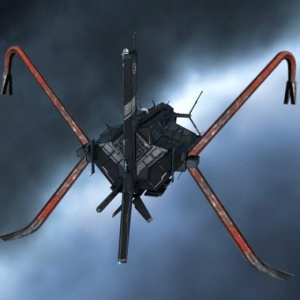 Artist rendedition of a Crowbar Griffin

A Crowbar is a quick-response ECM ("jamming") ship designed to be used in case of an emergency to "pry" a more valuable ship out of a sticky situation. It is a specific fitting of the Tech I Caldari frigate, the Griffin. The fit is designed to be newbro-friendly (low skill requirements) and cheap (easy to afford and essentially disposable).

The rockets / launchers are primarily to help clear drones targetting you (see Tactics, below) but may be omitted to reduce ship costs, if necessary.

The pilot calling for help should specify by what race/type of ship he is tackled, so crowbar pilots can refit into the appropriate jammers before undocking:

If no ship or race is specified (or if there are multiple types of aggressors), it is advised to fit one of each type of jammer, as shown in the fit above. This configuration is known as 'rainbow jammer' because they have all the colors of the respective jammer types.

In any case, the 12 additional ECM modules in cargo should be left in station, in case the Crowbar is destroyed.

How to get one

A doctrine-fitted Crowbar costs approximately 1.5M ISK. If you can afford to have your own, they are usually available on corporate contract in the various campus home stations. It's a good idea to have one (or more) available in each campus you frequent.

In emergencies, if you need one, they may also be borrowed from the campus hangars. (If you don't have the required title to access a specific hangar, ask someone else in the campus for assistance.) If you lose your Crowbar in a QRF action, it should be eligible for reimbursement through the Ship Replacement Program.

When and how to call for Crowbars

Before calling for Crowbars a pilot should assess the questions below:

If the answer to all of these questions are "Yes," then a pilot can consider calling for Crowbars.

After a pilot determines that calling for crowbars is justified he should relay at least following information:

Your jammers should be put on the tackling ship(s). Make sure you use the appropriate jammer type on each ship if more ships are present.

Your rockets are close range weapons, mostly aimed at clearing hostile drones that are targetting you.