Capacitor warfare describes the use of various offensive modules or drones to disable hostile player ships by draining their capacitor, thereby rendering them unable to use modules which rely on capacitor to function. Modules that drain capacitor are known as "energy weapons" (not to be confused with energy turrets, the Amarr racial turret weapon) and are affected by

Many players have probably heard the phrase "cap is life" during their time in New Eden. There are many reasons why this is true, and each one is also a reason why capacitor warfare can be effective. Capacitor is necessary for maintaining active tanks, directly feeds energy and hybrid turrets, and fully powers offensive mid slot modules, including all electronic warfare modules and propulsion systems. Thus, an enemy without capacitor is an enemy with few options, which means ships with capacitor warfare capabilities often dictate the flow of the battle.

While capacitor warfare is technically a type of electronic warfare, it is generally discussed separately due to how much it differs from the more well-known forms. Capacitor warfare has bee rebalanced several times in the history of EVE, and has experienced periods of being extremely powerful and comparatively weak. Regardless of its relative power, however, it is a viable tactic that can be used to great effect when used properly. 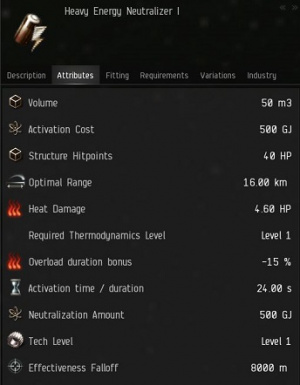 Capacitor warfare can be accomplished in a few ways:

All capacitor warfare systems affect the target's capacitor in the same way, removing a given amount of capacitor each cycle, "damaging" the capacitor in much the same way that conventional weapons damage hit points. This effect can be mitigated by neutralizer resistance granted by some modules.

Capacitor warfare modules are very different from the more well-known EWAR modules. Energy Neutralizers and Nosferatu are high slot modules with a very short range compared to conventional weaponry. When used on ships with bonuses to energy weapon range or strength, they can even serve as the ship's primary weapon system, often taking the place of turrets or missiles that could otherwise be fitted. They are also often fitted in utility high slots (high slots beyond the number of allowed turrets or launchers) to supplement combat effectiveness or aid capacitor stability. Because they do not deal any damage to hit points, ships using energy weapons often utilize drones to deal damage.

Capacitor warfare drones are substantially weaker than all but the smallest Energy Neutralizers, and operate in the same manner as other drones. They are rarely used due to their limited effectiveness, but are sometimes deployed by ships heavily specialized in capacitor warfare as part of a fleet, when the neutralizing ship has backup to deal damage.

Like most systems in EVE, capacitor warfare has setups against which it is inherently limited. Projectile turrets do not require capacitor to operate, and passive shield tanks continue to function without capacitor expenditure. When capacitor warfare is anticipated, pilots will often place more emphasis on heavy buffer tanks, which increases their survival time enough to possibly either destroy the neutralizer or call for reinforcements. With that said, capacitor is involved in every engagement – PvE or PvP – and thus capacitor warfare can threaten the capabilities of every ship in the game, whether through disabling weapons, support modules, or even warping to escape.

Since capacitor warfare deals in the removal of capacitor it works in opposition to the recharge rate. Since the recharge rate is lowest at 100% and 0%, capacitor warfare will have the greatest relative effect at these levels. Capacitors recharge continuously over time, while energy weapons remove capacitor in chunks at the end of the weapon cycle. Energy weapons removed a base amount of capacitor per cycle, but their effectiveness is often also expressed in GJ/sec to facilitate easier comparison to the target's recharge rate. Capacitor warfare will have the smallest relative effect at peak recharge, as the amount of capacitor removed will be countered by the highest recharge rate the target's capacitor is capable of. Thus, it is often more difficult to "cap out" a target than it is to keep them capped out, i.e. it may require three neuts on a target to drain their capacitor as quickly as possible, but once fully depleted only one may be required to keep their capacitor empty. Because of this, it is recommended that ships utilizing cap boosters us charges that will bring their capacitor to 25%, so that maximum recharge is reached after each booster cycle.

The goal of capacitor warfare is to use enough neutralization to overcome the peak recharge rate of the target's capacitor. If a ship removes less then that amount, it will make it more difficult for the target ship to be cap stable, but if this is the case then it may be more effective to switch the energy weapon(s) for a different module. The basic rule of thumb is that a good capacitor warfare setup has a neutralization rate much higher than any conceivable recharge rate.

All neutralizers have a similar set of attributes. The different sizes of neutralizer differ significantly, but for each size tier they are fairly consistent across meta levels. Aside from fitting considerations, the only attributes that change from meta 0 all the way to commander modules is the range and the amount of energy neutralized.

Falloff works by reducing the effectiveness of the module when in falloff range. The formula is the same as gun falloff:

All nosferatus have a similar set of attributes. The different sizes of nosteratus differ significantly, but for each size tier they are fairly consistent across meta levels. Aside from fitting consideration, the only attributes that change from meta 0 all the way to commander modules is the range and the amount of energy transferred to the user.

Falloff works by reducing the effectiveness of the module when in falloff range. The formula is the same as gun and neut falloff:

When within range of a target, and the target's capacitor amount (not percentage) is higher than your cap amount, then an activated Nosferatu acts much like a neut. The difference is that the transfer amount is added to the user's capacitor and removed from the target's capacitor. A nos will stay activated as long as the target is in range and pull cap when the cap level condition is met, so there is no downside to keeping a Nosferatu activated at all times. The primary caveat to using Nosferatu is that a nos is highly likely to be effective when fighting bigger targets, but not likely to work when fighting smaller targets.

A Nos is easier to effectively employ in a gang situation with multiple targets. While neuting the main target, a pilot can nos an alternative target (ideally a bigger ship) to maintain the Nosferatu's effectiveness. Properly employed, this synergy between neuts and nos is extremely effective.

Cycle times are identical (6 seconds) for all three sizes of drones. The amount neutralized is easy to remember, as it is identical to the drone bandwidth: 5 GJ for Light, 10 GJ for Medium, and 25 GJ for Heavy drones. Like all other drone-based EWAR, pilot EWAR skills have no effect on the drones. There are no stacking penalties when using Neutralizer Drones.

All the supporting capacitor management skills as listed in Capacitor Management 101 will assist in getting pilots through a fight with more capacitor available for capacitor warfare. Depending on preference, ship types and fits, the relative importance of each skill will change, but each can be considered a good investment of SP.

Capacitor Emission Systems. The complete high-grade set (slots 1-6) will have an overall effect of -38.12% cycle time. This is of course a huge increase in the amount of GJ/sec drained. A max skill Curse with a full Talisman set will neutralize 40.4 GJ per sec with a single meta 4+ medium neut.

In addition, the following hardwirings are worth considering in addition to or in place of the Talisman set:

When approaching boosters from a capacitor warfare perspective, Mindflood is the drug of choice. This booster increases capacitor by a percentage that stacks on top of all other modifiers without stacking penalty.

The potential side effects are:

Pilgrim, the impact of these possible effects is usually minimal, as DPS usually comes from drones and many popular fits are buffer tanked only. The worst penalty is potentially the armor repair amount for a solo fit Sentinel or Pilgrim, although there are Curse fits that use missile launchers to up DPS.

Blood Raider ships using lasers and cap warfare mods may have more of a trade-off to consider. Individual pilots will have different risk assessments, but once the applicable skills have been trained (

Neurotoxin Recovery), the risk and impact of side effects can be greatly reduced.

The Egress Port Maximizer rigs decrease the capacitor use of all energy weapon modules. The Tech I rig reduces activation cost by 15%, and the Tech II by 20%. More than one rig can be used, but because of stacking penalties, the effects get lower as more rigs are added.

Energy Neutralizers have no effect on NPCs, and they never run out of capacitor, so ships fit for PvE should never be fit with Energy Neutralizers. It is possible to drain capacitor from NPCs using an Energy Nosferatu, but there are reports that there is a limit to the total amount of capacitor that can be drained from a single NPC. Energy Nosferatu will always successfully drain capacitor when used against an NPC, no matter what its size.

The use of capacitor warfare in PvE is not common, and not much has been published on the matter. It has been reported that the use of Neutralizers, neutralizing drones, or nos on NPCs will result in a chance of disrupting both shield or armor repairing by the NPC. The chance of disrupting repairs seem to increase with the size of the modules and decrease with the size of the NPC ship. So using a heavy neut on a frigate NPC should have a very high chance of stopping any repairs. Likewise using a small nos on a battleship NPC will have little to no effect on stopping repairs.

The following ships have some bonus related to Energy Neutralizers and Energy Nosferatu for range or drain amount:

Blood Raider ships also have a unique role bonus that allows fitted Energy Nosferatu to successfully drain capacitor regardless of the target's capacitor level, thereby allowing them to remain effective at using Nosferatu against smaller targets.

A number of ships fitted for cap warfare are not bonused for it. The

Prophecy are well known examples of ships with no bonus to cap warfare range or transfer amount which have been used with great effect. While any ship could conceivably be fitted with a neutralizer or a nos, the following elements help make an unbonused ship suitable for cap warfare:

Capacitor Batteries reduce capacitor drain and neutralization amounts as shown by the Capacitor Warfare Resistance attribute on such modules. The resistance from multiple fitted capacitor batteries does stack.