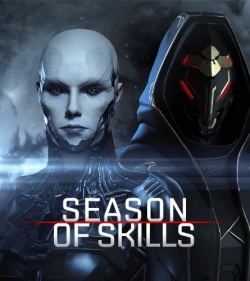 Launcher Banner Image. This event was announced amidst invasions of New Eden by the Drifters (left) and Triglavians (right).

The Season of Skills was a set of events, announced on 15 July 2019 by CCP[1]. It was composed of a subscription promotion, two login Skill Point (SP) events, and a month-long event where capsuleers will be able to kill NPCs for SP. They are separated into their own sections below.

At the time this event took place, New Eden was enduring attacks from the Triglavian Invasion in Hisec, and Drifter attacks leading to a blackout of Local chat in Nullsec[2] [3].

Summer is here (unless you live in Iceland) and the time has never been better to take a look at your skill plan, decide what you want to specialize in and start planning for the future. This is especially true right now given the unpredictable nature of New Eden.

As part of a series of events that we'll be running over the Summer months, we're now offering pilots the chance to grab three months of Multiple Character Training for just $1 / €1 / £1 / RUB 29 when you buy 3 months of omega time.[4]

Similar to other subscription bundle bonuses that CCP had done in the past, people were able to purchase 3 months of Omega alongside 3 months of Multiple Character Training. The MCT required a small surcharge to get. Purchasing this bundle directly added 3 months of MCT to the account that Omega was purchased for, rather than in the form of Multiple Pilot Training Licenses. 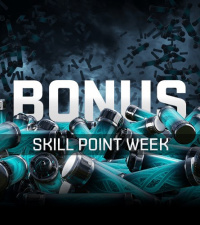 8 days were given to collect 7 days of login bonuses. Similar to past login events, There are Alpha and Omega reward chains, with accounts in the Omega state being able to claim both.

The rewards per day are as follows:

The Standard 'Canicule' Cerebral Accelerator is the normal +10 booster to all learning stats for 86,400 seconds, or 1 day, as seen in previous limited time events. This means the accelerator give 21,600 SP with no

Biology levels, and 43,200 with Biology V to an Omega clone character.

The Extended 'Canicule' Cerebral Accelerator is the normal +10 booster to all learning stats for 259,200 seconds, or 3 days. This means the accelerator can give anywhere from 64,800 to 129,600 SP for Omega clones based on Biology level.

This means that the event can provide up to 801,200 SP for Omega pilots. 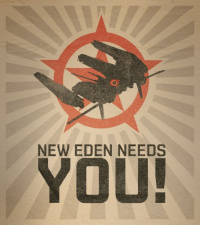 Answer CONCORD's call to arms by fighting the Triglavians and various other foes. Gain as many Skill Points as you can during the Skilling Spree between 24 July and 21 August for destroying any NPC in New Eden! Get rewards ranging from 10,000 Skill Points for one kill, to the rarer 50,000 Skill Points for more kills per challenge. Then, use those Skill Points to train essential skills for piloting bigger, better ships with advanced weaponry.

Capsuleers received one of three challenges every day over the duration of the event, all of which reward SP for killing a certain number of NPCs. [5]

During the Skilling Spree, promotional competitions were run for recording the fastest skilling spree rat kill for a certain class of ship. Competitors had to submit their video via Twitter or email.

The categories were as follows:

The top 3 submissions and an honorable mention for each Stage will receive an SP reward. These will be announced on the 26th of August.

The SP spread over the 3 days was as follows:

With all of these related events giving Skill Points in one way or another, CCP recommended on the event page that new capsuleers train the Magic 14 set of universal ship skills, particularly if they aren't sure what they want to specialize in.