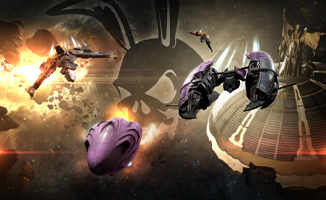 The Hunt is an ingame Easter event that runs from March 30th to April 13th. It consists of 3 parts: an "egg" hunt, a combat site, and a data hacking site.

Note that activating the gate will consume a key regardless whether you manage to jump or not. The gates can be activated multiple times consuming multiple keys and the gates do not stay unlocked.

The event rewards points for completing any of three types of activities.

The agency points will reward ship SKINs. These SKINs are applied directly and can't be traded.

Colorful Mysterious Capsules spawn all around New Eden. These capsules are located on random celestials such as planets, moons, asteroid belts and stars. They do not stay in place and will warp to another celestial from time to time. They fall under the category of "Irregular Capsule" in overview settings.

The key is needed for accessing the final room in Guristas Hunt Outpost and Guristas Secure Storage data sites.

Guristas Hunt Outpost sites can appear everywhere in New Eden. The site appears as a combat anomaly in the probe scanner window. Once warp to the site is initiated the site will also appear as a beacon in the overview, revealing to everyone that someone has warped to it.

Only T1, T2, and faction frigates and destroyers can enter the site.

The site consists of two deadspace pockets, both behind acceleration gates.

Accessing the final room requires a Hunt Acceleration Gate Key. The gate does not stay open for other people for 10 seconds after activation like other locked gates do. So everyone who wants to enter the final room needs their own key.

The site can be completed in a destroyer tanked against kinetic/thermal damage.

But take care, all frigates warp disrupt/scramble, web and neut, as will the Automated Drone in last room too. In the first room, there are NPCs that deal damage aside from kinetic and thermal. Hunt Griffin deals Explosive damage and ECM, Hunt Kestrel deals EM damages, Hunt Blackbird deals massive explosive damage and ECM, Hunt Caracal deals massive EM damage. The 'Hunt' rats have rather poor loot tables so don't bother looting.

The rats are weakest against EM and thermal damage. Kinetic damage is almost as good but explosive damage is not very good against them.

You face a single boss rat in this room(Guristas Automated VHF-08 or VHF-21).

(During the first days the last NPC sometimes dropped Dread Gurista Modules and Ammo. This seems to be patched out now.)

Guristas Huntmaster Outpost was the harder event site that spawned only in Caldari low security space and in Venal. The site structure was identical to the Guristas Hunt Outpost but with a higher number of more powerful rats.

In addition to the same rewards as the easier Hunt Outpost, the Huntmaster Outpost had a chance to drop Guristas Hydra implants.

This site must be scanned downed like any other signature. It appears as a level 3 data site. Warping to the site takes you to a gate which requires a Hunt Acceleration Gate Key to activate.

The pocket contains 6 Guristas Com Towers, which contain a mix of regular data site loot and The Hunt loot. The nodes are green, with 70 health and 10 damage.

There are no hostiles in this site. The Guristas structures in the pocket cannot be attacked.