From EVE University Wiki
(Redirected from Assault Frigates)
Jump to: navigation, search
This page should be updated due to game changes.
Reason: #Empire Faction Frigates needs to be updated because of the new Version 20.08 faction frigates. 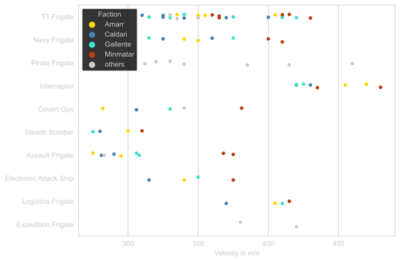 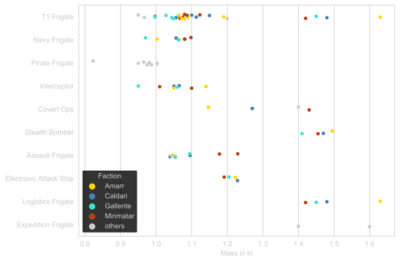 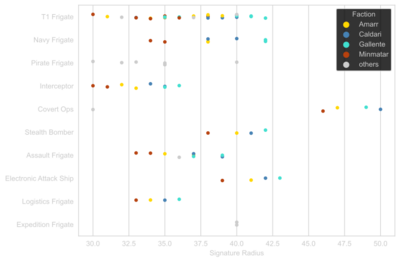 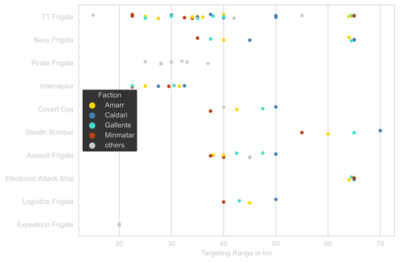 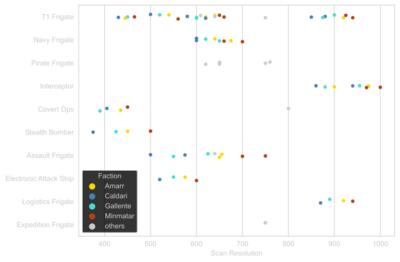 Frigates are the smallest and fastest ships in EVE. New pilots begin by flying frigates, and the Tech 1 frigates only cost a few hundred thousand ISK. Don't be fooled by the low cost of frigates and the fact that they're used by novice pilots, though: frigates can play an important role in battle, and in numbers or with skilled pilots even Tech 1 frigates can be deadly.

There are a number of classes of Tech 2 frigates, which have advanced abilities and are also much more focused on a particular role: tackling interceptors, cloaking and scanning covert ops frigates, surprise-attack stealth bombers, electronic attack frigates for electronic warfare, and assault frigates, which are designed purely to deal and survive damage.

Besides shuttles and rookie ships, each race has around six frigates which can be sorted by their roles. One is a logistics frigate, which has bonuses to tools that help repair other ships, but is very weak in combat. Then there are two combat frigates, which have a great variety of specializations and differences, though all races have at least one frigate which focuses on turrets. One further frigate uses electronic warfare. Each race's frigate lineup is completed by an unusually fast and nimble scouting/tackle frigate, and an exploration frigate with a scanning bonus which helps it to use probes to locate PvE exploration sites or PvP enemies.

In fleet PvP Tech 1 frigates are generally used for tackling or electronic warfare, two roles in which they can have a significant impact. Tech 1 frigates are also flown for solo PvP: their speed and small size helps solo pilots to pick their targets, and their low cost makes them comfortably expendable.

In PvE the more combat-focused frigates are used to complete Level 1 missions, though once new pilots are a little wealthier and better-trained they often begin to use [destroyer]]s instead.

Finally, there is the ORE mining frigate, the Venture, dedicated to collecting minerals and gas.

Electronic warfare frigates all have bonuses to EW modules, such as the Target Painter, ECM modules, Remote Sensor Damper, and Tracking Disruptor. These ships operate at much longer ranges than other frigates, and rely on positioning and speed to survive as their shield and armor will collapse in a heartbeat. In a small pack, and with some support ships to deal damage, they can be formidable.

Geared toward exploration and scanning, the 'Exploration' class of T1 Frigates all have bonuses to aid in scanning and hacking. Fitted with a Core Probe launcher, they can make a good cheap alternative to the Tech 2 Covert Ops variants. All can field a few drones, but are by no means combat worthy.

Fast frigates, sometimes referred to as 'tackle frigates', are built to align and reach their top speed quickly. Although their base speed, agility, and scan resolution would seem to make them good all-round PvP ships, their lack of slots and low fittings make them worse for that role compared to some other frigates.

Damage dealer frigates (or 'combat frigates') are split into two sub-categories, with each race getting one ship of each type: ones with defensive bonuses, and ones with purely offensive bonuses. In general, they tend to have the ability to take a little more damage than their counterparts and deal out a little more damage in return, but they are not much of a match for a larger ship when alone.

The logistics frigates have bonuses to small logistics modules, and can support small ship fleets. These hulls were originally meant for mining, but were repurposed with the release of the Venture.

There is a single T1 mining frigate, the Venture. It possess a large mining hold of 5000m3 and strong bonuses to mining and gas yield while staying surprisingly cheap and easy to acquire for new players. The drone bay of 10m3 isn't huge, but can hold 2 mining or defensive combat drones of choice. Its built in warp core stabilizers make it somewhat safe against unprepared attackers, though it won't survive long against concentrated firepower, and it is not allowed to enter complexes in Faction warfare.

The combat faction frigates don't have a T1 counterpart and have large bonuses to the factions main weapon system. All are among the best tech 1 frigates for 1v1 fighting and operate like greatly upgraded (but more expensive) versions of other tech 1 frigates. They are thus very popular in Lowsec.

The EWAR faction frigates are based on the empire's T1 EWAR frigate. They have an EWAR bonus corresponding to their empire, a weapon bonus, and improved base stats. These makes them more viable as solo PvP ships compared to the T1 EWAR frigates.

Pirate faction frigates cover a wide range of specialisations. They all gain bonuses from two empire frigate skills. Their blueprint copies can drop from certain NPCs or be obtained through the factions LP.

Tech 2 ships are in general specialised versions of T1 ships. Tech 2 frigates are no exception in this regard. You need the frigate skill of the corresponding faction at five to fly a T2 frigate and of course its specialisation skill. This makes them significantly more skill intensive than T1 ships but if you choose only one hull you can still train into it reasonably fast. So, if you enjoy flying a certain T1 hull very much you might consider to train into the corresponding T2 hull.

These are basically frigate-sized version of the combat recon ships, but their proportion of usefulness to cost varies from ship to ship. Each race's electronic attack frigate is based on the hull of that race's Tech 1 electronic warfare frigate.

Interceptors ("'ceptors", "inties") are the fastest of fast tackle frigates. They feature very high warp speeds, flight speeds, and agility, and low signature radii, but somewhat thin defenses. They are commonly used as scouts and initial tackle. However, their straight combat abilities are limited (and often nonexistant).

Fleet interceptors have a bonus to Warp Scrambler and Warp Disruptor range. Furthermore, they can fit the Interdiction Nullification module, allowing them to ignore the effects of warp disruption bubbles.

Combat interceptors use turret weapons and feature a bonus to prop mod Overheat effects. They don't have the range bonuses of fleet interceptors, but they have significantly more damage potential. Unfortunately, their damage and durability are far below those of an Assault Frigate, and so they are not commonly fielded.

The Covert Ops class is split into two sub classes with significantly different roles, both of which have the ability to warp while cloaked.

Covert Ops frigates can warp while cloaked, and have bonuses to scanning and hacking. As scouts they can stealthily gather intelligence and use their scanning bonus to probe out enemy targets. They can watch enemy targets while in cloak and provide a warp coordinate for a much larger gang of heavy hitting ships in an organized surprise attack. Explorers can use the same scanning bonus to probe down PvE exploration sites. Due to their extreme fragility, cov-ops frigates should not generally be used in a tackling role, and are typically invisible at all times. In E-Uni Covert Ops are mainly used as a forward scout or rear scout.

Stealth bombers are very specialized ships which can warp cloaked and don't have a sensor recalibration delay preventing them from locking targets after decloaking. They can fit torpedo launchers (battleship sized missile launchers) and bomb launchers, which fire area-of-effect weapons that can only be used in nullsec or wormhole space. Stealth bombers put out extraordinary alpha strike damage and die very fast if anyone manages to put some damage on them, so bomber pilots will typically fire a few salvos and/or a single bomb then recloak. They are the bane of large ships, especially in nullsec. In groups and flown well, stealth bombers can take down a capital ship.

Each stealth bomber has a damage bonus for bombs and torpedoes which do its empire's associated damage type.

Assault Frigates are no-nonsense combat frigates that offer either high durability, high damage, or both; and as they are still frigates, they are often very difficult to hit. When used as tackle ships, they do not have the same speed or range as a true Interceptor and so their tackle tends to be more death-or-glory, all-or-nothing; but their durability can shine through and they can hold their target tackled for an irritatingly long time. When used alternatively as defensive anti-support ships, or as mainline damage ships, their durability takes a backseat and their high potential damage shines, and allows them to either quickly destroy small targets or punch up with surprising force.

To aid their evasion, Assault Frigates suffer less from the signature penalties of microwarpdrives. To aid their survival, Assault Frigate benefit from full strength (75%/50%) T2 Resists, and can use the Assault Damage Control module, an alternative to the regular Damage Control which provides lower passive resistances but can be activated once every 2.5 minutes to provide around 12-14 seconds of near-invulnerability.

Assault Frigates are most commonly used in PVP, however in PvE contexts, assault frigates can quickly take on missions and combat sites which would normally be far too difficult for a frigate-sized ship.

Both assault frigates of each race are based on the hull of that race's primary Tech 1 combat frigate (the Punisher, Merlin, Incursus or Rifter), and again are split into two sub classes, those with damage dealing bonuses, and those with tanking bonuses. (Both Caldari assault frigates have defensive bonuses; while neither Gallente assault frigate has one.) Each of the two variants also is built around a different weapons system.

Logistics Frigates have substantial bonuses to logistics module use, and are designed to support small ship fleets where a cruiser's slower warp speed would slow down the roam.

Expedition frigates are resource gathering ships designed to operate in more hostile environments than larger mining ships. They have bonuses to fitting cloaking devices, and generally are specialized towards one type of resource gathering.