A ship or spaceship in EVE Online is an entity used to traverse space, battle enemy forces, ferry materials and products, provide logistical services along with many other uses. A ship may be piloted by a capsuleer (player) or non-player characters such as CONCORD, faction militaries, civilian industrialists, outlawed paramilitary and pirate forces.

Ships accelerate by using their engines, almost always located at the stern of the ship. They cannot travel at near-lightspeeds without the use of warp drives. Initiating warp requires an object with mass or feigned mass. The ship will acquire this object as a target and use a warp drive in conjunction with sub-lightspeed thrusters to accelerate through a warp tunnel. 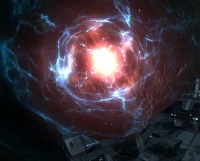 "Military experts are calling this a cynosural field." -Journalist during the start of the Gallente-Caldari War in YC110

Ships can be built and stored in stations except for super-capital classes. Gates and wormholes are methods of travel that propel ships over great distances inaccessible through conventional means of travel. Capital class ships can use their built in jump drives to travel these great distances. A cynosural field is used to provide a target for the jump capable ships to lock onto.

The hitpoints of a ship come from its shield, armor and structure. Shields are absent from certain NPC vessels, however all capsuleer ships including capsules have all three defensive systems. These hitpoints are used for Tanking against incoming damage. Nearly all ships have module slots, allowing them to fit module types such as (but not limited to) guns, repairers, plates, electronic warfare, cloaks, rigs and afterburners.

All ships have capacitor banks, similar to a gigantic battery. The engines charge these batteries and the accumulated energy is used to run modules and power the warp drive. 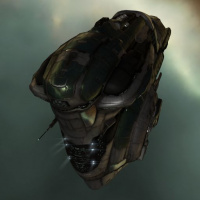 The Sin, Black Ops Battleship which requires months of training to fly.

In most cases, the prerequisites required to fly bigger ships (by hull type) are faster to train for than the prerequisites required for higher tech levels. As a result, newer pilots may find themselves in large T1 ships (battlecruisers or battleships) long before they can fly a T2 ship of any size. This is not a hard-and-fast rule, though. It's perfectly reasonable to train straight from T1 frigates into T2 frigates, for instance, without ever training the skills required to fly larger T1 ships, if that is your goal as a pilot.

Being able to fly a ship, and being able to fly a ship well, are two very different things. While the command skill may let you get into a ship and undock it from a station, this is only the first step in using a ship properly. In addition to the skills you will need to fit all of the guns and mods you want to use, there is an entire suite of Support Skills you should read about as well.

Ships are merely empty hulls just waiting to be equipped with all of the guns and modules that enable them to do a job. The process of equipping a ship is known as "fitting" the ship, and it's an expansive topic. The Fitting Guidelines is an excellent place to start learning about fitting a ship.

However, one basic concept is worth mentioning here as it ties into the ship sizes listed earlier. The ship sizes are grouped into small, medium, large, or xlarge. When browsing the market, you'll notice that modules and weapons are also grouped into these same sizes. When fitting a ship you normally want to use modules and weapons that are in the same size grouping as the ship size. This can sometimes be confusing, especially with weapon systems, as many items may will say "medium" in the name, but actually belong to the "small" size group in the market categories. What matters for ship fitting is that the market category size group matches the ship size, not any terms found in the item name itself.

Ships can be categorized in many ways, this section will cover the most basic methods. The examples given are not a complete representation of ships in EVE. It should be noted however, that more expensive or bigger doesn't always mean better in EVE. 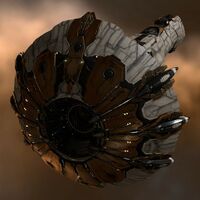 An Avatar, one of the largest ships in EVE. Almost 14 kilometers in length, it is over 200 times longer than the Punisher, an Amarrian frigate.

As ships increase in size they gain more hitpoints, theoretical damage and module slots. They sacrifice mobility and damage application against smaller targets. The sizes (with a few example ships) are as follows:

Some ships that don't fit or are hard to pin down in this classification are certain Industrials and ORE Ships. A common simplification of this classification is calling a Carrier, Dreadnought, Supercarrier, Titan and Rorqual capitals, while calling all other ships sub-capitals.

This table is meant to provide a basic comparison of ship classes - for example, that "bigger is slower, but has more fitting slots." Characteristics that vary widely have been omitted. For example, bonuses can make drone capacity or scan resolution much higher or lower on one kind of Cruiser than another. (These often turn out to be the characteristics that define unique uses for ships within a class ... e.g., "drone cruiser", "ewar cruiser", "exploration cruiser.")

Note that the following numbers are averages; drawn from a sample of four ships in each class. 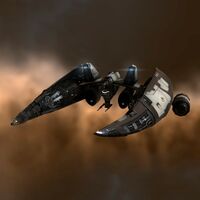 An Imperial Navy Slicer. A common sight an areas with small gang and solo PvP activity.

Tech levels refer to the complexity and rarity of the materials required to build a ship. Faction level indicates the origin of the design. Navy faction means the factions with legal navies by CONCORD standards(Gallente, Caldari, Amarr, Minmatar) built the ship. Pirate faction means outlawed entities(Sansha, Serpentis, Guristas etc) have built the ship. The only exception to this are the Sisters of EVE who build pirate faction grade ships but are not outlawed. Here are some examples:

Tech 1 ships are the baseline for all other ships. They are cheap and are built with knowledge available to the galaxy. Navy faction ships are essentially amped up versions of their Tech 1 counterparts, although sometimes their strong features are traded for other advantages. An example is the Drake Navy Issue which trades tanking ability for better damage projection.

Tech 2 ships are built using rarer materials and while their hulls are taken from Tech 1 ships, the way they fly and take advantage of fitting may be very different. They have higher resistance to incoming damage and are more specialized in their roles as a general rule of thumb. A lot of special modules can only be fit on Tech 2 ships. The Heavy Interdictor is a prime example of a Tech 2 ship filling a specialized role.

Pirate Faction ships are Tech 1 ships that were modified by, unsurprisingly, pirate factions(note: Sisters of EVE is an exception). Over time capsuleers adopted these ships for their superiority over Tech 1 ships. They generally have a bigger tank and better damage application. They may also sport specialized bonuses to certain modules. The Vindicator is praised for its stasis webifier bonus and massive damage output. Their downside is the price tag because blueprints are scarce.

Tech 3 ships were developed by the four empire factions after reverse engineering Sleeper technology. They are known for their often superior tank and versatility which comes from a special set of modules called subsystems. All materials required for Tech 3 ships come from Wormhole Space. As an example, a Legion can be fitted to be a well tanked neuting ship, heavy assault missile boat, or the more traditional laser boat. There are many other fits for it, depending on what the pilot wants to do. 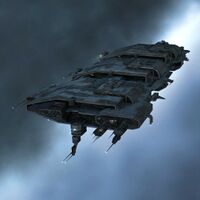 A Charon. Prided for having the largest cargo bay across the spectrum.

Not all ships are designed for aggressive action. A subset of ships with increased efficiency in resource gathering and cargo hauling are in wide use across the EVE universe. Here is a loose listing of these ships.

These ships have large cargo capacities and are used to haul goods from place to place. Some are even more specialized, having extra capacity for such as ore, minerals or weapons. The smallest class of cargo ships, T1 industrials, are lightly defended and fly mostly among high security systems.

Tech 2 industrials are divided between Blockade Runners, which are fast and can cloak for use in low security space, and Deep Space Transports which have stronger defenses for hauling expensive cargos in high security or scouted low security space. Each EVE race has one of each kind of T2 industrial.

Freighters are the largest cargo ships in EVE. These slow moving hulks have no high or medium equipment slots and depend entirely on their massive hulls for defense. In general, if you can package an item, you can fit it into the cargo hold of a T1 freighter.

Tech 2 freighters are called Jump Freighters. They have smaller cargo bays than T1 freighters, but can use both jump gates and cynosural fields. The latter makes them especially useful in null sec.

While not intended for combat, ships bonused for mining can mount light weapons or carry drones suitable for defense against belt pirates.

The Mining Barges are usually the next step in the mining profession. Each of the three is bonused for a specific use in asteroid mining.

The Exhumers are the top of the line in specialized ore extractors. As with the Mining Barges, each is bonused for a specific use.

The Expedition Frigates specialize in ice and gas harvesting.